Just hope I’ll not be banned for this little screenshot from my PMs.

Okay… See the video below. 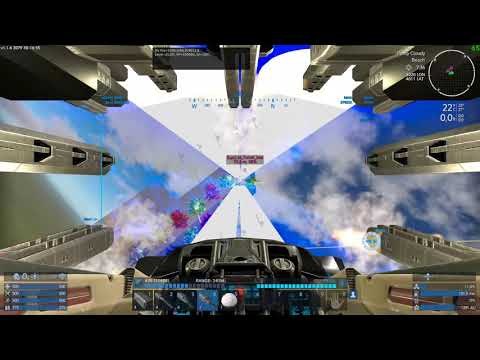 Now let’s talk about it a little. In my opinion HWS PvP config is just awful now, it never been worse (as far as I remember). Homing weapons are so badly implemented they can’t hit anything for real now. I have no idea why @RexXxuS changed it in last days of previous season… I mean, he said its because of “lagshots”… in our PvP community we call Rex’s “lagshots” like “splash damage through the blocks”. I doubt that I was able to convey what a lagshot is for real

Yesterday I met @Politary in HW Space, wanted to see his CV. And what do you think? It’s naked skeleton, designed for only one thing - Shift+Q evasion. This gives me reason to believe RED and Politary lobbied heavily for config changes towards the Dumb Propeller tactics. But I can be wrong here, just my thoughts.

After some time Poly left his CV and chased me on SV with marius. We got a little fight. Poly SV is kinda bid solid brick, but my 135mm H-Msl’s were missing it too, not all the time but maybe 50+% shot were evaded… in the last moment they just change direction and fly away. I was very disappointed by this fact. Fight ended in nothing and we scattered.

So, I just wanna say it’s very dumb and boring play on such config, when you can’t hit a thing really. But since Shift+Q dumb spin is legal (btw on the video i don’t even press Shift+Q, its just only Q) we are preparing attacks on hostile bases. But I’m toooo lazy, so we need many time to prepare it. What is our plan of actions:

The main question here is: how many hostile PvE players will forbid the game after “dirty cheater and exploiter Ice” will wipe their bases one by one in the morning, when online is not so active?

Why I even start this topic? I just want old PvP config back, all the speeds and weapon effectiveness, it was sooo nice and pleasant to play. There were no chance for dumb propellers in old config, they all died very fast. You can actually see hits on my video, but they do minimal damage. It’s hits from Cannons and Miniguns, because of their projectile speed.

Well, it’s pretty much all I wanted to say. I hope common sense will prevail. If i get banned for this topic that means HWS is spoiled…

Then go and make a “meta spinning ship” and see how it works against good player in normal pvp bait brick.

You encountered my cheap cv btw which i made when i was playing on 3g modem and had constant crashes. It’s made for killing miners and will suck in pvp combat against good player. Not a secret as well, i’ve been using it for seasons now.

I’m not interested in dumb propeller wars, I’m out of PvP on HWS until cfg or rules will change.
Also I remembered something.

Uhmm, simply: Adapt and overcome.
Maybe it is not the Config in need of change, but your Playstyle.

Loud words and no proofs. You saw my miner that’s not even good and cry that config is bad. Make a proper ship and see yourself. Btw, i had no problem hitting your sv with my sv.

Btw, i had no problem hitting your sv with my sv

i was playing on 3g modem

Not a single doubt

after doing some pvp the last days, i can say it ike this! Anyone remember the LIM cheat in old Wolf3D? Shift+q gave me the same feeling!
I can beat everyone, but this time it is not from a magasine i bought called cheats and tips, but from a totaly legaly tip i got ingame!

I se Ice point here, but i do not see any solution to it, other than that eleon start to take pvp serius!
Lets be honest, eleon have never cared about pvp, and rexx has worked his ass of to try and make pvp work on hws. But it do not, and it will never do with the curent coding!
DU is 2 says old public, and do it better!

to be fair the test ship was not a “legal” build with floating generators on the outside. try it with blocks connecting and it may make a difference. shields drop when any block is hit. also if there are players defending the base, it would be quite rough to constantly spin and avoid manual fire that is directed at the center of the ship.

Old CV config made the “propeller” builds useless, from everything I’ve heard. Or at least, nobody ran them because they were too easily defeated. Now, with Rex’s config pushing towards using turrets (because manuals suck at killing turrets) to kill ships, turrets are useless if a ship is properly made like this. Manuals still work, yes, but at that point lets just go fight SVs.

Those generators are legal, Bob.

wow. ok, last i knew floating blocks are not allowed.

They’re not floating. They are connected to the ship by blocks.

ahh can’t see them on my tiny phone screen… getting old sucks. i don’t recommend it

Sv fights are the past. I reported udp manipulation, nothing was fixed.
And now cv fights are also exploitable by using some dirty tricks that were not used b4.
Thank you guys, u win i guess.

so new tactics to get around broken game mechanics are considered dirty? not sure if i would consider it an exploit to adjust to the changes we have been given. lots of valid tactics we use now could be considered “dirty” in some eyes. i don’t blame those who use their brains to outwit their enemies. if a mechanic is considered to be “unfair” or “exploitive” then it can be discussed and adjustments can be made. no need to call out anyone for trying something different. isn’t that the essence of evolution?

So whole galaxy of spinning ships is an evolution to you? It is stupid and i dont enjoy playing that way. Be my guest if u want to.

not a tactic i would use no. but i see nothing wrong with someone wanting to make themselves puke from dizzy spells. adjust ur own tactics to combat this, not complain on a forum…oh wait, that’s what we do now. sry i forgot…

Not a big fan of the meta this season, closer to vanilla than it has ever been design wise with the slow rockets ect. The CV Manual Pulse nerf hurts the most though. If Manuals were not nerfed into the ground the spin to win game would be more fun.

I do agree on buffing manuals. Although i think rockets should be main turret killers, like they are now. They need more damage, maybe more splash. Especially agains xeno steel blocks.