RE pvp issues and improvement suggestions

We’re all glad that a little more love was given to the RE server this season, it is the most populated half of the servers afterall, however there’s still a few glaring issues that need to be addressed that are relics from being ported from EU/NA vanilla hws -

1.GG is broken. the guilty teleport mechanic does not work as intended, it fires you off to random planets and then drags you back and keeps doing this in a confused buggy way, sometimes with your ship sometimes not.
the guilty mechanic itself is a relic that does not make sense in RE- would be far better to drop it, and replace it with just a simple SHOUT in the global chat when someone is entering the guilty area.
you do not need to artificially stop people leaving pvp anymore, they cannot warp when under fire since several version ago, all it does it take the fun away from the experience having to learn new chatbot command to type while underfire! terrible for player enjoyment, which should be the main focus of everything you do really when creating a server - is it fun? no? everyone hates it? then drop it. simple

suggestion:change guilty mechanic on GG to just a simple broadcast, no teleporting, no blockading retreat artificially.

suggestion:- add traders that buy optronics and scrapyard traders that buy parts, add electronics factories, the ones that sell superconductors.
add the rich asteroids and dense ice asteroids to the space.
increase the amount of RP the pvp radar bases give everyday to 25 and have it go up by 5rp everyday the base remains operational, this will encourage people to build and defend real bases rather than just dropping down slabs of rock with radars inside.
you could also add the stronger indestructible poi that drop decent rewards, like quantiums.

suggestion- take the values for an advanced armour with normal boosts in as a guide value to set your environmental variables against to make it so players have a fair chance of preparing themselves. even if it means they have to make a set of armour just for the job.

suggestion - deathmatch events, battle royal event, towerjump event and others all should all work on re, let me know if you need help adapting any models, I would strongly recommend asking people what they think would be appropriate rewards before setting them.

suggestion: provide love to HWS+ before considering postponing the wipe…

RE its PvE server and we plays here because its pve server. 0.01% there mean if you want pvp you can pvp with someone who want it too. For this, players are given one star system and this is more than enough.

There should not be any serious rewards and incentives for pvp activity on a pve server.

in a PvE server what other people do shouldn’t matter to others. especially rewards they get from PvP. no reforged was not made for PvP at all, we added that element just like all the other hws elements. but honestly I would rather see the main servers get some attention. they have been neglected for some time

there is an economy, trade between players, competition for rare loot and resources, so no, everything a player does affects all other players.

provide love to hws+? what you on about? its not even out, it doesn’t exist yet.
its just an idea. RE is here, now. we’re in it.

I would very much like a pvpve RE server.

who is the “we” that you speak for?
and by what logic is that “more than enough”?

“there should not be any serious insentives for pvp” - why?

the “main servers” are the RE servers now.
the other 2 might as well be closed down, they’re dead, must be costing Rex a fortune to run those 2 empty 150 slot servers 24/7. cant imagine they’re still turning a profit of any kind, the money must be coming from RE 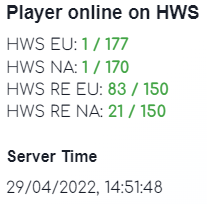 but its not a pve server… and doesn’t need to be, why would you want to take out such a big part of the endgame?

“there should not be any serious insentives for pvp” - why?

because its pve server

who is the “we” that you speak for?

me, my friends and my fraction members

pvp brings a lot of negativity to the game.
We don’t want to read once again a showdown in the chat about who vilely killed whom and where, who fights honestly and who doesn’t, who has a hard skill, and who is a pve crab, and so on.

If on the server 0.01% pvp is a friendly duel between those who agreed in advance - then this is a good opportunity to spend time. Lure people to pvp for a reward? Please do this not on a pve server.

and by what logic is that “more than enough”?

I see no reason why a friendly duel “for fun” needs more than one star system. even one sector would be enough

I’m not saying that the ideas are bad, it’s just that pvp should not give any advantages and serious rewards.

Expanding the possibilities for fun is good.
Implementing something that allows pvp players to gain an advantage over pve players on a pve server is stupid.

I doubt anyone could compete in pvp without first completing all the pve content to get the weapons and parts to build their ships. they’d be foolish to do so if they tried - unless they happened to encounter someone else with the same idea

it should be an extention to the content, an extra bit of endgame, not an alternative route to get there. something to spice it up a bit.

I think we’d probably all agree that players should not be able to skip any pve content by doing pvp.
the problem is that some of the systems the RE server inherited from the vanilla hws dont really work here, regardless of option of the expansion of pvp the guilty mechanic on the current GG(RE) is outright broken whatever way you look at it, it either needs fixing or replaceing/removing, warps you to the starter planets for some reason when you try to leave. along with a few other random spots, our doner planet, ecc. and others.

a lot of players have been waiting for hws+.
After all its hws that bulk of us joined and the stories we tell, reforge is a good and very different playstyle, many good points raised for improvement but i personally think hws + is the priority.
After all its Homeworld server we come to play not reforge eden

are u suggesting rex just give up on his own universe and focus on the “new shiny” of the moment? u being an HWS veteran should understand that the current player count doesn’t mean squat for “popularity”

over the years we have heard “the server is dead because of XYZ” but it seems to explode shortly after a wipe. this is fact.

all i am saying in there is a large chuck if the population that has been frustrated at the back burner treatment of the HWS main servers (yes they are the MAIN servers.) even this post is yet another time consuming adventure that will take Rex’s attention away from his own project.

RE is currently running with the latest update and being enjoyed by many. can we be focused on the broken universe so the rest of the community can enjoy what we came for also?

perhaps u do not understand the difference between pve and pvp. when u use the word “competition” u are referring to players vs players. what others gain in pve does not affect others at all. only those who have make believe competitions to be “better than them” on their minds. if u don’t participate in PvP activities, u have know right to dictate what should or shouldn’t be.

the “new shiny” has been the main server for over a year now, its not new, or shiny, its just good, I’m sorry if you dont see the appeal, there’s a reality check that’s needed here I think for a few people.
It is the main server now, you cant even compare them, one has like 0-20 people the other is frequently maxed out 150+ and has been for over a year.

RE has been playtested by more people than any other Empyrion config, and has 2 very dedicated and talented people just making content for it nothing else, who actively play the game and engage with the whole community in an approachable way to take onboard their feedback, and that’s all they are doing, they don’t have to then also dump thousands of hours into solving admin tickets because they don’t run servers,
which is why the RE config is so much more advanced than the current HWS EU/NA config dispite being younger, which lets be honest was stagnant even before TEAMS(years ago now) was added in, which was the last real thing added, and had massively drifted away from the games core play loops over successive updates, things it had shortcutted where now part of the meat of the game, things it had tried to augment had been added in full to the core game, over the years it just got more and more detached and weird as a config, the poi were all random loot boring easy ignorable, the story was fractured and made no sense, the lore was all over the place, the balance was way too heavy handed and the pvp was just a cartoon by the end of infinite tanks fighting over nothing.
Which I’m assuming is why its getting 86’d and hws+ is being drafted to replace it.

so yes, it would have been far easier to just make a HWS RE+ config, and merge it all onto 1 or 2 servers, rather than having 4, and it would have been done by now.
hws+ now not only has to beat RE content, it also has to beat so hard that it makes up for messing us around for over a year, and thats going to be very difficult for one stressed out dude with no time on his hands to achieve vs 2 dudes that do nothing but happily work on their content.

maybe if HWS gets some help gets hired on to assist in the coding backend and testing it might get there, who knows.
all I know is I’ve done enough unpaid software testing in my time being presented prototype products to bother doing anymore, personally I would probably wait a season or two before even trying it out so at least the most major bugs have been worked out.

again. PvE means player vs environment. what others gain for rewards does not affect others at all. there is no "competition here. only the “fairness wars” in people’s heads. PvP rewards should not be dictated by PvE players.