this announcement is very important to us / me, so please read carefully if you are interested.

As you might have seen we replaced the word “Donation” with “Support” on the most places by now.
What started really that way, it became more and more a bigger incentive for you to give us your hard earned money and for us a way to focus even more on Empyrion / HWS.

So technically we like the word “Support” here since it shouldn’t be seen as “buy / shop” relationship but way more personal — voluntary in the first place.

Some of you know that I am an educated Web Developer / Graphic Designer and earning my money for living here and there doing websites for customers.
But my real passion were and are always Games. I’m not only a decent gamer but love how you can create a virtual world, so many players can get “soaked” into it, making them even happy here and there.
Being creative and combining all my self taught skills in one thing is basically “living my dream”.

That brings me to the point to realize that the short time I have per day is filled mostly 18 hours with Empyrion and HWS.

So to make it short: by supporting us with money, you are not only helping us with the high monthly server costs but also for allowing us/me to spend so much time for you, HWS and Empyrion - making it for living.

Otherwise I have to go back to coding websites for customers or themes for Envato, which would give me way more money but yeah, for now I really enjoy doing all of this for you and Empyrion which some plain stats can’t hide I think

Anyways, behind all of that are also taxes I have to pay for my business W3DG to EU / Germany, other bills and more, which brings us to the point, what “Support packages” we have and how we can ensure that my personal stuff does not influence your gameplay in a bad way!

Note: that is my position and does not reflect @Jascha’.

To the point: some have the opinion that HWS is “pay to win”. Well, most of them don’t like me / HWS, got banned or for whatever reason and like to stir the pot up.
They don’t see the meaning that without Playhours and Reputation Points most of the Supporter Packages are useless.
And for the rest we tried our best to keep the balance with either limits (Supporter Playfields) or other free options such Daily Loot, Vote reward and more.

But the point about “pay to win” is rather what definition you go about it - how can you “win” in PvE, since we have a mixed universe and missions where you can get rare resources, special ships, etc… Or how can you win in general, if a survival game means in first place “Spending time” on a server to achieve something.

So for me it is in fact “pay for time”, which is of course an advantage, since time is the most important thing but it shouldn’t “win” in PvP AND it should be also possible to achieve with ingame progress, which at the moment is not possible for all Packages.

Here is where our big rework comes into play 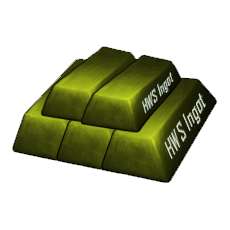 We will implement a new “Currency” for every HWS Player to be able to check with “eb:info”.
HWS Ingots will give you the possibility to “pay” for HWS Supporter Packages — yes, instead of real money you can get every Support Package also with the ingame currency HWS Ingots.

So as you can see not only Reputation Points will finally have a real meaning as I told you since almost two years but in fact it should give you the understanding why we have chosen the word “Support” and that it means for us in a bigger scale that you just spend time on HWS and enjoy your stay.

Now there won’t change that much, you still get your 465 RP Vote reward per month, basically real money then and you still get plenty of ECC Missions where you can get RP, etc.

We are not here to get rich nor do we want your money so badly - we want that you just enjoy your time, playing a great game and have fun with some crazy ideas we came up with

Overall you can still support us with real money and we appreciate it more than you can imagine but loyal and active players will always have the upper hand in the long term.

That all being said, I hope you got a better understanding about that subject and we really like to hear your feedback about it! It is not “new” if you think of Payback Points for example but what are your thoughts overall? Good? Bad?
Please give us your feedback!

P.S.: Teasers and Infos about the next HWS 8.X season are starting probably tomorrow! Big stuff coming so stay tuned

I’ve given this a quick read and i’m cautiously optimistic. I for one am grateful for all the dedication you put into Empyrion, and it’s only fair that you are financially safe in what you do!

I’ve only just realised that HWS ingots cannot be bought. This is awesome!

I also LOVE the way these are earnable in game; that’s really awesome for those who are strapped for cash in real life!

Keep up the amazing work Rex

This is gonna be great for the RP containers in market.

This would give RP a greater meaning again, instead of judt having 500+ useless RP

The rp of this season are converted in ingots or will start from the next?

It sounds good that there is another way to pursue the support packages. I dont agree with the pay to win arguement but this shuts down the debate in a nice way.

Would like to know about this too, I have prepared carefully to count on the credits from RP at the end of this season… would suck if it all vanished.

Can you withdraw your HWS Ingots and trade them with other players?

This makes sense for so many reasons but I have to ask.

New goal, beat this persons record next season. Thank you Rex. I have a reason to pay again! Also I would love to see some kind of leader board for RP or credits traded etc. Not just kills.

Hey Rexx great idea!!
Do you plann to make those ingot tradeable? Or can for ex 1 faction pay a plant with more ppl(because a planet is something that an entire faction uses)

thx for all your effords

Can I shoot people and take their ingots?

Genuine question though - will the ingots be carried in our inventory/cargo boxes or virtual even in the virtual realm like our credits?

You really touched on something RexXxus even if you didn’t mean to. There is no ‘winning’ in Empyrion only surviving. Which isn’t that hard, even in PVP. With the exception on season 6.5 and 7.0 I have rarely died more once a season due to PVP. Only in season 6.0 when the starter planets had an insane amount of NPC bad guys was survival even a challenge. One of the things I liked about 6.5 and living in MOBA space was the 500C outside temperature in space. My friends and I died so many times trying to build our space station and repair our ships.

What I am getting at is what if planets or space (PVE or PVP) had some real hardcore PVE style survival problems? Like GG having 50 Rads or just swarms of NPC’s on PVE planets etc? or small Fleets of NPC cruisers in BH. Just a thought.

In order to die in PVP, you really have to actually set out with the mindset to DIE… if you’re a vet. Its so easy to escape death I find I only die when I go all in/ commit to a 1v1 or base attack.

hopefully this does not mean, that garage ships will be the best pvp ships. Because as I’ve said before building is what makes Empyrion… the creation aspect.

@RexXxuS The only bad I can see with this system, is that when we go into the guilty zone… we lose RP to become not guilty. A real negative when it comes to RP having meaning… which is more of a negative for pvpers when they get guilty (when they are lawless)

Lawless wouldnt care about their RP… if I am to roleplay lawless.

Is the RP system gonna be reworked?

1960 * 3 = 5880 RP by trading actively with the RP NPC Trader I have placed in the universe by assuming you get/trade 10 Origin Alien Containers per day.

Is this a feature currently in the Universe or a coming feature next season? I still have not explored all the missions and instances so maybe I’m missing an easy way to get the origin containers?

Concerning Donation vs Support the English language can be interesting. For me even though the link and packages said Donation in the past I always saw it as Support in terms of meaning.

Overall it is great to see these new improvements and additions. It keeps the game and the community fresh!

Nice move rex… With the up coming POI’s making them have a RP rewards is a great way to keep people interested after they build their CV. Keep up the great work.

As much as I’d like to murder somebody and steal their ingots, these should be trade-able but virtual, exchangeable with players in the same way that credits are sent via EB:send.

If these are solid items which can be looted, then I assume it’ll only generate more negativity than positivity. One bad recruit to a faction could create alot of drama if they got their hands on these

As well as physical issues such as duping and so on.