Some good news to those who worry

Did some testing on the new version took my recent class 3 CV (Almost class 4) spawned it on the new version and the ship showed up as class 9. Replaced all slanted interior blocks with full squares re-saved it and now its showing class 2:

So basically if class cap stays at 3 then we can now build bigger ships than before but with 4.8x less triangles slowing down our speed, sounds like a win patch to me. 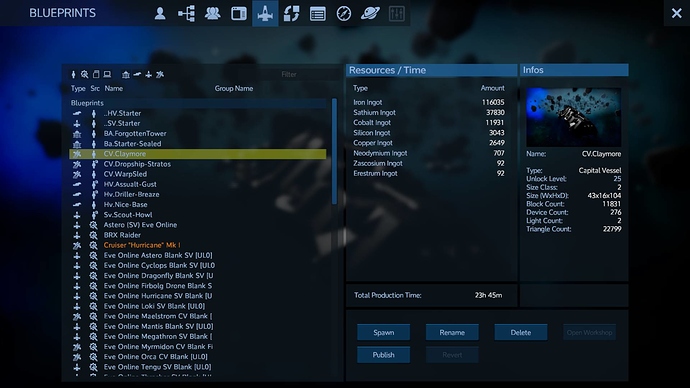 Seeing how many blocks can be optimally placed per class lvl:

Base Requirements per class:

5 Lights (to accommodate grow plots + 2) (shouldn’t need much farms on a Battle CV those should be on a BA and then fridges on CV.)
Max’ed Guns
10 x Large ammo Crates
Enough power to ride in space using 12% power to make sure it will be fine under gravity conditions.
Enough Fuel storage for 1 hour with everything drawing power.
30m/s in every direction (Thruster count)
Enough RCS count to be decently agile (More added for each class.)
4 Constructors 30 double cargo boxe’s (Should be plenty for anywarship, anything more and its more of a carrier than a battle cv.)
27 grow plots
and using 50 passanger seats to make up device count for other stuff people would use.

Then stacking blocks and re-adjusting thruster count / RCS / fuel / generators to keep the balance up.

And making sure there are some gaps between blocks to be a little more realistic in terms of block density.

I dont believe a blanket statement can be made. Mileage will vary depending on ship design. I worked this weekend on complete gutting and rebuilding a cv using the new formula meta - mostly cubes and the usual minimal lights, devices, no windows, etc. Ended with a one device below class = 4 cv that reminds me of a dog turd. Nope - not happy with it. Made a lot of compromises to keep it a 3. 135k iron. 45k triangles. My previous class 4 (old formula) used a lot of pyramids - hit 171k iron.

Not disputing your findings with your ship - just saying it may differ for others.

Yea I understand what your saying but remember the admins could still decide to up to it class 4 which will still be smoother than old class 3 but you’d have a lot more room to play, it might even be equivalent to old class 5/6 in amount of blocks, also since triangles are weighted between 3-5x less than before you could sacrifice a few devices for a lot more blocks, going to test.

P.S not all under class 4 ships look like dog turds xD
I think my class 2 looks alright ofc a higher class will smoothen it up abit thou 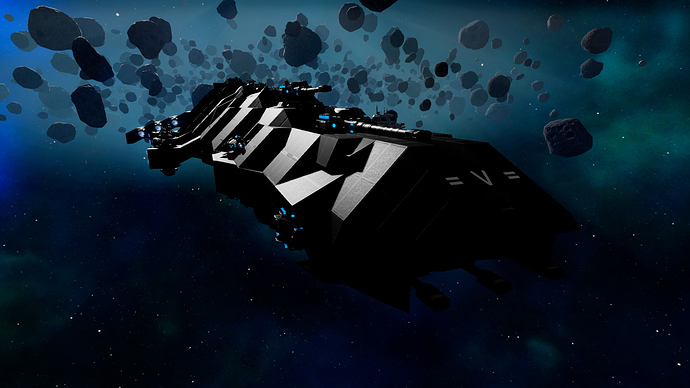 Yes - and rexxxus posted earlier today that the cv and base limit may be set to 4. Keeping my fingers crossed on that possibility. Class 4 will be able to change dog turd into something that smells like roses.

I hope, class 4 would be nice. But I’d be equally okay with current. Class 4 Borg cubes might be impossible to kill though.

Well if you like an Cv with no lights, no toiletts, barely any interior at all, fine by me! just really sad how Eleon destroyed an perfect game that needed some tweaking on performance part.

My advice is that Rexxus make an rule that you maybe have an certain amount devices on any size class ship so even if you have alot of blocks you can place some shiny windows and lights without upping the class.

That could be achieved with a block limit and unlimited class, but then people will go overboard and have 200 toilets to cater for their crew of 2000 on their cv xD and kill the server, I think with this update the dev’s are heading in the right direction thou. An option Eleon has is to create lights just for athestics that don’t actually have photon scattering then you could have 2 normal lights and 50 of these fakers if you really want, could be cool.

Not really, my advice is that ReXxXus make an ship limit, you can have max 1 cv, max 1 sv per player.

i think we are a few years from that, maybe if Eleon used unreal engine instead of unity then yea it would be fine lol…

Well the question is, how did ReXxXus older server handle the mega big cv’s before? with even larger universe etc.
You do hope the technology improve as time goes…

there was only 25 people playing and the only one with big cv was you and a few other guys not everyone, back then most people where poor and only a few rich, now everyone is rich, most people can dump 200-500k iron on a cv easily. If on the other hand CV parts became 10x more expensive then class size wouldn’t need to be limited as not everyone would be able to reach the cap, but then you’d end up with rich imperials vs poor rebel scenario xD

Well for that i blame OCD and their policy to let people keep the unlimited limit, even when its capped at 50k, people have probably 10 million of each stored still… and the bank, i dont even wanna go into it, losing an ship in todays universe is like a small butterfly, comapred how hard you had to work to get an cv going before, i could mine for days to make an normal size cv…

Yea I remember had to live out of my sv most days as I was too poor to build a decent cv lol, but it was fun. Would be great if a massive CV was actually an accomplishment thou and not a daily need, something you worked weeks to make. xD

Well people are throwing mega cv’s away in here like its nothing, when peopel are raiding bases they just come with swarms of ships and keep respawning them, with the interest of the bank aswell, they can keep doing it forever with no need to mine again or such alike! last time i checked it said HWS hard universe… its not hard when evrything in the server you can buy for ingame money, i could find all i need on elemental planets to fuel any base or ship, i dont need to go to an hostile planet to mine some precious minerals…

I think its just power creep kicking in, (2.0 had the best resource vs pvp balance I think, maybe i’m just a die hard 2.0 fan xD) only way to get it back to a good balance again is Option 1: wipe everyone and remove place-able autominer’s and have everyone mining with t2 drill / hv /cv again (Effect) People feel they have lost valuable time that they spent collecting everything again. Option 2: Raise the build cost/price of everything and lower interest rate to 1% every 3 days. (Effect) Bigger gap between the poor and rich but… the poor will have something worthwhile to work towards and aspire to, more progression, less waste people won’t be throwing half broken cv’s away when they are worth so much time. (Effectively everything can be measured in time).

Well the sad thing is that as new player in HWS you never catch up at all, you always be the one losing, let me take an example here even tho he have been very lucky and in good faction that raids alot and get him stuff, Wiseman! is an good example of an New guy or not so new anymore but he was, i saw him grow, but he had tough time getting his bank up and running, for him 2 millions was hell alot and he was mining gold day out and day in to just have a living, while others the rich ones, get the same interest doing nothing as he gets for an weekly basis if he mines all day long… isnt that super creepy?

Yea, the way it is now reflects real life a lot I think and we play games to get away from that xD If interest rates where lower then at least the poor could do bank heists and stuff to eventually catch up to the rich, but with interest its litterilly impossible to catch up until a new season hits when they caped at 70mil, but tbh that’s not really a cap as many have shown already that putting 20 peoples 70 mil’s together then using the 5% daily interest they all get crazy amounts pretty quickly (tesla im looking at you, you uber rich bastard xD lol)

Well there is also an super unfair game, i heard some people made several characters to be able to store even more credits, well if we only made inflation ingame aswell, economic crashes banks collapsing making people lose all their bank credits, and need to store in their personal vault, which cost the raider 10m to raid if he finds it, more gamble like that is what i like since you never knows whats inside of it… could be nothing? or…