Some thoughts about Eton event

Let’s just face the truth - Empyrion in its current state can’t handle massive battles. Yeap, maybe after 10 more years it will be perfect, but now its not.
I’ve finally upgraded my GPU so i can actually play a game now and I jumped right into Eton today. Rex always saying HWS is need to be comfortable and fun to play. But Eton is not fun now, as I think. All I heard in our voice were only swears (well, as always but a bit different

). They were about really heavy lags, different bugs, disconnects, unable to connect back again, turrets didn’t shot (were loaded and guided), low fps, long freezes, other players were moving by 30 meter jumps. I even discover a new bug, i took my minigun to slot 1, select it, pressed LMB… and nothing happend

It started shooting only after ~20 seconds.
So our guys are tired of it all and i think we a close to ignore this event, cause zero fun right now. As I know U-T already ignoring the even because of heavy lags.

This game has very simple law, less objects - more smooth and adequate gameplay. So here’s my suggestions.
I think we should think about new limitation “max alliance players on playfield”. In my opinion perfect number is 5. Today’s tactics is to push through with mass. For example, you can put 10 monkeys on HVs and they defeat 3 skilled players no problem. Benefits of that limitation are obvious. Less players on playfield - less lags (btw if 10 people wanna play, other 5 can go to GG for example, or make logistics, preparations, support in space, etc). You can’t win by mass in that case, you need to use skill, teamwork, etc. Minor factions just have no chance now - they will be defeated by one big 100%. If number of players will be limited we could see different interesting combinations.

If its too radical for you, we can just reduce current limits. 20 HVs + 20 SVs for alliance now - its too much. And why so much, what for? To die in lags? Its not very interesting as you might think. In my opinion 5 for faction, alliance, both SV and HV.

So today I’ve seen lagged turn-based game with random turret fire and was bored, to be honest. 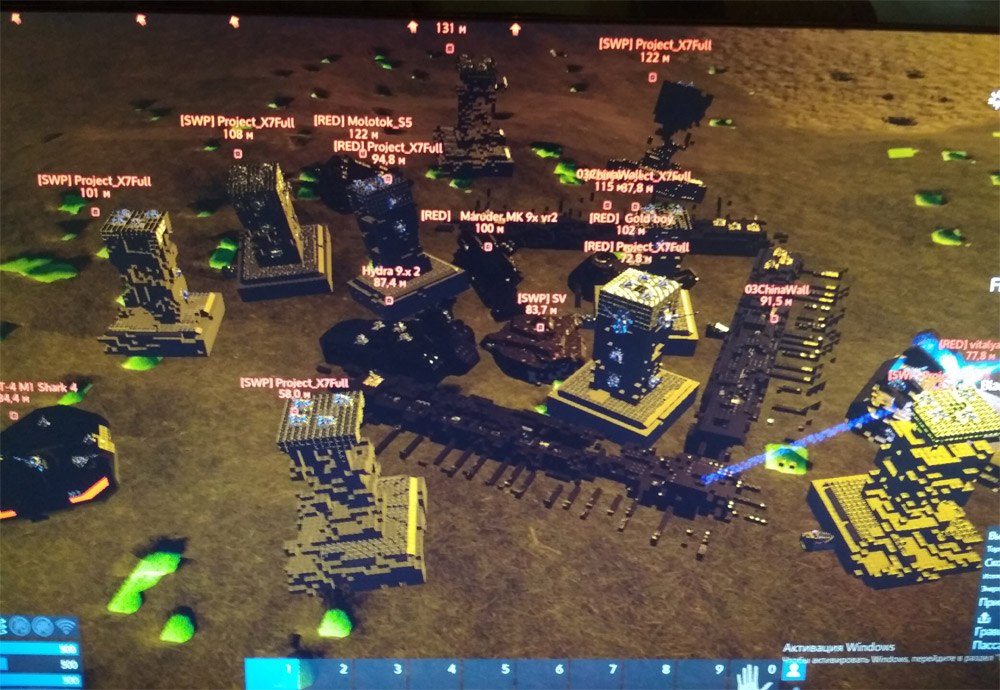 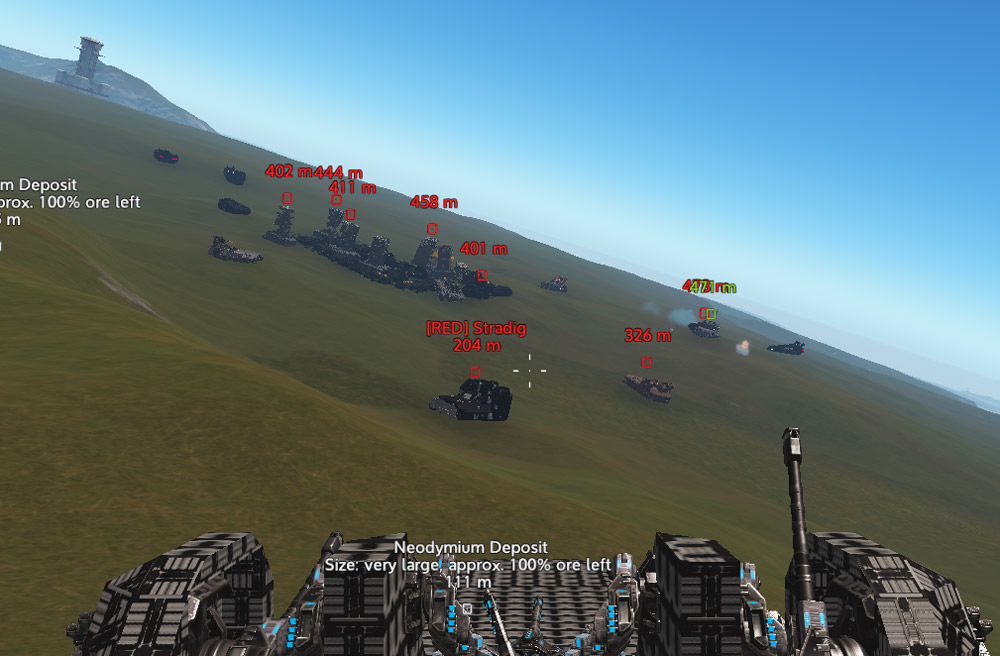 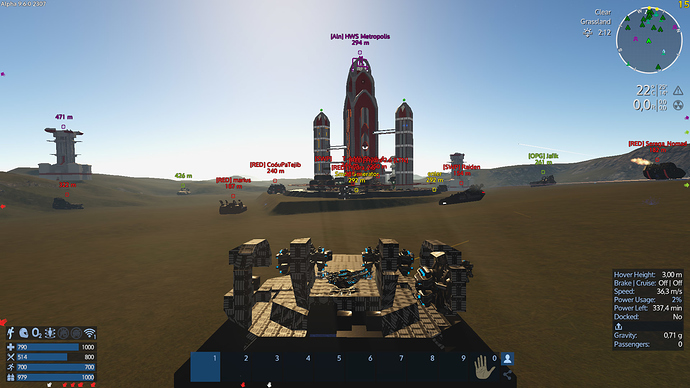 I think it is worth writing this information on the official site of Eleon.
I have a video of this fight, it really is something awful.
Let the creators think how to solve this problem.
This is ridiculous, such lags are due to 40 buildings.

Thanks for the feedback.

Feedback about it is also here: HWS Season 9.X feedback so far

The thing is it was very unpopular in the previous seasons and only got interesting and big contested this season. I didn’t know all of that and 20 player PvP every day is of course a big challenge for Empyrion. Some PvE servers don’t even have 20 player population…

So, on EU and NA we have big battles now.

We can also play with a high Gravity to increase skill

I think we should think about new limitation

But… what about… the great story here?

Just trowing my 2 cents here.
I think that HV are the real performance killers especially gatling/miniguns turrets
We can also try to set to 0 the limits of gatlings (since only ping ping ping and zero damage anyway) I really want to see the same scenario but with 15mm banned before cutting the numbers of people that can play the event.
A good number balance wise of performance can be also
5 HV
10 SV
1 Capital vessel class 1 (i am using one on GG and having a lot of fun with it) Also U-T started using it and one planetary attack main CV is something wonderful.
1 BA elite builders league. (when getting the Metropolis need to be abandoned or will be taken)

Previously, there were also battles of a large number of players at this event. There were no such “lags”.
They arise because a lot of ships have gathered in one place. Yes, we have allies that help us, and this limit is important to us.
We can not put the BA, and forced to collect it from HV. We have a lot of players in the faction,
clearly more than 10 (13 participated yesterday) this restriction will be unfair.

Lags were specifically in 1 place, where there were many ships. With the new limits, it will be similarly lagging already at the seizure of Metropolis, and what will happen next? Metropolis 1 vs 1?

Yes, play hard, but lags. But while we win the event, and do not cry.
If the event does not like someone - do not fly. No one forces.
I watched the video of this fight … not so much and it lagged)

Rex, remember my tiny harmless CV for which you wanted to ban me?

It was 148 blocks in original, can you imagine how we can abuse these limits here?)) We can land 7 class brick to Metropolis and it will be over

So, your limitation mechanics have 2 big issues. And you perfectly know almost everyone abuse it in different ways. Even Paxxo don’t care about playfield limits when he is running for his life and blueprint.

The first big problem is structures without core. If CVs are allowed, i can land huge CV, shot the core and those dead blocks will lie on the ground (or hang in the air) almost forever. No way you can prevent it with your current system. And people can play with it, core and uncore the vessel when they need to. So my suggestion here is to clear dead structures as fast as possible, maybe in 5 minutes or even less, we need to think about it.

Second big problem - vessel’s class abusing. I can see 2 ways here: accidental and intentional. Accidental mean your BP is legal but during fight class rises and get over limit. Intentional is when your BP is over limit from a box. So my suggestion here. If class size is a bit larger (not higher than +0.1, for example 1,6 for 1st class vessel) - keep your traditional timer. But if block count is larger and class size is larger than +0.1, i believe you should take vessel at once without warnings and destroy it (or maybe teleport it somewhere far with possibility to buyout). Because if you don’t teleport it player will shot the core and continue abusing limits. Or similar scenario.

And my suggestion for Eton for current cinditions: 0 BA, 0 CV, 5 SV, 5 HV
p.s. you don’t need CV to land HVs, you can drop them from directly from space.

Sorry for my English

As I know U-T already ignoring the even because of heavy lags.

We’re not. Right now eton just isn’t our target. We havn’t even tried to capture it yet.

Next season, remove the class limit on all playfields and enable the CPU limits. Make NPC Core CPU not more than 1.5 from player core

Out of everything here, I disagree with this the most. Using the CPU limits creativity in the build. I really don’t want to see people flying around sticks more than already.

As far as Eton, I think the balance is more delicate than people realize. You have a PVP event, you get a bunch of people to fight on a planet. There will be lag. It’s empyrion. I’m not a fan of reducing the number of people who can participate in that event but I think it needs to be limited by alliance.
The first step would have to be to allow allies of the original capturing faction onto the planet after the event ends, though. Until that’s a possibility I don’t think any other changes should occur.

0 CVs. Spawn HVs on planet or drop them from space like real men

Just trying to get the most people who want to play into the event. Also, I don’t like the bedrock sandwich layer on this planet.

Keep in mind: these limits would still apply after the event is over. I really don’t think the limits should be that low for a reward planet after the battle

I do not propose removing the block limit. I suggest replacing class restrictions with CPUs restrictions.
Ship classes are a measure of CPU and GPU load. Using them in game mechanics is, in my opinion, a very controversial decision.

faction with a large online infantry can land in metropolis, it is also very fun to shoot hand weapons inside metropolis!

So?.. Any moves on limitations or shall we spawn 20 HVs per alliance everyday?

Looking at the feedback overall, it actually might make sense/be beneficial to set this to an overall of 5 HV 7 SV capped, or something like that.

If you’re in a small faction of 3 assaulting this without an alliance against a larger group, you’re wrong.

If you mess with the gravity here @RexXxuS, you’ll have to adjust the bases too (jumping puzzle one for instance) , dunno about that.

I do fine myself without TOO much lag in large battles and there are a lot of factors that cause lag, such as collisions, my input isn’t about that aspect in general. It’s about that if we have a limitation of 20 HVs on an event planet that has a 3 hour battle, they’re gonna collide (I don’t care how good you are, that’s a small space), and cause lag, lose control, collide some more, then bring on the disconnects.

In addition, if it’s a total of 12, that gives the smaller alliances & factions a shot at winning. It’s an event planet that TBH after I’ve won it I don’t revisit, but smaller factions/newer players could make great use of the resources.

Stick with 0 CV, please. This planet should require some amount of individual preparation to make successful, and excluding garage tanks is a big plus here.

It is useless to ask to apply the new limits without first trying the event with the new configuration.