The only thing i see is lag

so overclass cvs are aka sponges are allowed on gg. ok good to know i guess all the time you aka @RexXxuS and @BigRed soent talking about the 100 block cv was a big waste of time right good to know. guess i can use one anytime now sweet, and this vid doesnt prove he rammed you all i see if flickering aks lag soooo?

What about the oversized CV ACP keeps flying down to Golden Globe. Same ship over and over and over. I apologize if my writing tone seems harsh but it’s a constant source of frustration. 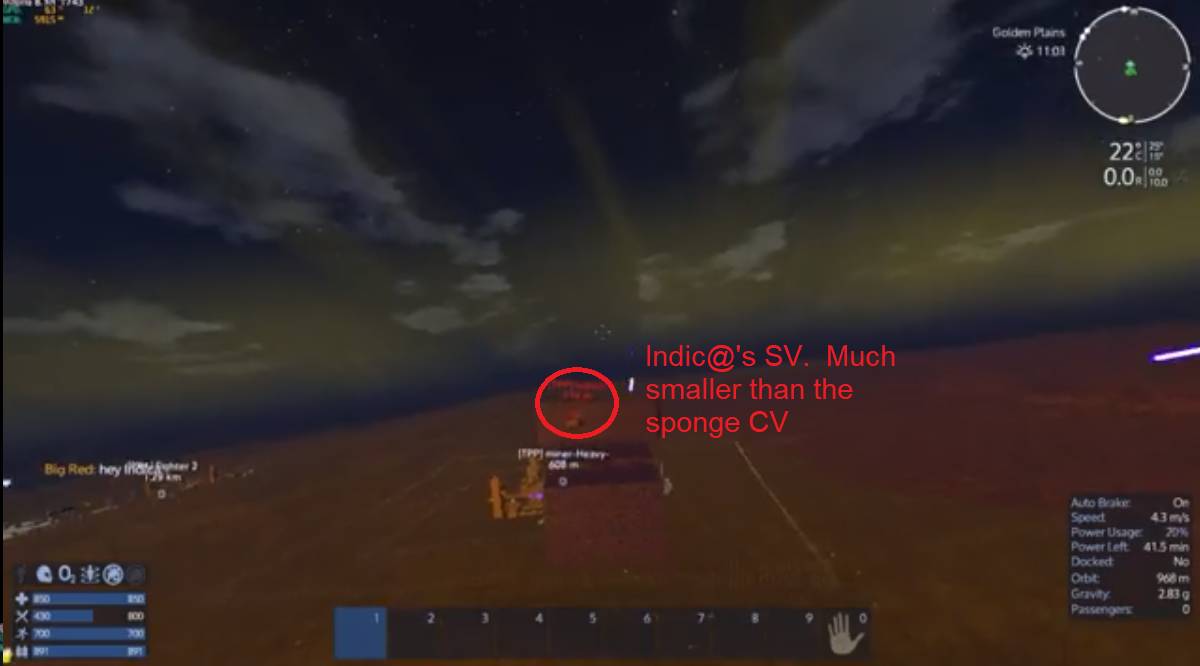 The cv “over size or not” is infact ammo draining the base, TheRaven is in a cv with no other friendly players around him so is simply not there to sponge the base “take hits to protect a sv” but to drain the ammo from the base making it defenceless against hv bombs or sv/hv attack.

If I recall it is against server rules to purposely ammo drain on this server.

That is indeed correct. Can also assume they are dropping oversized HV bombs on bases in order to ammo drain. Due to the fact no follow up battle from them occurs to the base after they drop the HV bombs. Drop and run.

He said it would be green.

And what of TheRaven!? Rex…

Ammo draining is illegal, Raven clearly had the intent of base sponging and he was not punished, do you want users to quit the server or something?

The video shows indica nose diving into the ILLEGAL AMMO DRAINING CV and was merged in for LESS THAN 10 seconds.

I dont know how busy you are but it seems to me rex that you have missed out on SOOOOO many details regarding this case.

First off it is GG. You can lose control over the thrust of your ship with the immense gravity VERY EASILY. Especially when facing NOSE DOWN… ergo the inevitable merging. But you can clearly see in the video they were both trying to separate right away. Why stop at less than 10 seconds if the ramming was intentional!!!.. People can make mistakes… and you sir have made one by punishing the wrong person. This, imho, was very biased.

If you have to discipline your players and give them harsh punishments such as you have with Indica, I would humbly request to atleast give it a little more thought before handing them down.

I did not ram the ship what you see there is Lag, but anyway now i understand something realy fishy and smelly is happening in this server. So illegal ships, Sponging, ammo draning is permited. I will be thinking about leaving this server for good now, the only thing that keeps me here so far is the friends we have .the most absurd thing i see is this voting system that he keeps people voting for this shit.

Perhaps ACP put this on the CV pad at the elemental galactic services in response to the dirt filling but once it was deemed illegal we removed our dirt. The intention on our part was not to exploit but to use an allowed game mechanic. Things like this ship in the image and video bring further proof that when some can’t build strength and take on a powerful enemy they turn to exploiting and cheating with oversized ships and pushing for constant rule and limit changes. Things like the ship on the CV pad show that some have no respect for you or those of us that adapt to the changes and still survive. 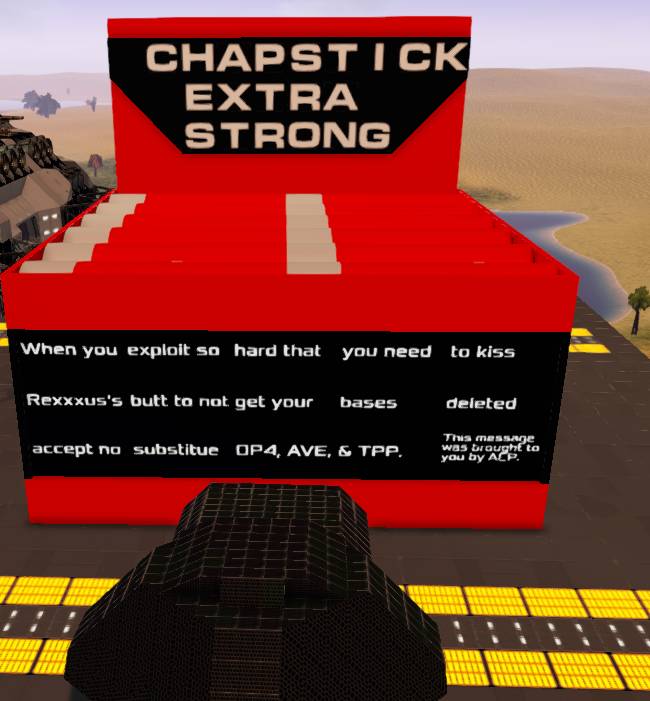 bahh… you can let this one go swff, its their own way of coping on how weak they are… the fact that our shit is still on GG and theirs is not cancel out this stupid attempt to gain their morale back for losing so many times against us… and then some… come mine some gold! 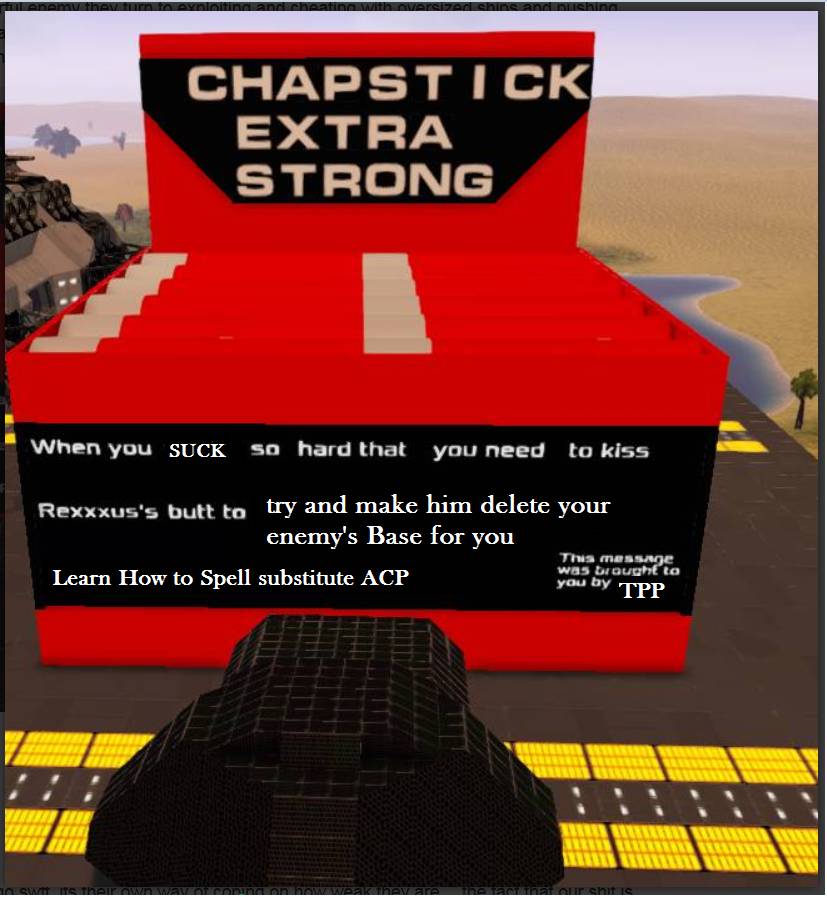 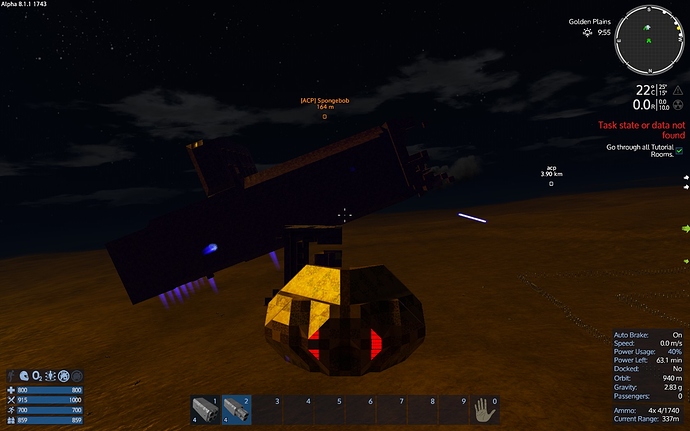 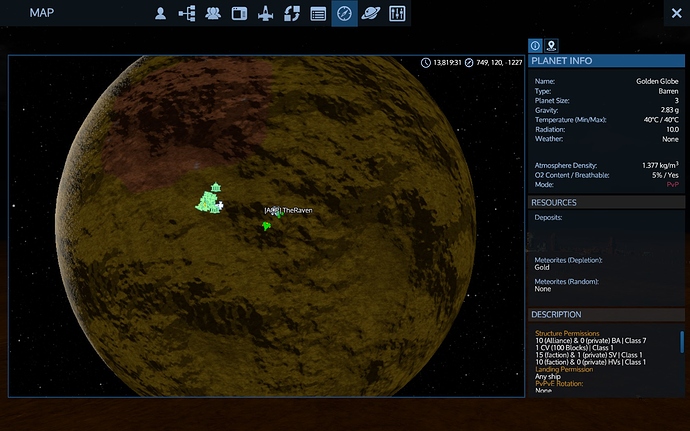 I hate to say this, but I don’t think we are going to get any more action out of this thread. Mind you, I am not kissing nobody’s ass, not RexXxus, not Raven, not our own. Here is my reasoning:

Oversized CVs, SVs and HVs are allowed on GG. Timer won’t be changed, even though they shouldn’t technically be there it’s already been said they will instead be taxed for offending the size limits. Aka no dessert for not eating your vegetables.

While technically a yes/no ammo draining event, he didn’t get killed over and over. So while an oversized CV that was technically not supposed to be in GG atmo, intentionally drawing fire from the base, its legal up to a point. Again, no dessert punishment scenario.

While Indica did have collision with Ravens CV, what has barely been mentioned is the gravity. Forward facing down with this much gravity, a second or so of not using reverse thrusters and your already going to the ground, whether or not you like it. Nobody can argue that.

So the outcome? Well, more of the same. It will continue whether we like it or not. And it’s not even about GG. We could be on HW, desert, water… just because we as an alliance are the largest threat to them, and the only ones that can technically destroy our alliance, is ourselves.

So what was the prize for this award winning VIDEO GAME battle? How much Real World money was at stake? Was someone going to die in REAL WORLD because of something here?

When are people going to stop trying to find ways to cheat to say they win? When will you people just GROW THE F UP!!!

Was it really needed to fight like 10yros over this?

Anyone feel better now that they got to say someone else cheated?

Now you people can understand just why I likely will never bother with PVP on this server. It is not Rexxus fault or anyone else that helps with HWS. It is people like those in this thread that act like this is REAL LIFE and not just a VIDEO GAME. I am too old for the schoolyard BS.

Do not like my attitude? Want to report me? Think I should be banned?

Great!!! Ask me if I really give a S because I do NOT!!! You people need to do some serious growing up!!! Someone needs to keep telling you this everytime you pull this BS. Just once I would like to see video of a PVP battle where no one is being accused of anything. Where both sides had fun and in the end shook hands before going off their own ways.

As for attacking Rexxus and that pic. HOW THE ELL DARE YOU!!! This is not your server to say what goes on. I would love to see you BANNED for that just to show people that behavior is NOT ALLOWED!!!

Oh dear… another potion of hate… day after day. I realize more and more why all others PvP servers shut down the last 2 years…

@Indica thanks for your constructive feedback.

Definition : A Bug or Exploit, for the purposes of HWS Rules, is defined as “Any mechanic, whether executed in or out of game, which creates a condition that was not an intended functionality of the game OR HWS Server features.”

The last four words are the key here.
From previous discussions I thought the SpongeBob CV got used as “bomb” in an attack, which is legit. He spent resources in repairing / sacrificing the CV and you by ammo. That is fine.
But by log crawling I see more and more a pattern.

Like @TacoIsland said, we can give tools as good as possible, players can still come up with something.
You can eat with a spoon, or you can kill people with it.
It’s so exhausting.

This ship and his owner got punished @XXSWFXX. I wasn’t aware of this blatant disrespect parking in a taxed playfield for so long.

So on topic: @Indica show me a video of your flight at that time to see how it lagged and I revert the little punishment you maybe not even noticed.

All the rest: yes, complain to me and bash me. Shit talk about me and my work or laugh about it.
But please, just leave or be silent. I’m really tired of this childish ping pong game which is going on in PvP everywhere.