The bunker returns to GG

We would like to bring back the Bunkers from Alpha 8 to Golden Globe in a way to help PvE factions get more involved in PVP.

Per Rex, bunkers were removed due to dsl rendering issues. This fixed and possibly other changes are needed before they return. Exploits and griefing led to much drama.

Well think about it; exploits, griefing, and drama are just normal parts of everyday life in empyrion pvp. Main benefits are that it would be easier to find pvp, it will be more convenient to live in pvp, and you don’t have to worry 24/7 that your base will disappear.

Think about it; would you rather have barely no pvp but still the drama, exploits, griefing that will happen anyways or a little bit more of these but much more pvp pretty much whenever you want it and without having to worry 24/7 that your base of operations will be wiped out while you sleep, or while you log off?

I don’t thnk it’s such a good idea. Originally I thought yes! It would be perfect! However, most PvP factions have plenty of money. I think two mega PvP factions may buy the bunkers on GG nowadays. This isn’t the goal. It would just eliminate the fights on GG because those factions wanted them, but now none of the factions have any reason to fight each other. This seems counter-intuitive, considering we want the most fighting on GG. I like the idea, but there would need to be some kind of certainty that I couldn’t buy one, and other pvp factions couldn’t buy one. Thanks.

Will if i remember correctly there is already a restriction imposed by @RexXxuS that its one Bunker per alliance on any playfield. So that deals with that problem. An alliance can’t buy more then one bunker on the same planet.

As Will surmissed, yes, it was primarily the rich, pvp factions who bought them.

This would need addressed to enable smaller, less experienced factions the opportunity.

To be clear, I like the idea of bunkers — just that more thought is needed into how they return, and game fixes made to avoid prior problems.

its one Bunker per alliance on any playfield.

Yes, it is, but there are three PvP mega alliances, I know I want one! What about all the other factions? I know for one hundred percent certainty I cannot outbid the two mega alliances. It is my personal opinion that this wouldn’t force PvE factions into PvP, or give PvE players the ability to even PvP. This would keep the control of GG to those who have already owned it.

That is what we want; multiple varieties of alliances for players to chose from or not. Also who said it was just going to be 3 bunkers? Maybe its 4 or 5 bunkers. Which leaves 1 or 2 bunkers open for other alliances or factions to chose from that are not in the three main alliances.

who said it was just going to be 3 bunkers? Maybe its 4 or 5 bunkers.

In season 7 there where two bunkers up for auction, I just assumed it would be two again. When you get higher than two there isn’t any point in PvP on GG. Every PvP faction will have a bunker, there may be a few small SV or HV fights, but there won’t be any base raids or base fighting, which means little to no organized fighting, and fewer players fighting. Most players would just run back to their bunkers if they got in a fight, so not only would fights be short, unorganized, and useless, none of the participants would gain anything. No fun in that, I like looting!

There was tons of looting as i remember. Factions put bases around their bunkers. Bunkers also encouraged players to put down their own bases to help protect their allies bunkers. Someone also recorded some major fights that the bunkers encouraged. I’ll put the link up shortly.

Also, Rexx could just put 4 or 5 bunkers instead of just 2. No big deal.

The problem with the bunkers is that they are indestructible. If you want healthy pvp no “side” should have a fall back point that can’t be harmed. It ruins the flow of pvp and gives a massive advantage to whoever has the bunker.

Bunkers won’t help new folks get into pvp, they won’t be able to afford them compared to the older factions.

At around this time i was in Op4. As you can see from the video bunkers encouraged players to put down bases. A bunker by itself doesn’t mean you get to control the whole planet. You’v got to control the planet with real destructible bases. Remember bunkers don’t have turrets so once your outside you don’t have any protection unless you lay down bases.

This took place in homeworld planet which had about 4 bunkers. I think TAW and their alliance had like 1 or 2. They were part of the ACP/HPG/Taw alliance maybe more vs Op4/pka/tpp/grg maybe more. We had like 2 maybe 4 bunkers, and we all used real bases with turrets to protect them and enforce our control over the planet. Without them you can’t enforce your control over a territory; you got to have real bases down.

Alpha 7.6
https://www.youtube.com/watch?v=dogaQ79lbno I was in this fight.

https://www.youtube.com/watch?v=J_6IR3AlrKg I don’t think i was in this fight.

Imagine the toxity, and the time consume for the admins.
I don’t think know how happy the admins will be from having to deal with even more toxity/chaos in PvP…

Also i like the way PvP works right now.
If you want a base on GG, you have to fight for it… Hard.
You need to keep destroying the enemies base when they build it, and place your own, and opposite.
That’s how we keep PvP running.

If you want a base on GG, you have to fight for it… Hard.

What ends up happening and i know this from experience is one faction dominates and takes over the planet for seasons upon seasons. TAW owned Golden Globe for many seasons, then our alliance eventually took them down, then we owned the planet for many seasons then we disintegrated and then tcb and abn took over, and then abn owns it now. I know how this works bud. Its a cycle like just about everything else in life. Wishful thinking won’t change that, Dark.

And the way it works right now, is just fine for some of us.
Big factions come and go, and controllers of GG do as well.
This isn’t wishful thinking. It’s the way we know work.

I didn’t ignore it. I answered it from the very beginning. Maybe you missed it.

Well think about it; exploits, griefing, and drama are just normal parts of everyday life in empyrion pvp. Main benefits are that it would be easier to find pvp, it will be more convenient to live in pvp, and you don’t have to worry 24/7 that your base will disappear.

Think about it; would you rather have barely no pvp but still the drama, exploits, griefing that will happen anyways or a little bit more of these but much more pvp pretty much whenever you want it and without having to worry 24/7 that your base of operations will be wiped out while you sleep, or while you log off?

Bunkers also encourage players to place more bases down because the resources will be stored in close proximity to where the pvp battle is; the bunker. This makes it very convenient and incentivizes the spawning not only of more bases but more ships, therefore more pvp. 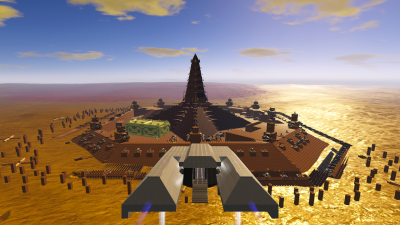 Not Sure if I uploaded this right or not . But I used to play back in 8.0 time line … The base here we used was amazing . We loved it . Having one Huge bunker base like this was a great place to come and be able to mine safely for our PVE players and the PVP players could help defend them . As far as lag goes … In my opinion it was based on your set up . I never had any issues with lag or getting Disconnected . Having a great connection , and computer helps . If the Hardware that Rex is using gets upgraded it may help with performance issues . There will be many reasons people do not want this , mainly excuses due to numbers or not being able to build such amazing builds . . Not our fault . I vote yes to this feature coming back