So first off, This is my personal feedback from what Rex has already showed us in a ‘Sneak peak’. Everything I mention is purely built on the great idea the admins have come up with for 4.0. Not looking at change just open up some ideas so the new universe can hopefully build on past lessons learnt from 3.0 and make HWS continue to always be the number 1 Empyrion server.

Enough chat look at a pretty picture then read below for a full breakdown! 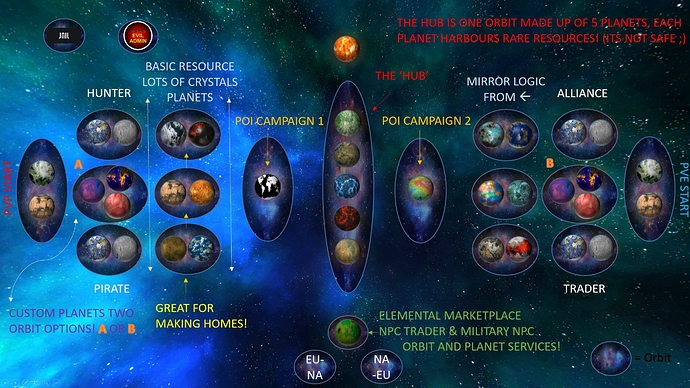 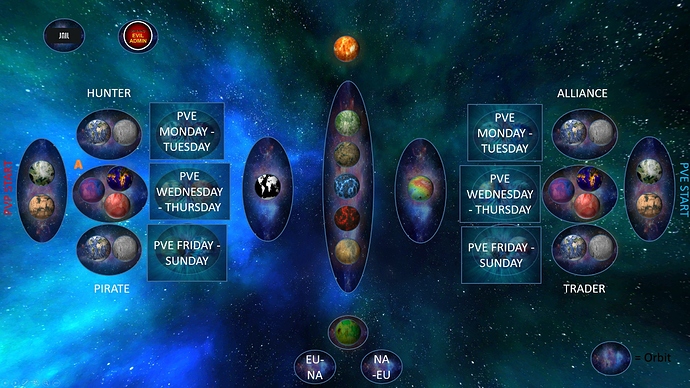 So first off you can see the shape of the universe is more or less the same as the DNA version Rex has done already just broken it down into planets not just the orbits.

It should all look familiar besides the middle section, the outer left is PVP start and the Outer right is PVE start

what we have next to the starters are the faction planets, I have shifted these around to make the core of what the universe aims to be stand out.

Now every faction planet from Pirate to Trader has the very same attributes, not visually, what I mean is they all have temperate atmosphere. So breathable air, water etc and are also, well, welcoming. Why would you pay rent to live in a lava pit right!

They all also have their own moon for crystals, however, the moons are PVP as is the orbit. What this means is that a pirate could linger around the Trader orbit if he liked and strikes when they are on the moon getting necessary crystals.

So summary basically all factions have the same level playing field to live in. Every faction planet will be called ‘Hunter planet’ ‘Pirate planet’ purely to make it easy for newbs to understand why they cannot go and build on a certain planet.

Next, In between the factions we have the custom planets orbit, one on each side of the universe. These are dedicated through the donation option.

After that we have the ‘Simple’ planets to the right of PVP start and left or PVE start.

These planets provide a valuable necessity. Basic resources and a potential place to live for all those that are lawless or don’t want to just live or live at all on the faction planets. No rare resources can be found on these planets.

In these 3 orbits (6 planets ) however, you will find an abundance of iron on one, cobalt on another and cooper on another….you get the idea, they are still vital planets because we all need those resources, they will get busy at times……especially I imagine the iron planet.

All these planets will be unique, not just the standard biome. Different colored planets, different life etc which will make you want to explore, even if you don’t need the resources.

Moving on, Next we have a very exiting feature. Built from the original idea of the HWS campaign we have the ‘POI campaign 1 and 2’ (names won’t be that basic

Learning from the bugs the HWS had in orbit the campaign only takes place on the two planets. Long story short, there will be a lot of POI that aren’t so easy to take down, and what is best is that they wipe once a week so if you miss out on all the destruction you can always have another go weeks/months into the 4.0 build.(Again custom planets that differ from the standard looking Empyrion planets)

Second to last we have the elemental marketplace orbit and planet bottom centre of universe. Here in the orbit you can find all the things you could before but now with the planet you will see some NPC shops, that of the NPC trader and NPC military and also any donated ones that people choose to have placed there. (all PVE of course)

Finally, and the real heart of what will make 4.0 the best yet, ‘The Hub’ Remember Ere fed, Neo fed, Sath fed, Zac fed…and well not forgetting golf fed??

Well now they are all found in one orbit.

You will find no minor resources here, at all. Just the relevant resource to the planet name. They are rare, so of course only harboured on one planet.

SWP fed….i mean GOLD fed ;). You will find a lot of just gold here, meteorites and ore all over, you will also find a lot of death, but without risk where is the reward

Everything else is very self-explanatory, The PVE –PVP rotation still works just for the 12 planets, 6 either side) you know where I mean.

We don’t want getting gold and other rare resources that easy do we, never…I say NEVER PVE just PVP forever

POI campaign 1 and 2 are also PVP, you want to destroy alien bases? Well so do I! Get out my way!!!

You will notice that no faction has an advantage In terms of location in the universe now, cost the same for everyone to get to the rare planets. Only thing is a little more for Hunter and Alliance to get to Elemental marketplace, but they are universe travel sluts so they don’t mind.

Thanks for reading, hope you enjoyed.

feedback would be really appreciated

If you liked please smash that like button, if I get 10 likes ill continue to waste more time making pretty things in the future…

first of all thank you very much! You answered your own question from the sneak preview post here with your own conecpt - clever

I keep my thoughts / answers here for now.

Because I know some facts about 4.0 already and worked on on the 4.0 universe it changed from the sneak preview too. Quite similar to your concept since my lacks of “hotspot”, resource spreading and workflow of the pve rotation.

What I kind of would fix in your concept is the very hard beginner curve and pve rotation (even though we activate the OP again propably). People don’t have a lot of credits at the beginning (well no big stuff either to pay for) but basically don’t have a good stable PvE ground at all at the beginning. If you watched my PvPvE rotation gif closely you see that monday / friday was covered near the starting planets.
So I will reorder your playfields since you also removed 4 nodes of my DNA module

The PvE rotation for your 12 planets would need to be symmetrical otherwise one planet is pve every 6 days almost. Dunno, have to think about that but guess have an idea in combination with the rearrangement.

Last problem is the “GF”

I still wondering why no one can defeat SWP even though so many trying it. Now if in 4.0 only one planet in the very center is the only planet with gold you really have a problem if one faction dominates it for the whole time. Can be fun, can be frustrating for small / new guys.
But there are ways for it too of course…

Thanks again for your effort and keep up the good feedback. We really trying to consider every aspect and make the best universe out there

Well with offline protection activated and bugs worked out then there shouldnt be an issue on GF. The problem on gf was when g1 was “manipulating” op to fire when offline but not be able to be destroyed. With the new version of OP that shouldn’t be an issue. Or do a 1 month wipe of gf or something

Also depends if there will be SV restrictions or not. Most newer players dont have the ~300 device SVs that g1 and others used

SWP Was removed from gold weeks ago.

Hey…
Like the new universe, the plan and that we get back the plain resources planets =) Hatet all those spiders and stuff there…

So… all looks good, just wanted to tell =)

ps: will there be like some days notice on the 4.0 upgrade? Last time it was like… Away on work one day, came back to all gone :-/ So a few days notice would be really apr =)

Keep up the great work =) Both here and at the Elon =)

Hey guys, I think this is the last pre-HWS 4.0 topic from me. Because more and more people asking I make it here very clear what will be saved and what won't be saved with the full wipe. After the full wipe HWS saves your... Orbital Cargo Drone (OCD). Everything you have in the OCD stored is save and you can get the items back after the wipe from there 250.000 credits. If you have more than 250.000 credits on your bank they will be gone. You have the option though to support us with a don…

Hey guys, as I said it is coming closer and closer and now it is on the experimental branch. No secrets anymore :wink: http://empyriononline.com/threads/alpha-experimental-4-0-build-639.7634/ What does it mean? HWS Marketplace I know some like the Eleon Marketplace but once again: we turn it off and activate our HWS Marketplace again. You can sell your stuff globally with a 10% tax but can only buy on certain HWS Marketplace Shops. Spread in every PvE playfield. This is more player driven…