as announced already for the first time HWS is not doing a full wipe together with a big Eleon Empyrion patch. 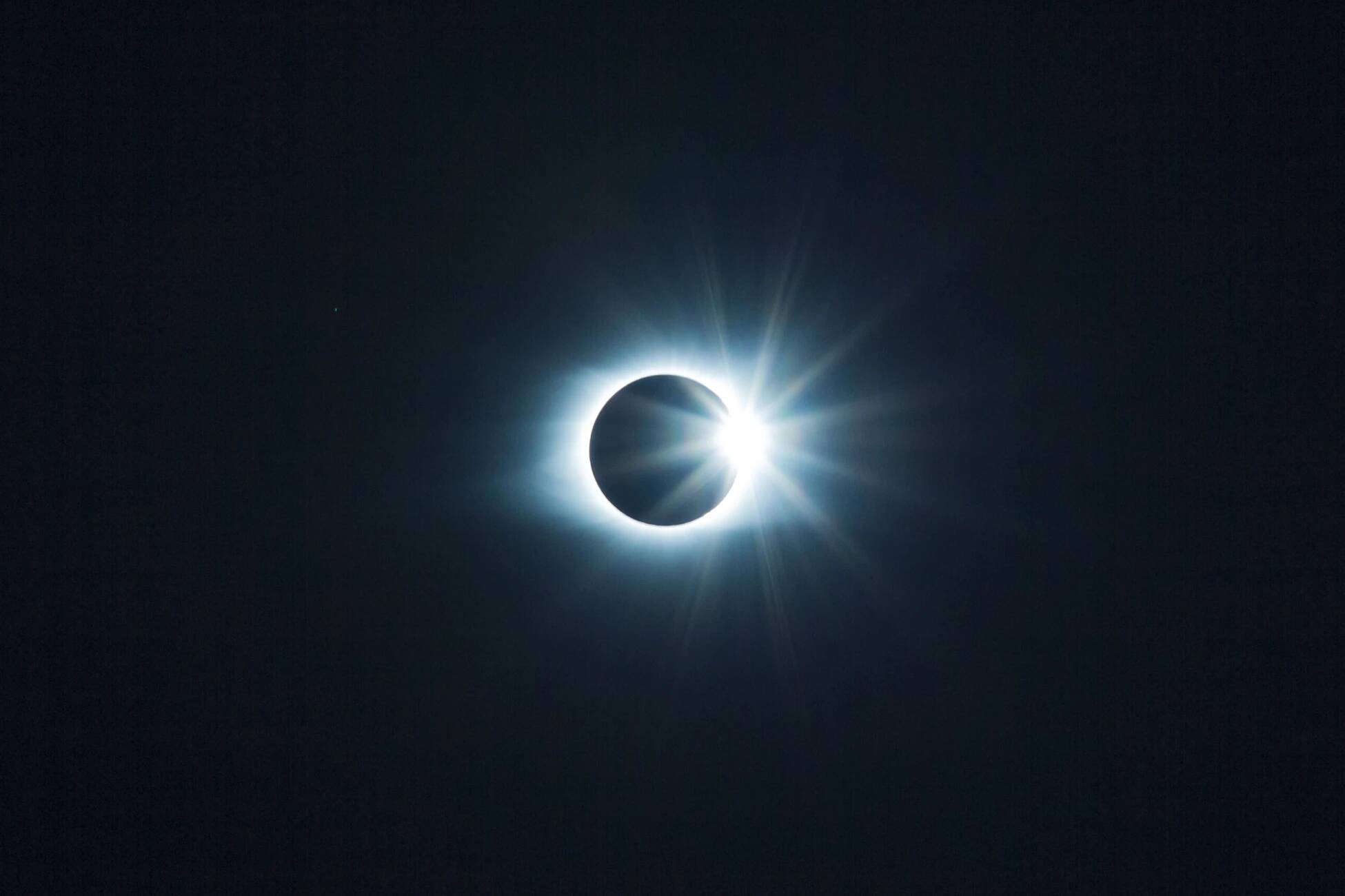 Alpha 11 is a very big patch overall. Not only because of the HUD cosmetic change or the CPU or the new Flight Controller.
Technically up to 3 playfields are now merged into one “PlayfieldServer.exe” process.
That is good and bad.

The big gameplay change is the CPU feature though. We are in an unique position where you have 3-4 weeks to carefully test it in Singleplayer and rebuild your ships for the upcoming HWS 11 season, where we will activate CPU.
However, you can already farm / craft CPU Extenders and its components on HWS 10 today!

As soon as the HWS 11 season starts (in december), the amount of items you can store in the Ultra Epic Category will be changed by factor 10.

However you will NOT lose any items in your Ultra Epic Category. It will be just as before, that if you have overlimit items, for example 50 Alien Cores, that you can’t put any further Alien Cores in your OCD. You can still get them out of your OCD, until you reached < 5.

The main reason is the upcoming story and universe change in HWS 11.
You will get so many Stargate Missions, PDA Missions, Unique Planet and Space POIs, where you get 100+ Ultra Epic items, that we don’t want want to spoil players with for example 100 Epic Rocket Launchers as storage backup.
The Ultra Epic category should feel more satisfying to find, use and store again.

Adjustments to Alpha 11 on HWS

The next 3-4 weeks we have also the option to test certain things, if they work or not.
So after some thoughts I couldn’t resist to change the way how CPU “works” a bit.
Implementing finally something many requested in one or the other way: 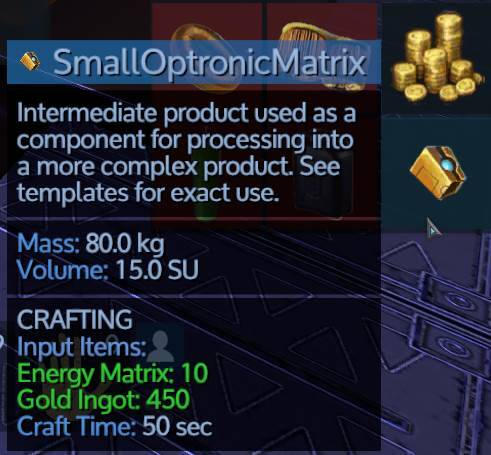 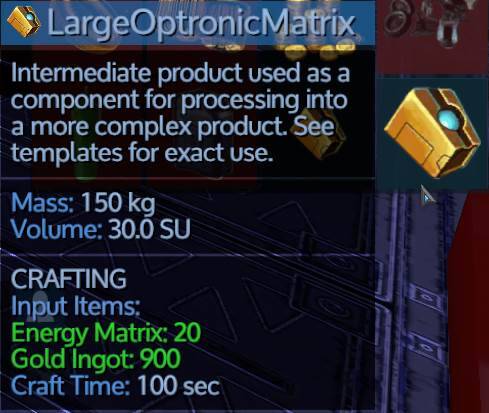 The idea is to have items craftable with Gold Ingots!

In this case I thought the Optronic Matrix components fits perfectly even visually with the gold alloy.
What this means is that you still require to find the T3 components but to craft the final T4 CPU Extender you could also make use of your own resources.

Please let me know what you think about that.

Other than that, as already announced, HWS will adapt the Thruster stats from Eleon, so no more 11k hitpoints on your Jet Thruster - watch out

Last but not least a little pre info and request to give me feedback about some things.

I’ve heard you and your feedback about Carbon Blocks. Especially watching how more and more ships in the workshop for Alpha 11 are popping up, I see that Carbon Blocks get more and more common.
The reason I consider to remove Raw Diamonds from their cost table.
The idea for HWS 11 would be those crafting templates:

What do you think about that?

I want to get your final feedback on Alien Cores - especially about the way how to get them.

Additionally, if we keep them to buy with real money and overall, what do you think about that idea

Thanks for your feedback in advance!

That’s it for now about Alpha 11 and its integration into HWS 10.
Keep in mind that I will share in depth details about HWS 11 with the HWS Patrons and that Xmas is knocking on our doors soon… hint hint

Will CPU replace current class size+block count limit? I think if both of them will be on server, it’s just too much restrictions to builds.

PS: mb small CPU extander must be crafted from Diamand?

Agree with @Politary above here.
Remove size limits, and implent cpu limits to playfields?
This will not only make more unike ships here, combined with hws own server limits, but will also make it easier for new players that has their ship already buildt from earlier.

I voted to remove ac, as this will not affect the cpu limits. Yes, it will give some factions the opportunity to build super ships, and is a bad combination with the suggested cpu limits on playfields. But, it will also mean risking ac every time someone chooses to take that ship to PvP.

Also, how will the cpu affect the garage? Cv-cpu on sv ships? Base cpu on cv? Etc etc.

Looking forward to the Christmas calender

Hmm this makes me wonder.
What about us who already have OCD levels??
Will we keep our levels and then they lose huge amount of value? Or how’s that gonna work?

Logical step for me would be to move your current lvl to the new lvl.

That would require the OCD system to be fairly identical to the current one, and then it wouldn’t make sense to make 25 levels except for getting a greater number.

Will CPU replace current class size+block count limit? I think if both of them will be on server, it’s just too much restrictions to builds.

Too early for me to imply the consequences or decisions.
That would only work if CPU is perfectly balanced and does what it claims to do: force specialization. The “grey area” is also much higher with the Efficiency (Penalty) system than the current class size .5 to .49 range.

Edit: this would also mean we remove HWS Garage completely

Interesting. Will think about it.

Also, how will the cpu affect the garage? Cv-cpu on sv ships? Base cpu on cv? Etc etc.

We have to test. Good question what will happen if we put CV CPU Extender on a SV @Ju

Hmm this makes me wonder.
What about us who already have OCD levels??
Will we keep our levels and then they lose huge amount of value? Or how’s that gonna work?

Too early for detailed questions/answers.
Adding levels is the most easiest way and would work like some years ago from OCD level 7 to OCD level 10. No migrating or whatever.

But all of the upgrade prices, storage values etc. would have to be changed - as also happened already.
Making the scaling much better from Level 1,2,3… = beginner to Level 20, 21, 22… expert.
We will see and will be announced when times comes by.
Not possible within the next 3 weeks though.

Edit: this would also mean we remove HWS Garage completely

Scary dropping a bomb like this without any extra information!

Adding levels is the most easiest way and would work like some years ago from OCD level 7 to OCD level 10. No migrating or whatever.

But all of the upgrade prices, storage values etc. would have to be changed - as also happened already.

I seriously hope this does not mean - Those who have high OCD levels like 9 or 10 will remain at that level, but the cost to achieve that level for “future generations” will be considerably lower. In last upgrade, the price for 1-7 remained exactly the same --> No problem, nobody with level 7 lost any progress or credit value of their upgrades. It just added levels. But with 15 more levels it’s likely not possible to keep levels 1-10 at the same cost as they are currently.

I urge you to talk with the end-game players & understand what a time & credit investment getting the OCD 10 has been before deciding something that significantly reduces the value of their effort.

It currently costs almost 3.5 billion credits & 20k RP to reach OCD level 10.
If we keep level 10, but in the new system upgrading from 1 to 10 costs for example 1 billion, you have essentially removed 2.5 billion value from our massive achievement, should we keep the level we currently have without scaling.

If the new total cost of 1-25 is 10 billion, so be it. But you can’t place someone who has already invested 3.5 billion, to a level that now equals 1 billion invested in the new system.
They have to be placed as close to a correct spot as possible. Be it level 10 or 15 or whatever requires the 3.5 billion credits & 20k RP investment in the new system.

Overall I find the new proposals quite reasonable. I do, however, worry about changes to the OCD. I still have not managed to achieve Level 7 which gives the distinct advantage of being able to access lt in PvP. I hope that the changes do not put my goal of OCD access in PvP even further away than it already is. Please bear in mind that not all of us are amongst the super-rich of the mega-factions who are not usually affected by the possible huge price rises. And please do not punish the rest of us because of the excesses of the super-rich.

Hmm, there a few things I’m not clear about. Are plastic blocks still going to be better than their single player standard but not require diamonds?

I think Alien cores should still be monetarised. Larger factions with bigger pockets already have an advantage (and will probably have a substantial number of cores saved anyway) and I imagine, with the increase in importance of cores, that over time payments with real money for cores would keep the server going.

I think more information on the OCD levels would be useful as they are the biggest and most important investment by players. For similar reasons to Aeonbug, most of this season is putting away money for OCD7 so I can use it in PVP areas.

Also, are the banking changes suggested by MynameisDavid going to be implemented?