Taking a long time to log in getting constantly booted anyone else.
Tried this morning still getting kicked.

You know how it works please:

What server? EU or NA? Did anything happen before / after? Set it to the proper category instead of off topic.
A bit more motivation to report stuff incase it is important enough for you to be recognized by us.
Thanks.

Here’s a problem. So since you’ve made it so you can only have one faction base on Arma, some factions (won’t name names in public), have used Alts to faction a base next to their main faction, circumventing the one base per faction rule.

A few of us are discussing it, and suggested that there should be a minimum distance between bases on Arma? Or maybe there should be a punishment for using alts to circumvent the rule? (I’m thinking you can randomly switch one of the bases to a different faction or something and cause the two bases to fight?

On NA Armageddon I’m getting kicked like every 30 seconds, I can’t even get to my SV to fly out of the playfield lol. I’m not exactly sure where the NA server is hosted (I was told around Calgary), but I’m no where near that high of ping. 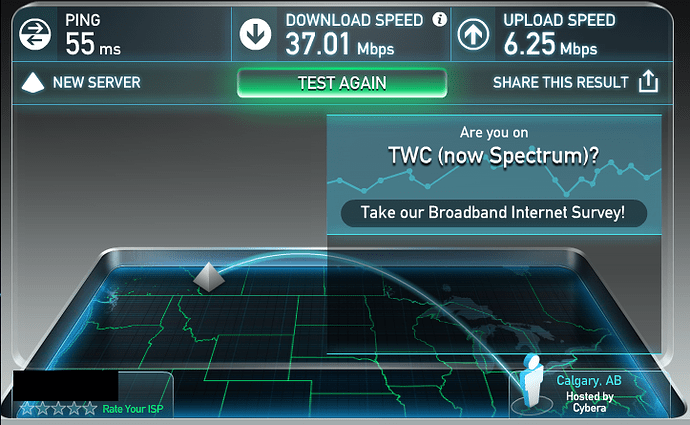 I guess a background knowledge is needed for this new popup error:

This was implemented with 5.5 and we wanted it to be ingame. This is against people having a high ping during gaming.
Because some people were so badass to download torrents while playing to create monster lag to do weird stuff then.

So as soon as someone has now a 400 ping they get this popup.

However it seems it is not 100% save yet. Will discuss it with Eleon and maybe turn off for now to see if it is really this.

Turned off the feature for now. Please report back:

Ok, a surface wipe fixed the playfield for now.

However I saw by streams etc. that people still have the lava armageddon texture. So please make sure to clear only that playfield NOT the blueprint folder in there.

That helped but still getting disconnected to playfield sometimes. Ping still below 20.

Some more that need to change.
Base classes needs to drop. Not only do they create lag they also crash the playfield this has been tested.
Large HV also create lag also tested.

If we’re going to have 10 to 15 players on planet fighting class needs to drop by a lot.

Not sure what the issue is but I get massive FPS drops whenever I’m near the BYA/PKA base. We were SV fighting and had 3 “lockups” in 5 minutes. Doesn’t happen to me anywhere else.

I was in that fight also had those framerate drops. Please remember that this is an alpha game and is not optimized yet. I remember even back in pre alpha days when the game ran much smoother there were still lag spikes like that. And it was not just BYA/PKA base we were loading and unloading both those bases, and the Alien POI over the ridge back and forth as we fought. Add that to several SVs flipping and shooting and your going to stutter some. It may not happen to you anywhere else but if you fly around some heavily based worlds it will stop you in your tracks to load in bases and that is not even during a fight.

I’m not saying it’s PKA/BYA, but it happens when near their base. This is helpful for Rex in trying to figure out what is causing the playfield to be laggy/have issues. No one’s pointing fingers saying so and so is doing something bad, but we do need to do our part to report problems/observations that can lead to a better gaming experience.

Doesn’t happen to me anywhere else.

Interesting, you are saying that THAT base causes you problems, but the one that you are pushing to downsize because we used “alts” : aka one guy’s wife’s player, and 3 pre-existing factions that dont get to live in pvp otherwise, because they are too small. Feel free to check the hours of any of them btw, and then claim that they were accounts created just to make more bases.

But on a serious note we do get about a 5 secodn stall every time we render pka’s base. Its not that big, so I dont know what is going on. Havent had that happen before on this server for bases.

it’s not anyone its everything

Its really simple… the bases have to many polycounts

It happens every time I get close to their base, and if your dog fighting in the air around their base it causes a lot of issues.

I don’t have those kind of performance issues around your base.

Even when I’m allied with them I still have lag issues. 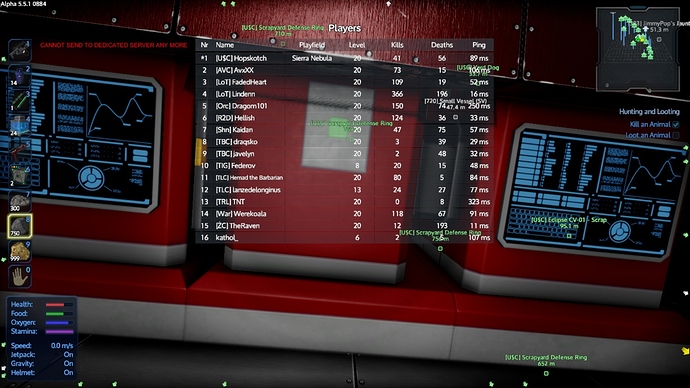 Viewing this thread it reminded me of this

Hey guys, found another reason why there are so horrible crashes: it is Gold Planet. As soon as you die on Gold Planet the whole server crashes. Don't ask me why. Hot spot or not the planet should be playable. But for now I see it causes problems for everyone - there is no other choice right now. Gold Planet wipe on sunday 9 AM (UTC+1) / 3 AM (UTC -5) on both servers! Make a blueprint of your stuff, fly away, push everything to OCD. We can't restore stuff there since everything there can b…

Its seems that the real problem is that where ever there is a mass of PVP players, the area dies…due to completely game mechanics etc

We have come up with a way in 6.0 so people can enjoy PVP in the best possible way, it wont be perfect but it should

the last thing we ever want to do is hit with random emergency wipes and like we had the other week with changes to Arma, i mean the planet is bare bones, perhaps we can think about removing every POI and other deco to try increase performance…

like i said in 6.0 we have got serveral different options for PVP players, and PVE players.

most of you know that PVP was always the direction i played the most, so going forward hopefully we can try and turn more people into how fun PVP can be, becuase when the lag/connection issues etc are not there…it is a lot off fun