Armageddon - PvP on a planet for real!

Some facts we know:

May the force be with you padawans!

Does this planet ever wipe?

NA is more pvp concerned and due statistics the prime time.
Technically because these are our restart times.

No wipes
It stays till 6.0
No Rp requirements.

Does this mean we can only spawn a class 4, but can just keep adding blocks on post-spawn basically, and it won’t get wiped due to being to big? Because I think my larger BPs were still showing up as orange on that planet.

Yes. Class 4 is a server setting. Can’t change it. But then you can build it up to class 10

I see some fun SV fights as before !

Man this is awsum

going to have so many people living there !

Haven’t had a chance to hit it yet but only hearing great things. If we base there will it stop our Freelancer 7 a day RP for living on PvP as its PVE at times or is this place exempt?

Finally had a chance to get down to check it out. So much sparkly goodies to be had haha, great work. Not w i need a PvP sv to join the fun

was there when server reset

I had such a blast for 6-8 hours on Armageddon last night, It was such a struggle at some points dealing with the hardest POI of a lifetime, we spent hours on the Main POI there… was waves of mobs!! 1 of our guys ended up having to log, Cent and I ended up staying and crafting all the ammo we need right beside the POI with survival constructors! Was such a blast… it’s been forever since we did POI’s and I think this server will really enjoy this new planet. Rex putting this in gave us so much to do, You can also farm TONS of gold … deposits 8.5k+ FULL of gold. We went with 3 max block count SV’s and didn’t have any problems when we ran into someone! Make sure you bring back up because the POI’s are intense! Watch for the waves of mobs! Bring lots of med kits and ammo hehe. Hope everyone goes and checks it out !!! 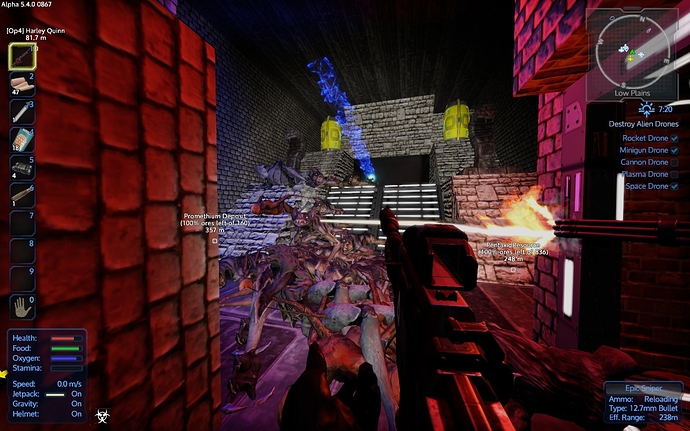