I saw some RED bases on GG, I chose to place OP4 bases on GG. (the kind where each one has a land-claim) Less than 5 minutes later, Politary had dug his way all the way from his base to ours with a mini SV and he was underneath shooting the shields. I managed to deal with him but this was odd. How did he dig under our bases in under 5 minutes? He had to spawn and ammo the ship to get there too. That’s not all though, this is also about the bases they spawned WITHIN our land claim.
=>

How can we help you now: Take a look into this, if you can prove they abused I want their bases removed, ours re-spawned, and since their ships were so destroyed at the time, their backpacks as well, or some form of punishment to stop this from occurring again.
=>

Below are pictures from the beginning to the end, showing the range of our land claim, Politary’s SV on the map, and the oddly large range of their land claim which is somehow much larger than ours? How is that possible?

Politary digging below, while are bases are right there. (I don’t have a photo of his ship or anything, but you can see his privated SV under our base in future pictures) 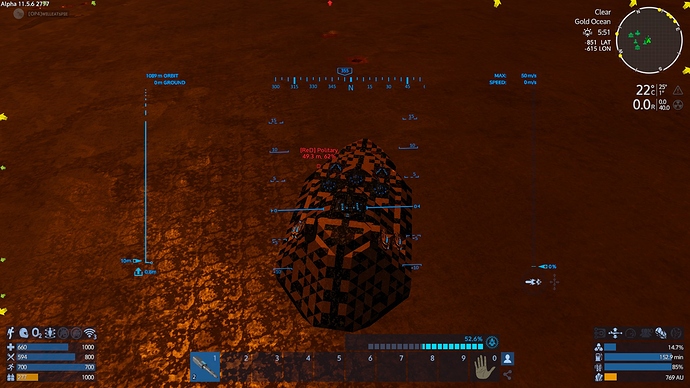 RED dropping the first base 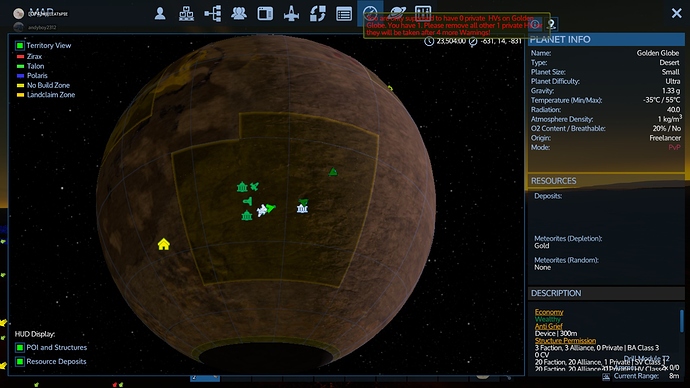 RED dropping the second base 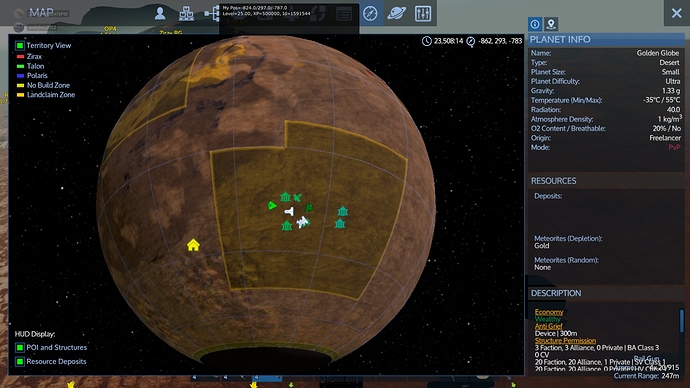 Showing the two RED who did this 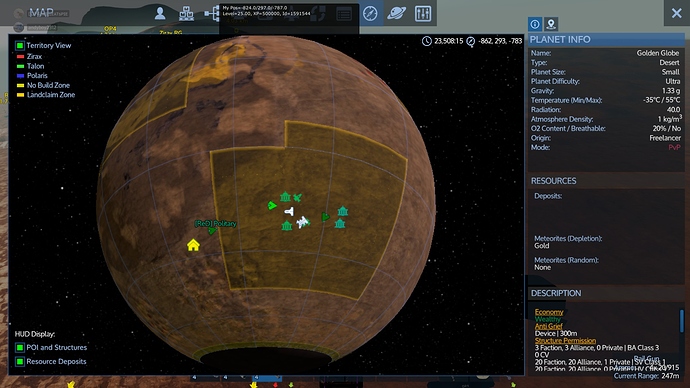 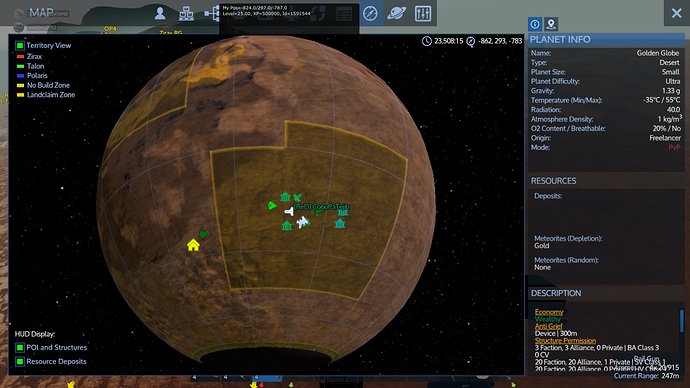 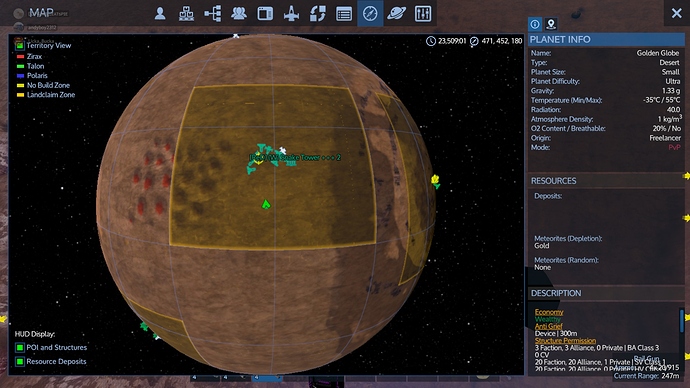 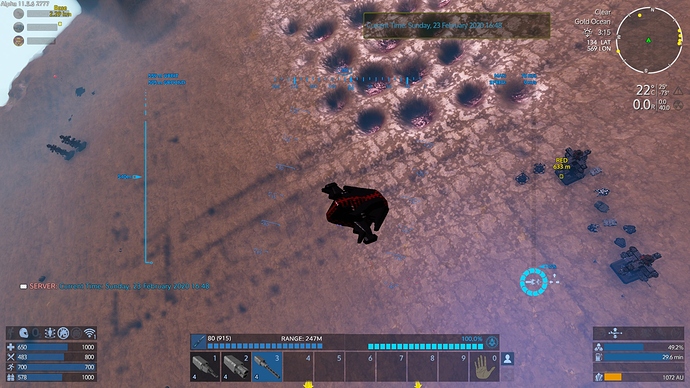 Something isn’t right here… I believe @gareth may have stopped by but I’m not sure.

You ignored my last message.
If you create next time a ticket with orange text I will reject it straight away!

======= NOTICE FOR HELP ======= What happened: =>I’ve seen TAW member digging under our base with land claim active by shooting ground with laser rifle. As far as I know, that’s illegal. I warned them that I’l make a ticket if I see it next time, but @Zackey_TNT said that it’s a common tactics on NA and it’s perfectly legal. Since there were cases of both warnings and no warnings after use of this tactics, I’d like to know the official stance for use of this tactic. Player(s) with issue: => …

Regarding Landclaim Device:
You had no functional Landclaim device yourself or at least you didn’t proof the opposite.

We did have a functional land claim on both bases, I can send you the blueprint if you want but they both had land claims, I could see it on the map before RED spawned their bases.

However, look at this. You can see there are TWO land claims in this picture, one from REDs base and one from ours. The perfect squares prove it @RexXxuS 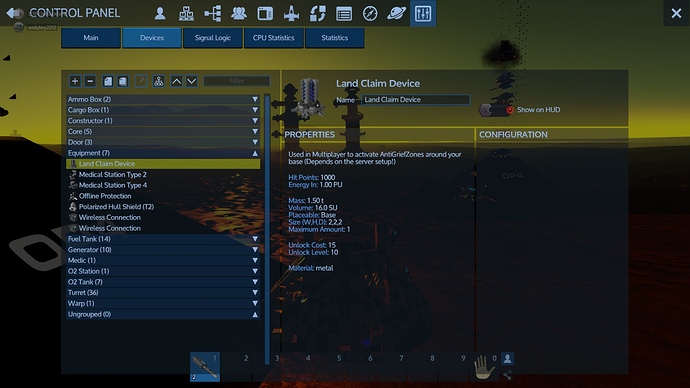 Why you don’t ask the players who spawned the base in the first place?
Can’t you player communicate first between each other before pulling the admin trigger?

They are quite active here.
@Politary @CyIvIpak, who spawned the base and how did you spawn it?

@Cylvlpak spawned the bases, he turned off his HV and used his drone while Politary was protecting him. It doesn’t matter how they spawned them though, this is clear abuse of… something.

this is clear abuse of…

I am bringing player interaction up because we had one case on PvE where I totally was not able to reproduce it and understand it.
A bug I guess, so no accusation is in place here but transparent communication so we can hunt the bug down or understand.

Land Claim Device working or not on Atlantis? Support

Huh, that is odd. Sounds like the bases may be a known bug then, it wouldn’t let me spawn HVs or SVs within their bases range. If this is a known bug, wouldn’t this fall under rule 1.1 ( 1.1 Under no circumstances will the use of any bugs or exploits for personal gain or profit, or any advantage be tolerated for any reason.) though? Either way it isn’t allowed.

They obviously knew the exploit existed if they were willing to let their ships get destroyed and risk their own deaths standing inside the land claim zone to spawn a base.

I want their bases removed, ours re-spawned

You didn’t provide any IDs. That is bad.
The name you mentioned is still alive.

So what are you requesting really?

It is an abuse if it somehow decided an outcome of something.
I only read demands from you.

Because it will heat up the situation even more I will take it away before:
A case was raised against you as well and I am fighting at two fronts here.
One obvious rule breaker (you) and some eventual rule breaker about the Landclaim Device (still open to evaluate)

So before we solved this, I ask you to remove your base breaking our rules or I have to do it. 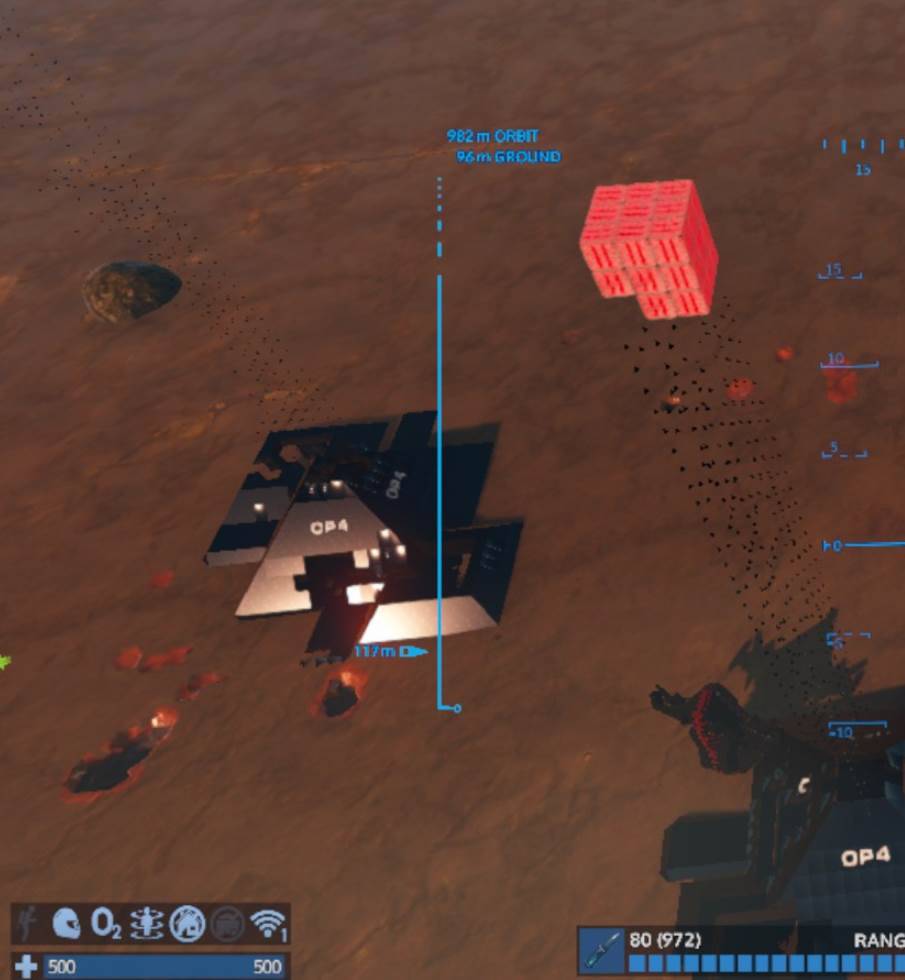 8.7 Lag Engineering.
DO NOT build structures with the intent to create lag for other players. (i.e. excessive lights, thrusters, triangles, etc.) Structures reported for possibly being created to generate lag will be examined by admins and decisions will be made & actions taken on a case-by-case basis.

I won’t post it here, but there are two designs of that base. I made a second base with much fewer triangles. Thats my design with fewer triangles than the original. It doesn’t cause lag, but it stops the structure from falling. It’s obviously not lag engineering.

I take this that I should remove the base?
I will check back in few hours again.

Did you just admit to building something in a way to intentionally bypass a game mechanic? (Structural Integrity)

Sorry for the drama, we will get this sorted. I will take a look at the bases designs and edit as needed.

I havent been part of this battle but might this be the solution for the land claim issue:
it really looks like land claim has been reworked how it works (or maybe this is the bug?) 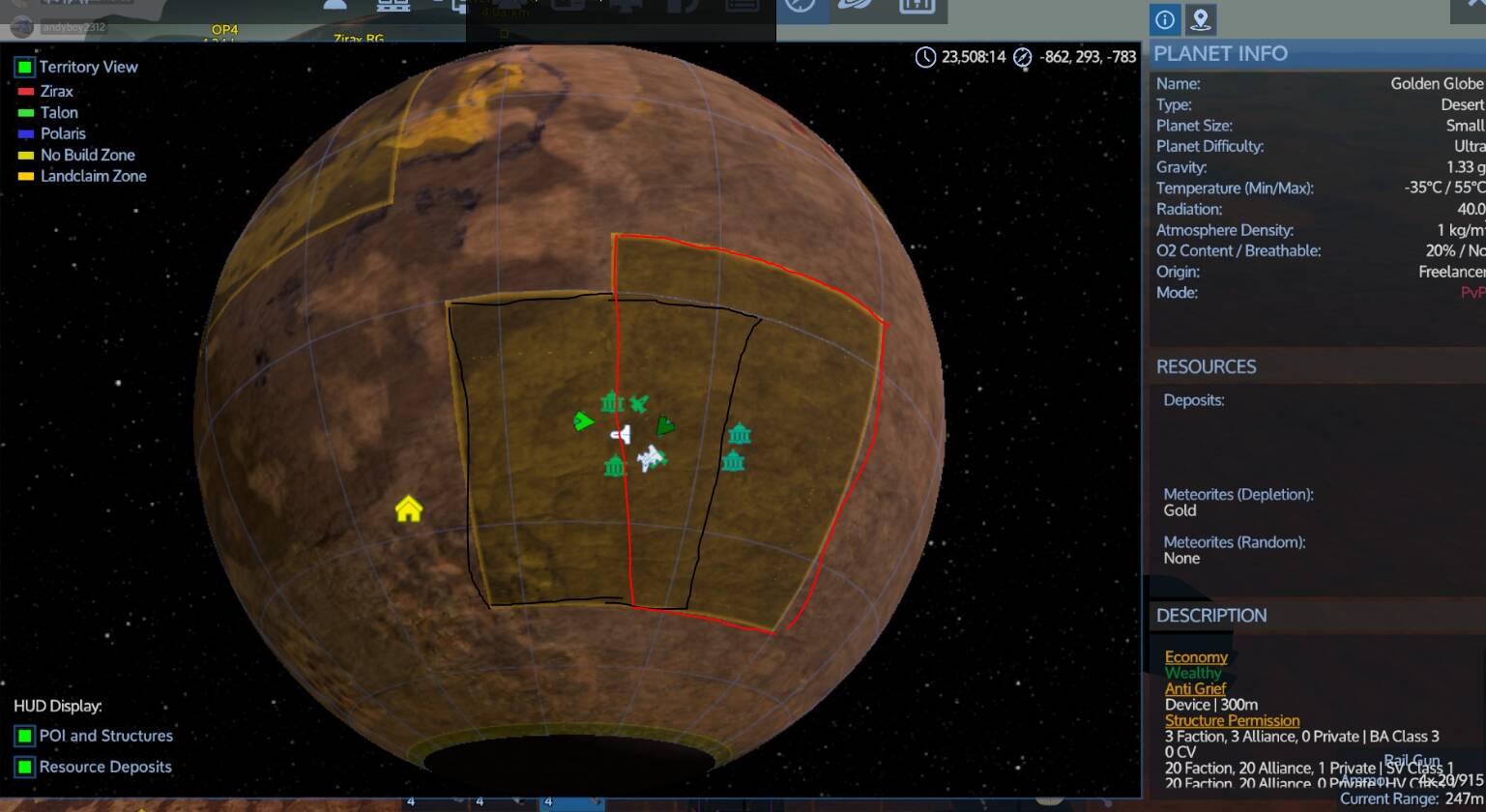 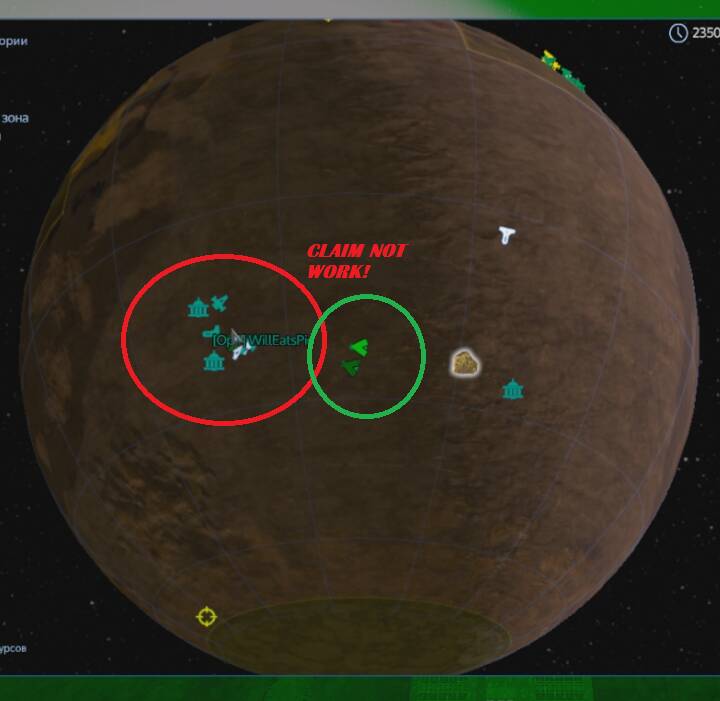 Thanks for the info, What’s your claim on the time line on that screen shot?

it really looks like land claim has been reworked how it works (or maybe this is the bug?)

exactly.
Before landclaim worked:
Landclaim zone + landclaim zone = spawn check
But as I posted before, it happened on PvE as well. Have to double verify

We are doing some tests to see if a player drops a base with a land clam close to the ground does he see the yellow box on the map and an opposing player’s map not show this.

I’ve checked the base design and I see the Land claim is one full block above the terrain but back to testing.

I noticed a few days ago that my player was not effected by the green line transition on GG. I was able to see past it when no others were. in addition the normal bit of lag you get when passing though it did not happen for me. Also during that time all land claim outlines did not show up on the map. Nor did the green line. I did not think much of it at the time and just relogged to fix the issue. I do not know what caused it nor have i tried to reproduce it. I did not think much about it at the time. Now I wonder if it could be related to the ability to bypass land claim areas. Maybe somehow the player could use this glitch to not register the land claims or green wall. Maybe look at it from the players info and not just from the structure(s) info.

thanks for the heads up “time for more testing”