Reminder! Today is the big day! There are still too big structures active!

since it will be a longer time till HWS 4.0 comes out we have to adjust the current HWS here and there. That means:

That is our first response to all critique / feedback about the last weeks. Keep in mind that changes can happen any time and we need always to see what fits or not fits in the current gameplay. Sadly the 3.3.1 patch interrupted our work a lot and we need to react.

If you have any questions let us know please.

This topic is now a banner. It will appear at the top of every page until it is dismissed by the user.

That means i have to break down over the half of my base to fit? Or applys this only to new bases?
Peacekeeper 4 - Destiny - [UST] Destiny Marketplace HQ 7192 Blocks 1154 Devices

We have invested a lot of material and even more time to get that base. We had the intention to create a faction based POI with the NPC-Trader.

U kidding me… 1st u say, that all trouble in number of Cores, and now u reduce block count

And What now?.. Destroy half of base, or kick all armor from CV?..

Sorry. Before sleep I checked and edit it. I meant 10k everywhere to reduce confusion. Blocks not what causing the lag mainly.

About devices I check tomorrow again Whizzle. More than 700 isn’t healthy for performance. But let’s see.

Love all the changes sometimes shit needs to get done.

What will happen to the ships allready over that block limit? i am not gonna strip down over 10+ ships…

not gonna strip down over 10+ ships…

Thran do you have any ships in pve ?

no but i have ships over the device limits

What will happen to the ships allready over that block limit? i am not gonna strip down over 10+ ships…

Sidenote: we are sorry to restrict the gameplay in that way but the current state of the game forces us to do this!

Btw. as I can see you only have 1 CV with 593 devices…
Anyway prepare your Multi Tool

Awesome, Such good news. Even if you do lose things imagine the devs came out and said 4.0 was being released tomorrow, you’d lose everything anyway…remember guys its ALPHA, you could lose it all at anytime

be greatfull HWS allows you to keep credits, materials, OCD etc…most servers just wipe and you are just a dude with a survival pod again.

Seasoned server goers have enough money and resources to rebuild and adapt, yea it will take time but i guarantee less time that Rex n Jush are putting into the making the server and the game as playable as possible!

Feedback from the community has been the driving force behind this, lets keep the response positive for a change…or is that to boring for you…

Hmm to be honest i dont understand it. So universe is getting bigger and ships too while ppl can have even more on PvE planets? Im still dizzy just woke up, i read it twice ill read it once more.

What is limited, restricted? I mean whats getting smaller?

My CV which i never spawned as its not finished has 43x27x61 with 184 devices (whats finished is quite protected by turrets), it will be more but hardly 2x so much and it seems like huge. 8829 blocks…There must be something im not getting here please someone explain it to me. No irony, i simply dont understand whats the change.

God if i understand this correctly i will never return to this madness even if someone will pay me for it.

Whizzle i think resort can loose a lot of devices with large windows but i dont remeber how resort looks like, just tip.
And Alex yes problem is number of cores, devices, blocks, open playfields…well to make it short Empyrion is problem.
And Thranir dont forget to expect full compensation

And just another tip guys, as CV dont have strutural integrity, and HV also dont have it you can build also from turrets. Good luck in this aylum. Sigh.

So universe is getting bigger and ships too

I recommend a strong coffee and read again

Good job. Still need one more for the other ship part

Anyway i was hoping for something like 3k for CV everywhere with 300 devices and for SVs probably the same what Zapp wants, 100, 150 devices max, 300, 400 blocks max.
To explain…i dont need to do anything to fit into this new limit, thats why i wonder where is the change Rexx, as it seems like 2nd “ships getting smaller” and its still not anywhere near my ships size…

And more than 500 devices not healthy for performance? Who the hell have more than 500 devices on ship, how? How is it possible to get? What kind of devices is that? Now you need 2 devices for generator when you are using large thrusters, few RCS and few fuell tanks. CV actually needs 5x less devices than SV. No im not getting it at all, ill try it in afternoon. The level 3 BP is 500 devices isnt it? Only think that is change is that now you cannot spawn 500 devices CV and add another 1000 after spawn or what?

That HUGE cube Thranir told about i had have 520 devices and it wasnt working and game was freezing, 280 turrets. I dont need coffe i need some schnaps probably. oh and 11k blocks…so no Thranir i realy see that not everyone is guilty.
But realy i probably missing something here, i read again and again, i eliminated all points like EM, so about 2-3 remains for me to try to understand but no, i dont see any change, any restriction.

No tried and fail, please someone explain me whats new as i simply dont understand it no matter how hard i try.

Anyway Rexx bases(pvp) are now build from more base parts lets say one base is made from 10 bases which leaves you with 7k devices in one area no matter the limit. 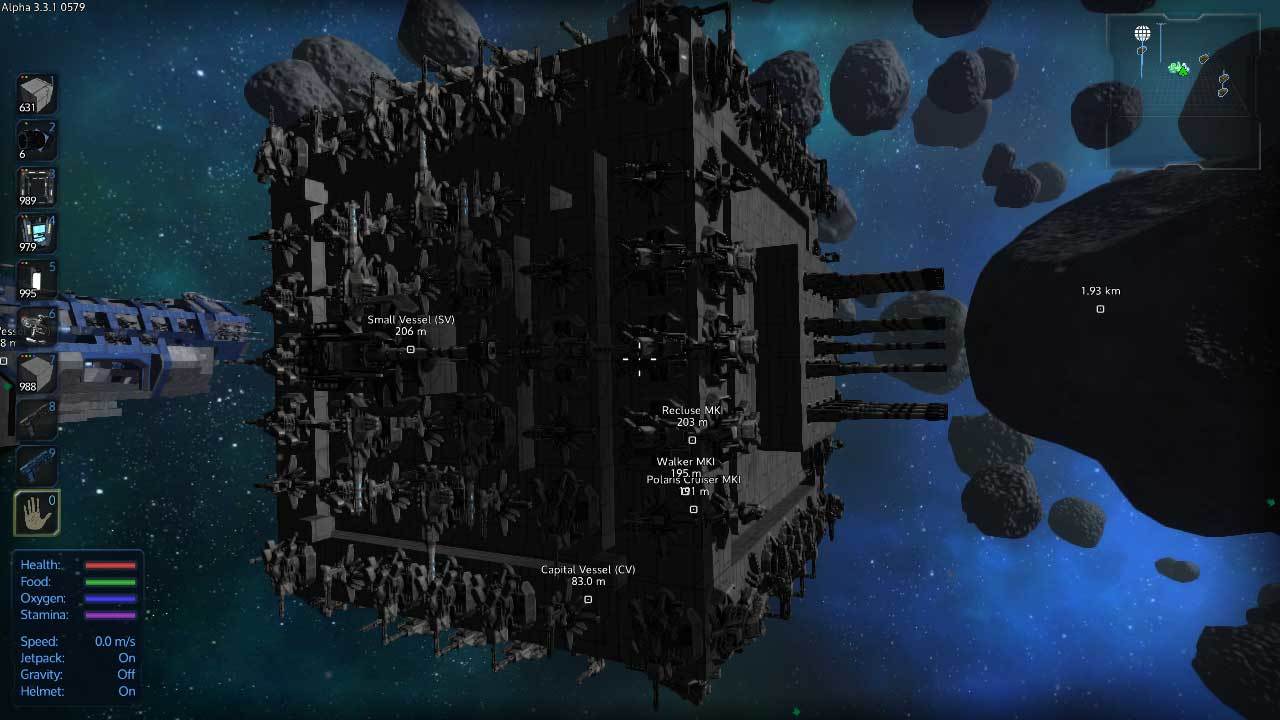 So this is last version i found, 575 devices. Its long time before T3 generator and fuel tanks. 11k blocks. So lets say ill remove few light, change 5-6 layers armor, switch generators for T3 and same with fuel tanks and im in limit?

Oh Elfias, You are usually the one writing confusing things…

At the moment you can spawn only level 3 blueprints right? that’s 500 devices but a lot of blocks, You can also add devices/blocks to that spawned blueprint without any dramas…so What was a level 3 blueprint might now technically be a level 4…follow me?

The change is in that before although restricted to level 3 blueprint you could adjust after spawn, now you simply cannot…its very black and white now. This is the limit, No ifs or buts, End of.

Ok so i understand it. Because when Rexx limited leve3 BP which is 500 devices im normal civilised person so i took the limit as limit for server, nothing like adding devices to already spawned BP. I dont need rules as if someone tells me huge creations lag we limited to 500 devices it means that i wont build something with more than 500 devices even if i could.

And because im the one who wants to play and have fun my largest CV exept this cube i build when i was new in game is currently 1800 blocks and about 180 devices. And its my only CV i hope, i dont need 10 to f up every orbit with some monster. Im living in PvP from start of 3.0 in this ship, it was never destroyed, and only reason why i would need larger is larget deck to land more SVs.

Just one little advice which come to my mind when i was reading some dramas, you realy dont need to be a friend with everyone. Everyone who dont like what you set or which rule you changed can go as i went. I see that ppl needs 10 CVs, 1 for every purpose, I see that ppl needs huge CVs and huge bases, thats not a server i want to play on so ill just wait until devs make game in which you can play with all these. Question is why i keep posting, well its because i belive that limiting size of ships can help and if that helps i could play again.

The cube you see more or less fits into current limit. I thought we are trying to get rid of these.

“so no Thranir i realy see that not everyone is guilty.” Elfias you accused me of having an mega ship that lagged the server like hell, that ship had 78 turrets… and no hv docked on it, it was just one core cv… so not sure why you said i was building stuff that would kill the server…

Any chance of an updated map showing what is going where and what the fa:supply is going to be?