Dear HWS Community,
after many months and even more efforts we are very proud to announce the release of HWS 11 - part 1!
But also this announcement is part 1 of 3, time is just missing, sorry. 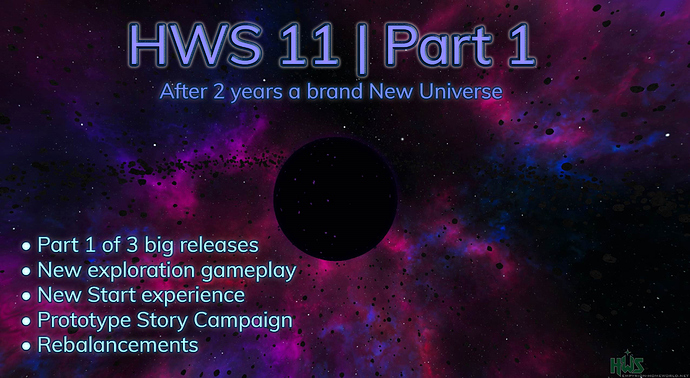 Yes, let’s come to the most important part straight away:

I tried to make more possible and prepared already a lot but time was just missing to put everything nicely in place.
So this is part 1, probably the biggest part, with a brand new universe.
Many take this for granted or misunderstand the concept of a real custom universe nowdays, with tools like SSG ruining that concept.
But this time, to be honest the first time after 4 years, Ju and I created an universe with as much details as time allowed us to do. With even a sheet where each resource is located and more. As explained in the video below, it was about time to pull it together: 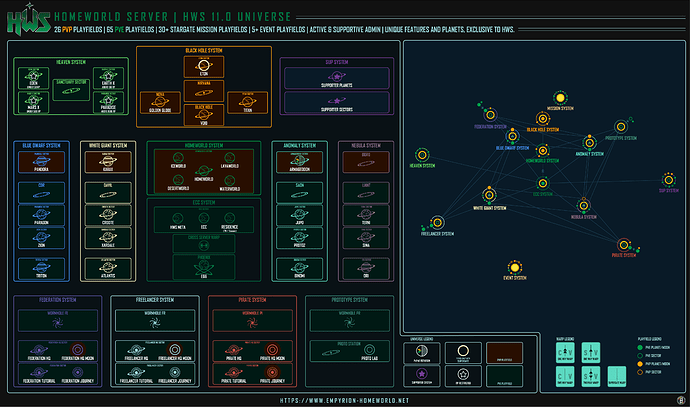 Time is missing to explain everything in details but trying to describe it short:

You should feel motivated to explore the whole universe within 3 months!

Because resources have a given logic where you will find them. There is no “everything” anymore in PvE and even in PvP you have to be creative and brave to get everything.
Promethium and Pentaxid for example have a consistent theme now. You will find them 99% of times in the Orbit / Sector.

Most planets have 2 deposit resources and some treasures. So exploration and a very curious pilot will be very successful now.

Again, I will probably explain more along the way here in the Forum and in the Guide, so let me use titles as new additions and cluster it in PvE and PvP.

No matter if supply packages, asteroids, deposits etc. we really want to go back to the roots and don’t spoil players with so much stuff anymore. At least for free with just one click or command.
The universe has so many treasures that it feel natural fun to get more and more. From our perspective there will be less and less goodies left and right out of thin air.

So the fa supply packages are still helping and different per Origin but not giving abundant of stuff like before.

Guide will be updated regarding that asap

The HWS Story will get a massive push this year. We started slowly with Prototype and you can expect each HWS season as sequel to the previous season in terms of the story. More and more character will get introduced you will trade with, will help them and fight against them. Alone or with a team. In PvE or/and PvP.

The new Prototype Campaign is an experiment and we are really looking forward how it will play out. Please keep us informed.
I would really like to get a Diary about the HWS Tutorial / Journey / Prototype start in general, like @Bob did very nicely here.

The meaning of Death

As mentioned here and there: I got permission from ravien_ff to use his Eden Project Scenario assets for HWS. It’s a lot he did and I could by far not implement everything, but some things are so cool, I hope you will enjoy it! Thank you very much ravien_ff again!

By accident his Drone theme matches perfectly our storyline of the Prototypes, the Clones and the all mighty Professor Void in this big, yet unknown story…

Forget everything you knew about HWS and Orbits. The new universe is a start in something way bigger and fun to explore and live in orbits. Just be careful of potential encounters. (especially once Eleon fixes the Freighters and Space Drones…)

It took weeks to create but thanks to @Ju we have now an even more detailed Tutorial and starter planet, where new players will probably learn more than the default game will ever teach. It’s really recommended for new players or returners.

Because of CPU, the new Flight Controller and more, I had to adjust our HWS Config.
For more info please read here:

Changelog v119 | New Season Config With the help of the community and observations, we adjust values continuously to improve the gameplay on HWS. A new season, a new Config. Because of CPU, the Flight Controller and the new Solar Systems, I had to work hard on the Config as well. Please see this as “experimental”, because I couldn’t calculate and test everything for sure. Please let me know detailed feedback once possible here #hws-general-discussion General I resigned and adapted the Epic “…

No matter how hard we tried, we are not 100% ready yet!
So please have a bit more patience, until we finalize everything along the way (Supergates, Zones, Garage ships, Reward ships, PDA updates, Guide updates…)

That being said, we thank you honestly for your patience and support throughout the very long last season!
We hope you enjoy a new HWS 11 Universe, a new season and stay tuned for more announcements and additions.

As if combat logging or twinking wasn’t a problem.

@Bob Told you people read and follow your adventure <3

Nice @RexXxuS, really looking forward to spend my next 3 months here =D Will as always be a blast

But still, AMAZING job, from you all @RexXxuS, @Ju and @Jascha

As if combat logging or twinking wasn’t a problem.

Maybe have some reward for “fighting for your faction” (Dying after being nearby an enemy for x amount of time)
To prevent exploiting you could check for movement/bases/amount of enemies/amount of alies.

Not sure I want to play this season. I’ll be broke in 1 week. How does this help any form of PVP?

So now because I am successful in HWS I have to give it all up and play as a noob. I’m at EB level 10. So now if i PVP It will cost me everything I have built up over the last 3 years.

please explain?
See resources and pois before saying that!
HWS is really pushing PVP to the limits, for eleon to follow!

imagine a death costing you upward of 6 million credits just as your about to get OCD 7.
1 unavoidable deathloop and your screwed…

I will start to combatlog.

See resources and pois before saying that!

Not seeing what you trying to tell me. So we don’t lose 1%?

I agree with politary here.

I saw your rushed feedback about the 1% Credits Loss on death.
I see you are totally against any immersion or reasoning.
It was a try to put it into Part 1 of HWS 11 but probably needs more fine tuning.
We turned it off for now. You won’t lose credits on death. 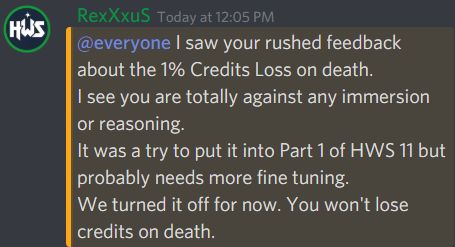 Basic math. If I’m at EB level 10 with 1% daily Interest that means each death cost me 5,000,000 credits. That’s to high of a risk for me to do anything PVP. Unless I start abusing the Alts to avoid my main Players death. This is something I don’t want to do.

If you are getting 5% daily interest, then to lose 1% is not as big of a hit. Make it fair for all.

Maybe scale it based on EB level.

Not totally against any immersion or reasoning.
I normally don’t say much. But sorry I felt I had to speak up on this issue.

Basic math. If I’m at EB level 10 with 1% daily Interest that means each death cost me 5,000,000 credits. That’s to high of a risk for me to do anything PVP. Unless I start abusing the Alts to avoid my main Players death. This is something I don’t want to do.

Actually your math is off.
You can maximum earn 5mil? with EB 10, and by gaining 1%.
Death doesn’t have a “roof” (Maybe make one

Edit:
I’d find it interesting if the death was a bit like EB.
So higher EB = Less loss.
But the once with lower EB most likely won’t have as much money, so they will in the end not have this as a huge disadvantage.
I do suggest you lower it a bit from 1% though.

Once again, you get punished for your dedication and progression made on HWS. This kind of penalty discourages veteran players from in vesting more time and effort on HWS.

I think we are focusing on the negatives a little too much. It is understandable since most still have a sour taste from the release of CPU.

Please try to remember that the team is putting in a lot of time and effort to make the game more fun and provide content for all to enjoy. I’m looking forward to seeing what trouble I can find my way out of this season. Was originally thinking of doing a log of my adventures as a freelancer this season but now wanting to see what prototype is all about

Please try to remember that the team is putting in a lot of time and effort to make the game more fun and provide content for all to enjoy.

I understand and support what is done over all. But how is it making it more fun for me and providing more content for me if I can’t enjoy playing due to being worried about losing everything I have worked for in one PVP battle or a death loop situation?

You won’t know for sure until you try. Think of this way, you will loose everything anyway if you quit. Give it a chance and offer feedback on what you discover. You may be surprised at what you find

For those of us that tend to explore and try silly things that end costing us a lot of deaths, thank you for reverting this change.

Death already has a pretty hefty cost, from losing ships, BPs, ammo and other resources along with RP and a massive hit to armor. If this change does go live it will change how I play the game, and not necessarily for the better.

Sorry for quite few pings @everyone . A new release has always more action going on

So Alpha 11.5.4 is being out with very important fixes and additions!
Let me highlight:

I got honored with Zirax and just do a sabotage in Missile and Artillery base each time, lol! Wait, so you just walk in there, go into the missile...

Second, the new univervse mechanic BLOWS… ECC isn’t a central jump from HQ planets now? you have to have a CV and more jumps just to get to ECC?

Didn’t play alot of season 10 cause I LOATHE w/v… cpu con’t mind so much but HATE w/v.

Base attacks not happening on HQ planets? why?