as you see Alpha 4.4 just came out and we hope you have a lot of fun with the new features Eleon provides to you.

For HWS this means also quite a change till the next big 5.0 session goes live (and a full wipe of course).

Hey guys, ok, the NA guys are the first one who will get it but here we go… the surprise is… Next level HWS experience Everything is now integrated into the server / tool! You don’t have to logout anymore… you do ocd:get:all and see how your items magically coming into your inventory… if you fly to a restricted planet now you get ingame warnings. No chat, no. The same warnings like a Drone attacking coming. So you CAN’T miss that for sure :smiley: We have also almost full control over struct…

We don’t want to say: let’s hold on till 5.0 and ignore your problems. We don’t know when 5.0 comes out so we need to respond to current 4.0 issues.

Since the server is overall more stable than ever before our main goal is now to provide you the best smooth and playable gamefun.
This does not mean you can minecraft and build a lot of shiny lagging stuff, this means sadly - due current performance issues in this alpha game - limitations must be back again.

With all these changes you maybe are crying about your heavy use of your multi tool and “lost creativity” but with overall more fun in PvP and less bugs it is fully worth it.
And by the way trying to build something beautiful with limitations is 100 times more challenging for your creativity than just building big stuff…

Thanks and have fun!

With all these changes you maybe are crying about your heavy use of your multi tool and “lost creativity” but with overall more fun in PvP and less bugs it is fully worth it.

U think less blocks more important, than stability of server connection? All my ships, 2-3 Class, btw.

While we didnt see hitbox fix, about what challenge u speak?))))) We got dmg through 10-20 layers of armor, and not only we. 0 dmg for armor, and tons of dmg inside ship. Little ships = wins by number of your ships. I think thats not good idea.

Only because you play small it does not mean your friends or other people thousands of meter away don’t have a death destroyer parking. This influence you of course too

Only because you play small it does not mean your friends or other people thousands of meter away don’t have a death destroyer parking. This influence you of course too

If I catch disconnect in solo fight vs 3 ships (not big ships) - thats means something?

Ofc we had some big ships, but they didnt take part in fights. Only one, sometimes goes in fight, but I wouldnt say, that he is so large + device count didnt come to limits. How it could influence me, if I even didnt need to upload it in my client?

Again this is not how empyrion works!
You can have crashes and laggs even if you eat popcorn sitting on a toilet because OTHER anywhere can have BIG stuff

Again this is not how empyrion works!
You can have crashes and laggs even if you eat popcorn sitting on a star because OTHER anywhere can have BIG stuff

heh… Than we need closed for building planets and size class 1-2, for better gameplay?)

Thumbs up Rexxx for limits! Sweet as

Alex I see what do you mean. If you will be forced to build smaller ships you are affraid that as strange things are happening in combat you will survive much less. Thats maybe true, but i think there are 2 different categories.

So as always its more for devs, you can go to official forum and report that, which is probably not so much necessary as i belive thats what R&J are doing all the time.
You can already notice pattern in Eleons doing, PvPers got their crumb, some balance, some optimisation now its time to satisfy builders as they need to keep giving something to all parts of Empy comunity.

We will have to wait until our turn will come again, which sucks and i think that there should be more devs so everything would go faster. It sucks for sure. This is patience training program

Everyone will have to keep playing a bit bugged, bit broked, unfinished game until it will be finished game.

So yes thumbs up for limits again Rexx, lets all hope it will help at least a bit.

Btw how i think its working and i would like to see what someone with less vague knowladge than mine is thinks about that.
Eleon did what they calls seamless transfer. So if you leave one playfield you are imediatly in new playfield. Thats superfast. But you are in empty playfield and are are being fed by playfield content (all the structures) so it not about Alex only, its about everyone with their structures on that playfield. And i doubt that game knows oh there is Alex fighting with someone lets send him data first. So you are on playfield, you get information that ship is there you see the marker for its position and then slowly information about what ship is there is arriving thus for some time you see invisible structure as your client dont know whats there exactly yet. Less data are needed to deliver to you the better. It should take less time until you will see whats on that playfield if less and smaller structures are used.
Can be wrong here, im not a coder.
If you will search in large database it will take more time than search in small database.

Very good news! the block limit is thumbs up, tired of seeing swp laggy ships going invisible all the time while fighting…

Is it related to the new modding API?

Haha yes spoil Rexx, spoil, dont be like Mr. J. You always spoiled at least a bit, and as you are talking about this for weeks it must be huge

and i feel how eager you are to spoil

@RexXxuS if you don’t tell us or give a hint at this HUGE thing then I just not play I will throw my toys out of my pram and comment on everything. I am already in limbo as building a new CV and need to know if this big thing will effect it. Go one @RexXxuS give us a clue I know you want to

Ooh I like surprises lol, just bloody typical I’m at work now and need to wait till I get home before feasting my eyes on the new stuff empyrion has to offer, more block shapes is a more than welcome addition had trouble tying corners together when using angled blocks, as for the block limits and device limits I welcome them as I’ve never built a ship yet that exceeds them or cones close to the limit and anything that reduces lag and lag spikes is more than welcome in my books.

Nr.1: If you are the top ranking relogger in this game due to HWS…Sad news

Nr.2: If you hate wired things happening in your backpack while your walking… well you will freak out soon.
Nr.x: … lets keep those for another day

Yes that’s more than enough for CV’s. They rarely have that many devices anyway because it’s mostly just armor blocks. But I would really hate class 3 when building a pretty minecraft house on a PVE planet

We will reduce your overall global spawn amount of bases in every playfield in the coming days. This should prevent a planet full build with one faction

Yes! That will get rid of that “circumvent the turret limit ‘exploit’”.
But please not for PVE/donator planets. Everybody should be able to have their own home and landing pad which can still mean 20 BA’s for 1 faction of 10 players.

Not 100% sure yet, but bringing back the block limits again. If you warp and you see invisible structures then I think it is also because of too many blocks which needs to render (with the +30 new blocks for sure)

Having lots of blocks is the only counter to certain exploits… I mean… ‘enhanced tactics’.
Also less blocks is a must in case you disconnect like Alex mentioned. The class 3 is ok, but we need tons of blocks to deal with all the problems. Also I sent you a PM a while ago mentioning some more questions regarding these tactics.

The devs need to optimize rendering of structures and make even more use of the RAM for pre-loading. Right now it only uses like 8GB RAM. They also need to find an optimal way to turn on CV collision again so that we can build smaller ships and prevent projectiles from piercing armor layers. With a 10k block limit (basically ~3 spaced armor layers max) it only takes 1 tiny bug and you blow up. Sure you can add tons of space between but then we get the other collision problem again… And the other tactics or disconnects… We need tortuga’s (big tank) ships to counter all this crap.

Oohhh… We get ingame pets? 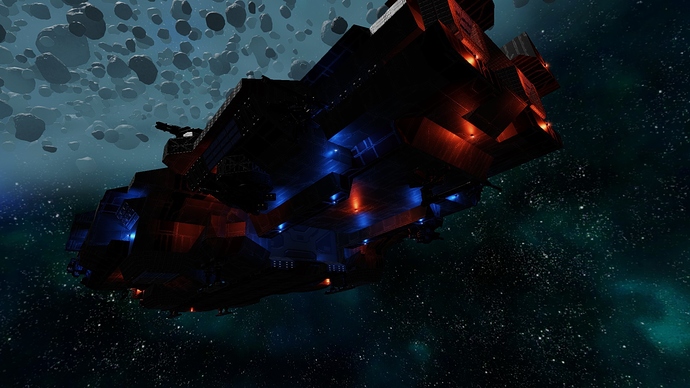 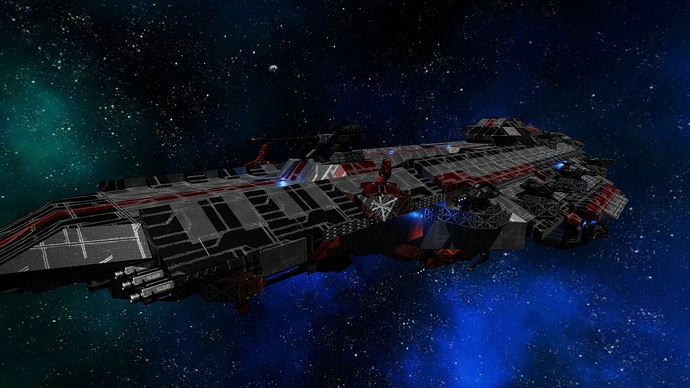 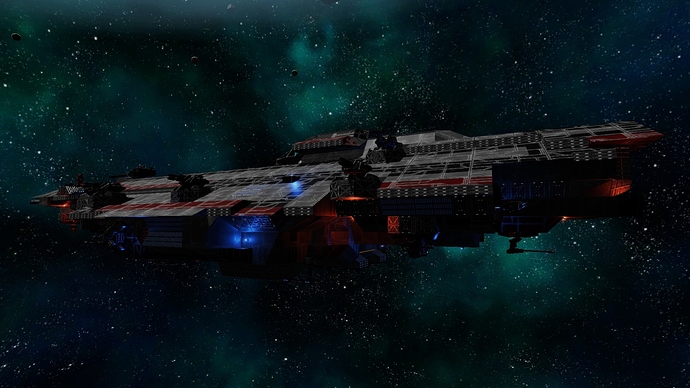 5 layers = 1 lagshot and I still blow up your devices behind it.
5 layers = maybe not enough to protect vs disconnect.
Good luck spreading out your components in the ship with separate armor in that tiny boat.
Your turret placement is terrible.
Your guns are unprotected and cluttered together which makes them very vulnerable.
Diagonal armor only has half the hitpoints.
I hope for you that your cockpit is only for show and that the real one is hidden inside. Because otherwise it’s 1-2 shots and you are dead.
No shields or visibly spaced armor. You are vulnerable to certain exploits and again to lag-shots.
No floating turrets.
Etc.

But you get kudos for beauty. The only way to make 10k block ships work is to push the rules to the limit and beyond.

wtf does all that mean lol

Your guns are unprotected and cluttered together which makes them very vulnerable.

This is a huge issue. Your guns should not be at the very front of the ship nor should they be clustered together.

The above ship will lose most of it’s direct fire guns if it’s attacking something as turrets will smack it right in the face and 2 arty shots will remove the entire gun cluster.

Also turrets place on the sides of ships that are not able to fire forward well are useless.

This isn’t naval broadside combat. You will almost always face your opponents head on. You need to be able to have as many of your guns firing forwards as possible. This means either placing them on mounts of building a < shaped front for your turrets - or go full cheesy lameness and build a > of floating turrets in front of your ship (sorry RAT I’m giving away your secret designs)

Rexx you should stay away from evil J., he has bad influence, corrupting your spoiling abilities!