to vacation from tomorrow until Sunday I want to give you an update / teaser about HWS!
(for all requests etc. please contact @Jascha)

A very very old and long requested wish from the Community finally come true with the big help of @Schleicher! Thank you so much!
He has set not only all Doors to public so you can enter the Garage ships and check them out but also provided Statistic Screenshots for all ships!

The next bigger HWS Garage update will be implementing the “Contract” versions again for new player to enjoy for less credits. Stay tuned for that!

The HWS Showroom is available after the 5PM restart today! 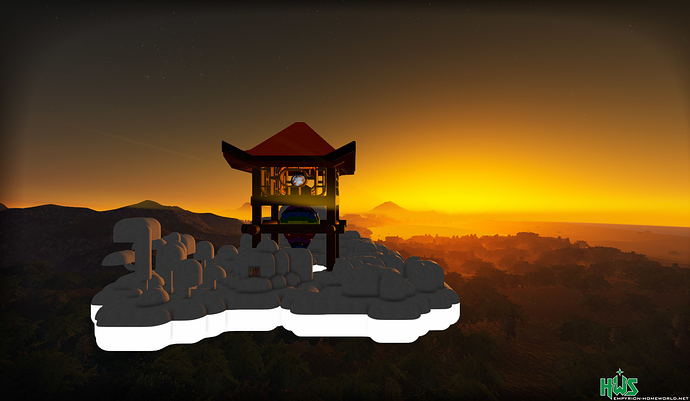 The new Penthouse (Japanese Residence) you see below is available in 2 versions so to speak.
One version is available as a Penthouse but another is one of the biggest and hardest HWS Mission you can soon play! It will be available in the EGS Flying City via the Stargate. 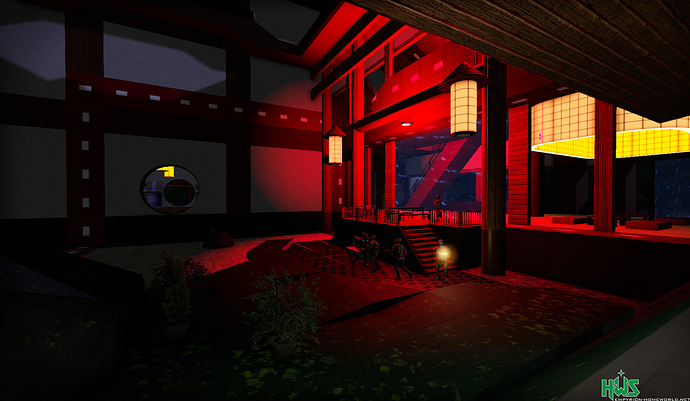 Your goal as a Ninja will be to NOT cause any alerts to the Guards, steal a hot air balloon and fly with that up in a cloud to find a hidden treasure there. 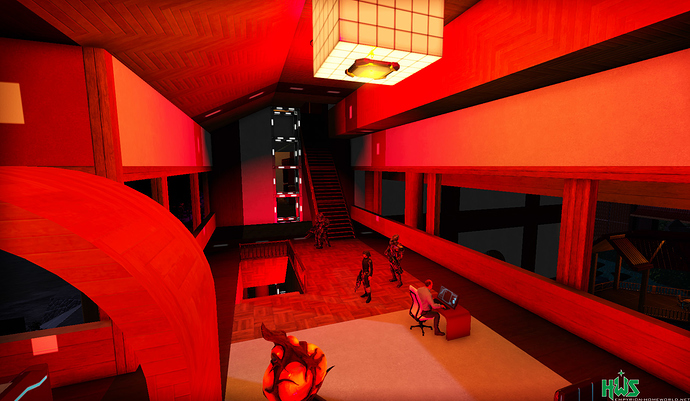 The difficulty depends if you follow the true path of a Ninja and claim then a reward for Emperors. 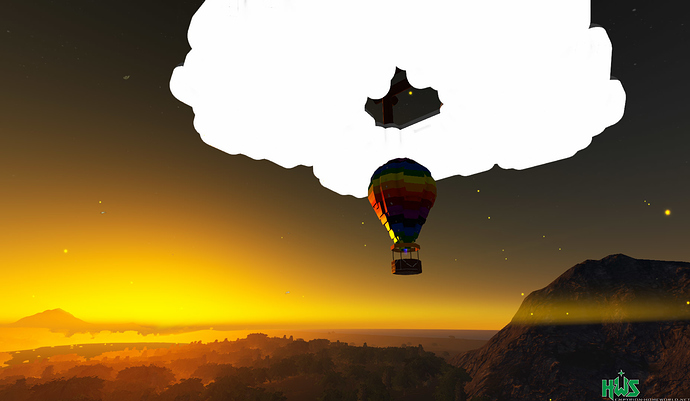 With the great help and Skill of @Jascha we improved the Tax system further more to close one missing gap: fairness.

It (could) happened that after someone built a Base since Day 1 on Eden and after 200+ Cores got reached this poor guy got Taxed because others didn’t care about the warnings. So either he moved away with sadness or got taxed not really fair.

That is the reason why we enhanced the system to ONLY tax those players who caused the 200+ Core breach.

Everyone who was on the planet already before the 200+ limit break through don’t get taxed.
This should prevent unfair play - intentionally or unintentionally ( which can always prevented by checking the Core count with fa:scan + HWS Connect) 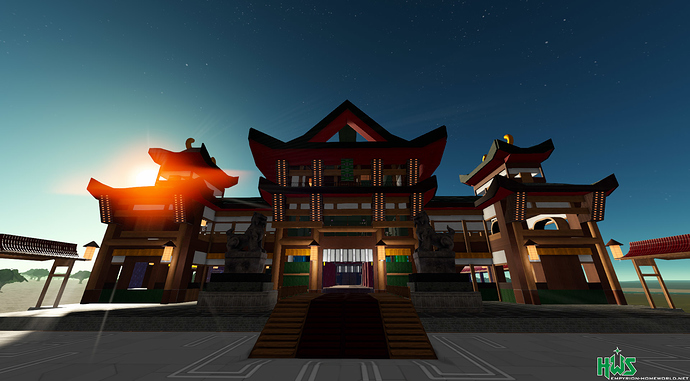 Same as the Ninja Mission, @Ju built this outstanding Japanese Residence for HWS. It will be available as Penthouse to rent similar to the other two Penthouse versions you can check in the coming HWS Showroom. 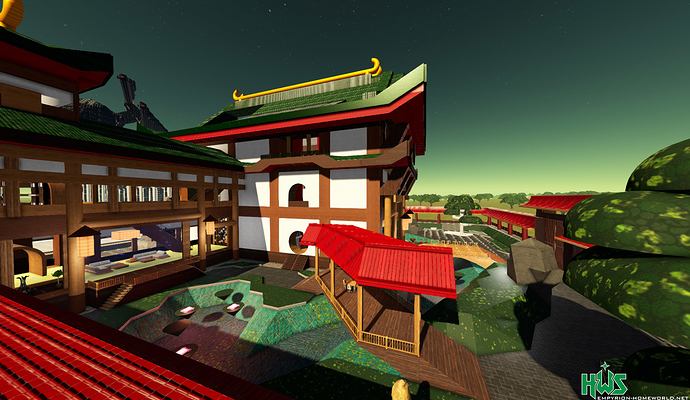 However, because I know some player complained or worse about the pay wall for Penthouses we will implement some Penthouses on some no-tax planets as option to buy with ingame credits.
By no means do Penthouses give you any advantage over others, no matter what the haters and liars telling you. But I agree that such awesome buildings should be available for everyone who appreciate the work we do for you - with a donation or ingame credits!

A more in depth change to some Donation options will come as soon as we start the Patreon idea.

I know very well that HWS has here and there the image of a “Pay to Win” server. Especially because other Server owners spreading this lie over and over again to their playerbase.
They ignoring the facts and feeling better by doing so. So be it.

But because especially you should feel comfortable on HWS we will implement couple of ways how your ingame progress can give you also the Donation options to unlock.
For example unlocking 1 Faction Planet with ingame credits + RP instead of donating.
That will be the last step to crush any Pay to Win hater out there - just in case they care about it, what I doubt.

Anyways, more about Donations, Patreon and the financial aspect of HWS will be coming later.

For now I hope you will enjoy the HWS Showroom, got teasered and don’t kill @Jascha too much with requests while I’m away

P.S.: To calm down the burning torches I got already about “stop adding shit and fix lag and PvE places”, I can only say that we work hard with Eleon together for a solution regarding lag / disconnects and regarding PvE places: there is a lot of room left still and maybe you start spreading out equally already by start using fa:scan

Great to see the tax fairness

i guess this is for all +200 core planets? I touched down on sanctuary last week and hope to stay there for the remainder of the season

safely with no taxes. I do have a question from a building beauty point of view. Can you think about allowing bases on pve worlds larger then the lvl 7? there is no reason from pvp point o keep them on a size but it makes it so much interesting in a creative way to be able to go all out. Please consider this for a building lover

The Mjolnir statistics screenshot has its flight switch off and so has 0’s for it’s acceleration values.

What if we image some noob starts out, and get off cryo. Then he wanna settle at some planet, but they’re all taxed. And no one will leave the planets because they can stay there forever taxless?

What!? are you allowed to go on vacations? Make it quick bro!!

Great changes. My two cents, how about less days for wiping structures at taxes playfields? 15 days is too comfortable to people “save” their spot there. I would lower this to 7 days., only on taxes playfields. As I said, just my two cents, I’m already on the spot I like.

If you do the math for the number of PVE planet with 200 core each it is unlikely this will happen. There are over 30 PVE planets but no one wishes to move they want the first available. So lets see some of this math ok. We have about 30 PVE playfield (Yes too lazy to look it up know it is over 30) 200 cores for each playfield. That is 6,000 cores total for PVE. Just my opinion but that is more than enough to support the server. So again spread out use the tools given and you issue will never happen. There is plenty of room for all. Just means you do not always get just what you want. Well life is full of not getting your way.

Enjoy that vacation and leave that phone at home!!! I am sure your partners at HWS can hold down the fort while you take some time for you. You do great work with HWS you and Jascha. There are always going to be haters and server owners that are just JEALOUS!! Too bad for them. HWS is not P2W and it does not matter what some want to say. With the work that HWS has done for the ENTIRE Empyrion COMMUNITY HWS needs and deserves the financial support they get. I do not see any other people stepping up with tool like the Admin Tools HWS has provided and continues to update. So many do not know that the CB commands on other servers are in fact HWS’s work.

Well, im just talking about planets(For water and stuff) and for a newbie. Sure there are lots of PvE playfields. But there are only around 3 available for people who just escaped cryo(Sanctuary, Eden, origin planet). Then the issue i said in my other post is back

to vacation from tomorrow until Sunday

@RexXxuS enjoy your vacation. Unwind. Let go of all that stress we cause you, lol.

Ahhh, nice! So it is possible to kill @Jascha !
With requests!
Elfias roars with diabolical laughter…

Ever tried killing a bit?

Sorry if some flames burned a bit high

ah this tax rewrite is great!
there were like 2 other bases on sanctuary when i set up there, then i got hit with taxes, and i was forced to move

@RexXxuS did you get the new garage ships in?

There are a lot more than 3 planets to get your water from. Starting with ECC and the many other PVE planets. Even a PVE planet that is public in the donor section. The opportunity is there but some people choose to be lazy and demand things be brought to them. I get the sense that HWS is not going to be that server. There are many other servers like that. Bugs for one used to be like that but wait they are nearly gone. From 2 full servers and the status HWS has now to not even 10 players last I saw their server pop up. All because they catered to the PVE carebears as they are called and tried to give them everything. That create bordem and people move on. Sure there are other reason betting that is the top of the list.

Thing is I need over 24k water and I am having no issues. I have 20 Generators on a PVE planet. Seems to be just fine. I also live in PVP space. Not going to waste time with Gens on PVP planets as some will destroy them because.

To all the PVEers out there that do not want to earn anything, do you think life is just going to hand everything to you?

Also you complain about those that are on planets but may not be on for 7+days. Ever think that one day that could be you? Maybe your parents are making you go with them for 2 weeks on vacation, perhaps your boss sends you out of town for training. How are you going to feel knowing that your game is not getting wiped because you could not get to the game within that 7-days?

Why would you even suggest that HWS tell people that can not be on everyday or once every 7 days that they can not play here? HWS has always been open to all. Rexxus and the others work so hard to provide content for everyone with every playstyle. Do you think HWS is going to start penalizing players that are gone for more than a week? So many things in life can easily keep you from a game.

Thanks for your hard work, I hope you and the community keeps that project alive as long as possible.

The Showroom feature is very cool, since I really want to know what’s inside of the Grand Tie - which is an amazingly large ship

It was love at the first sight

This is awesome update! This is exactly the reason why I play in HWS.

New content, fairness AND quality of life improvement all in one update!
Thank you so much for doing this.

I also love the idea of paying for donation stuff with RP (+ credits). That is BIG deal for long time players who sometimes struggle to figure where to spend RP & Credits (other than saving for ocd7 & upgrading EB every season)

Not to mention your latest, most brilliant idea regarding OCD with prestige levels.

By the way, setting “points” you get per each item wiped (to contribute for each prestige level) also sets a new structure of item values which will improve trading of more “obscure” materials BIG time giving yet another pursued path for credits and reason for people to hunt those hard to come-by but otherwise not so important materials.