Nice idea but impossible to support for long-term sustained fighting which is what we and the Russians love. And to be honest we’ve done carrier missions already and they’re fun but for a sustained attack you need an FOB on the surface to operate from if you want to make a permanent impact. Very similar to IRL strategy.

We’ve done the cv assault before and it’s fun, but you’re forgetting that now CVs only have about 7 minutes and bases will have to be built by hand in 8.0 Therefore it sort of nullifies this idea as you would have to work miraculously fast to build an even moderately decent base in that time.

Also Protect the carrier is also i’m afraid obsolete as the carrier can simply warp away as has been done in the past.

Nice idea though. I like your thinking, but I’ve seen this strategy attempted before and although it’s a novel one it is simply not one that makes us able to win wars. Not-to-mention that players get bored of it quickly. Similar to HV/SV only playfields. a nice idea but normally results in an empty playfield for the second half of the season.

For GG is meant to be the pinnacle of PVP so i’d say that Base-building and such is an important necessity of offensive or defensive strategy, with SVs and HVS also being integral to that goal (SVs more-so than HVs in the current META).

PS: We used the ole’ carrier trick on FST which was fun. Landed with 10 hvs and unloaded. But it only worked because we could insta-spawn a base to defend us as well as having all the time in the world for our CV. And if i had to choose between cv landings or between removing base spawning I would pick removing base spawning every time.

I know, spawn a ship and jump back into combat is what the most of the PVP-Players want. But maybe RexXxus designes a Planet where we could test it?! It would really help the Teamwork of a faction if really all had to work together to get an enemy down. As already mentioned a “Battle Royal”-Planet or something like that.

Well to be honest if you’ve heard us in discord you’ll see that we all use teamwork already. We’re very selective about what we shoot at and about what we attack.

But testing this on another planet would certainly be a novel idea. My most major issue is with us messing with the GG ‘formula’ so to speak that has been ultimately so successful this season. Testing it on a minor planet is fine, I just don’t want us messing with HW/GG without having some incredibly good reasons first.

Another issue is that with the whole BP spawning thing would be getting off-planet if you get shot down. Right now i am sure to have emergency fa supply, spawn pad, and a spawnable ship in order to escape in case i get shot down. For solo players without factionmates to rescue them this would be a major issue.

But i’m for the idea of testing, even though I personally believe that there’s more than enough teamplay in the big factions already.

PS: At everyone we should just probably wait until 8.0 comes around the corner to see how the dynamic of no-base-spawning on GG shakes things up

My apologies. I haven’t been hit with taxes enough to know how they work, I thought they were assessed hourly.

Its becoming more and more complicated at steady rate. I loved freedom of Empyrion on HWS at begining.
Its turning more and more into Second Life, take all your time and put it in game or play another game.

While i understand performance problem…
Parking on ECC is good as constructors are working while i dont have to sit behind computer, i can prepare stuff “AFK” and come back later for funny part.

I prefer base spawning as i dont have to spend time by building base by hand. I can prepare nice, well thought through base, i can color it and whatever else, i can cook it in factory and spawn it instantly.

And so on. While i dont have that much time as i had in past I simply somehow cant find a way how to fit Empyrion game session in my day and it will be even more timeconsuming in future.

HWS is constantly trying to fix things which Eleon is obviously too slow to fix, im not sure if thats always good.
On other hand i highly appriciate the effort as its insane dedication from HWS team trying to make game even better.

Example is CSW, I had a time in last weeks to only collect interest and keep constructors running on ECC. New CSW seems more stable, its Jaschas magic for sure but also slower, i find myself nervously sitting in front of computer thinking go go go, teleport me already.

So to get to the point, whatever you do, change and so on, take a look at it and think How can i simplyfy that and make it more convinient.

I like Connect 3.0 its a bit offtopic but also good example, I would like to see OAM as a form, Ill fill amount of cores i want to use to fuel each one and click just one button Fuel it at botom, It will fuel all of them with one click, not that i have to click iron, amount, fuel it and move to copper and so on, same for withdraw of resources.

Keep it simple, fast and convinient. As not that active im alone in faction, i dont even have a clue how much of what i can build, without studying it carefully. I dont even know if i can be alone in faction and go to GG as i vaguely heard something about 3 person faction at least. Why i even have to think about this, I just want to go whenewer i want and do whatever i want and have some fun.

But thats just my opinion of lazy person

kudos to HWS for the effort.

still possible after our announcement to use cb:startjobs.

We had to do this in regarding of HWS Skill Tree offline job process.

I try to implement it for the future.

But in general it is difficult to please casual gamers and competitive gamer. I tried to do it and I think it is possible if everyone know where its place is.
Sometimes however I see that casual gamer want to beat a 30 man faction at weekend, after he didn’t touch his stuff for 17 days and he should obviously be able to destroy that 30 man competitive faction with a prefab ship… you know what I mean.

We will see how it turns out in the future. Thanks for your feedback.

Thanks too, most terrible is to be casual player

Ill have to get uset to it i guess. Empyrion demands huge amount of time and its same like with pleasing PvE and PvP players together.
Its like with handbuilding of bases, good for one group, bad for other. Im happy for Zappe and Wise but not happy for me

Anyway Rexxx its progressing very nicely, im kinda glad Ill come back after some time as im sure there will be whole new game to learn.

Until then good luck and never run out of popcorn!

Is it possible to make more planets accessible to SVs. Even if you have to own a CV to jump to the back galaxies. That way, someone can station themselves on a planet near HW and access it with an SV instead of having to bring a CV?

I am fine with gaps that require a CV to jump from the Front area around ECC to the back area around HW. But as it stands now, you can use a SV for HQ worlds and ECC. Then you must do everything with a CV.

But as it stands now, you can use a SV for HQ worlds and ECC. Then you must do everything with a CV. 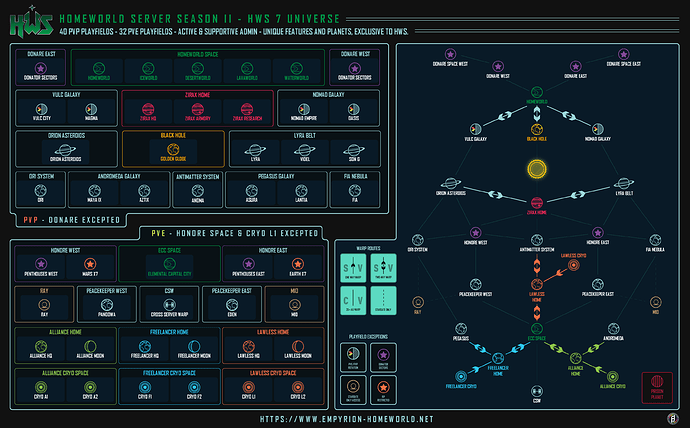 The whole top PvP hotspot area is accessible via SV. Check the legend at the map.

The SV wasnt intended for far travels. You have always the option to stealth your CV or hide it 15000-20000m in space

From what I understand, after the patch, a one man faction will be allowed just one base, and a 40 man faction 40 bases (coarse numbers).
The reason would be that the one man faction plays casual while the 40 man faction play competitive.
Now the question, why 40 man faction needs 40 bases if they are active in such large number? 40 players will trash one or two bases of the casual player in matter of minutes.
What you are doing right now is boosting the large factions so they can become even more casual. Just drop 40 bases and log in 10 minutes per day.
I can bet that if you average time spent by each casual on one day you will find it larger than average of big factions per day (take all their members time spent in one day and divide by number of members in the faction).
So basically you are boosting inactives not actives.
Plus the sisters and girlfriends accounts which will be insta added to big factions…

This is a 40 base global limit even if it had say 40 members. I’m in a very competitive PVP faction right now that will probably have no more than 12 active members as of 8.0. As a result we’ll have lots of bases but we won’t be placing them all on the same playfield, only very silly factions would do that as this is a global limit. So this is more of a balance.

Furthermore local playfield limits will apply still despite this global limit. So pvp hotspots such as HW and GG will still have a cap (currently 2) on the number of bases you can place per playfield.

Hope this clears things up Roboo.

It does, thank you.

How about creating a tax free PvE parking playfield with a hard cap 1 CV per faction that has ECC structures somewhere on the PvP side? Factions are looking for an always on system for refining, so create one away from ECC. A hard cap will prevent overcrowding, and having trader zone and all will keep it active.

PvE parking playfield with a hard cap 1 CV per faction that has ECC structures somewhere on the PvP side?

For PvP we have that already: the EGS Star in Homeworld Space. It has a Bank zone, a trading zone and more.

And technically I still hear the dev saying that constructor should work, even though the playfield is unloaded

Have to test this again I guess…

But maybe a new HWS feature can help with that… Orbital Factory? Oh, I didn’t say anything, go on.

Did somebody say Orbital Factory?

Now we are talking, so with this new Orbital Factory ill be able to play only in browser, filling it from OCD. Thats the way to go.

That sounds like a good idea. I was just trying to find a solution for the players who are saying they will continue to park at ECC despite tax increases because of always on refining in constructors.

I don’t get why you would need to do that in ECC space or even on the planet though. Just got to the Peacekeeper orbits or the HQ orbits and make a space station, problem solved! Or if you are cheeky you can make a base 30+ kilometers out in homeworld space, that will run around the clock, too!

13 hours remaining - what is the result of this discussion now? Which structure limits will become true? And what will happen to already existing structures, if they exceed the new Limits?