Ravien and Vermillion are about ready to release their big Reforged Eden v1.5 Scenario. 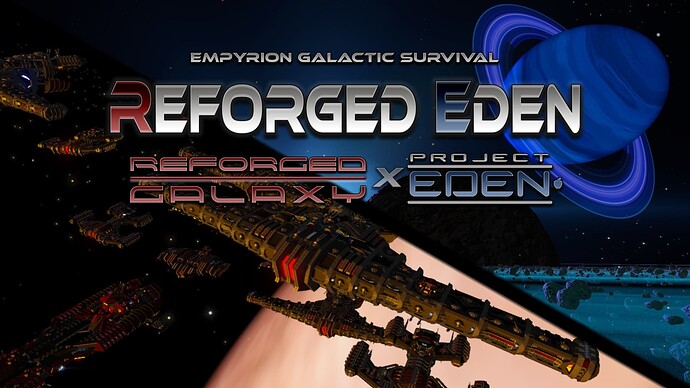 It is going to be somewhen this week or the one after (depends on bugs found etc.)
It’s the best pre-announcement I can make in such a scale.
That means you should prepare for the full wipe and be ready any time in the timeframe mentioned above!

As always, please have a look here first, what a full wipe means, what you keep or lose.
Since this Scenario is not done by me I don’t know if Ravien makes a 24hours pre-announcement about the release. So as I said, I can’t give you a more accurate date and just prepare already.
Nevertheless I try to ping you in Discord and here in the forum whenever I know more.

As always a 20% Support Us Discount just started, until the first day after the full wipe.

Those guys were very busy and added tons of changes.
For those please have a look here:

REFORGED GALAXY [MEDIA] Reforged Galaxy is an overhaul of Empyrion's configurations. From the top all the way to the bottom is a modern and updated...

The current HWS RE season took already longer than expected. We started the season on 1st March and broke our 3-month cycle too.
This means that we gathered a lot of information though (with a savegame folder size of over 60GB - biggest size in 5+ years HWS)
The biggest issue with running Reforged Eden on a populated server is the insane size and data it produces. This causes didsconnects, ship losses and other side effect bugs.
We try to optimize your experience in the next season with that knowledge and go back more strictly to our 3 month season cycle again.

The special thing about this full wipe is, that it is in little conflict with the HWS+ EU/NA patch coming soon. Conflict in terms of timely order. Since I don’t want to have two completely different feature sets for all 3 servers, I also don’t want to teaser too much yet.

The full details will be explained with HWS+, as well as the full spectrum of Origin changes. But for HWS RE 1.5 you have to keep in mind following key changes:

Again, since this Scenario is not made by me, it’s hard for me to evaluate what items should be put in what OCD categories. With your help I want to tackle this and keep the focus on replayability but still rewarding feeling of the OCD.
Since this is our first time categorizing items, I also wanted to do it at the end of the season when almost everything is explored and used by you.
A first draft (thanks to @Bob) would be following:

If you think some other items needs to be categorized or those needs shifting, comment below please with your own Excel sheet preferrable.

HWS RE will still be labeled as 99,99% PvPvE, with the 2 only PvP Playfields in the whole universe. We all know Reforged Eden is a Singleplayer, PvE driven Scenario but for those that do enjoy a bit of pewpew I will rework Golden Globe and Black Hole a little bit. At least I keep this “test” running until HWS+ comes out, a new, better PvP experience in general.

The biggest requested addition to HWS RE is the better integration of HWS Features, I know. Unfortunately it’s all dependent on HWS+, so it needs a bit more time.
That being said, I at least wish you a lot of fun with the upcoming HWS RE 1.5 season and with all the new additions Ravien and Vermillion added!

Take care and thanks for your support and for playing on HWS!
RexXxuS

If you think some other items needs to be categorized or those needs shifting, comment below please with your own Excel sheet preferrable.

NOTE: I updated the above Excel sheet.
EAH also got updated so the slot categories should be active now. Please test.

Because some asked me worried:

With the above changes it means you can store 5 of them per slot. Rest would be lost.
So all you have to do is: ocd:get all of them and then ocd:put them back in the OCD. They will be filled in empty slots then.

Yeah I bought the keep blueprint resources from the support page, and put into the ocd like extra parts for bases and cv’s and ore to hold until after the full wipe, I put all of my ingots and other parts like Optronic Bridges and matrixes in the blueprint resources. and the other support packages like the Alien Core and resource packages survive until you actually use them.
I was actually looking at the helios carrier or something similar, that is basically an empty shell, and the other cv modules that you dock to it, it seems to be a decent idea. The Carrier can be used mainly for propulsion and for firepower, while the modules can be geared for individual uses, It cuts down on cpu usage overall. Remember People, you Support Rexxus through the support page and through Patreon. And thank you for doing several decent game servers. Rexxus does a lot of work, for our enjoyment. OOHRAH, Brother, keep doing what you do…

i am sorry if i misread/misunderstood your post, just wanted to make sure you did properly read description of " Keep Blueprint Resources after season":

“All of your resources from your blueprint factory will be transferred to your OCD in form of Ingots!
So please make sure you have enough slots / room in your OCD .”

as far i know, that means that all your resources from Blueprint Factory will be transferred into OCD at end of this season so you need to leave enough space in your OCD for them

advanced cores are in the list for epic rare. also epic laser drills and standard armors are currently not allowed.

I think for this season you should leave the OCD the way it is (don’t change the size of stacks or the way the items are categorized). Changing the stacks size or categories now only result in loss of items and time for players.

2.Category of items
I think the way items are categorized now need a complete rework for RE. Changing and items category right now it will automatically change it’s stack size leading to point 1 from above (players waste time and items getting and putting stuff back into OCD). Right now there is no unique criteria (like scarcity, how hard is to get, how much time you need to get, how many resources an item contain, and so on) to sort the items. For example why Aluminium is epic compared to Zascozium because both can be automined, and gold is lower categorized than Aluminium tho it can’t be automined. Why newer content (antimatter stuff, shields and armors) are Legendary - stacked by 1 when you can keep their components in 25k stacks and make hundred/thousand of them. Why the single most time consuming item (Voidium Drill) it’s not Legendary, and the single most powerfull item (advanced core) it’s not Legendary and also can be put in OCD. Why CPU extenders (inclluding basic ones) are Ultra Epic tho you can craft them a lot more easy than Dark Matter Pods. Also turrets should be common items (it’s a PVE server) and you should be able to recycle and use all types of turrets in the game (as a reward for killing and salvage NPC). Right now you cant put in OCD “zirax” turrets tho you can salvage them and can’t get/recycle any “alien” heavy turrets tho for some of them you can still craft ammo (see imperial heavy missile turrets).

As for the new season we could have a new OCD adapted to RE, not just taken form other versions, starting form what OCD means and then set the stacks size.

If OCD it’s considered a way to carry “wealth” from one season to another, considering it’s a PVE server, than you only need 2 categories max: legendary and …the rest (there is no point in having 5 categories with diffrent size stacks). We can keep the current stacks sizes (doesn’t matter to much), make no categories at all and ppls will enjoy PVE content, killing stuff, recycle it. Also getting and putting items into OCD should be a lot easier than is now and the OCD level should give you only slots.

If OCD it’s considered a way to give you some start advantage (and somehow link seasons) then items should be categorized based on 1-2 criteria (not a mix bag of them) and also stacks lowered.

If OCD it’s considered a way to keep some items so you don’t have to spend a lot of time to make them again (voidium drill) or that sweet loot armor with low chance you got, than make OCD hold a few items so no categories / no stacks are needed (this option will influence a lot recycle command tho).

I felt a lot better in the first days when ppls had nothing and everyone was struggling to progress than at the end of the season when you can just spawn ships from thin air (e.n. Factory). Being allowed to carry all the stuff from on season to another it’s like taking the game off the pause (in the new season it will take only a few hours till ppls get to OCD then they un-pause the prewious season).

I bet other ppls have better ideeas that could improve the game experience.

this is all a test. this is the first time The OCD was used in RE. these are the proposed first draft numbers for this season. we will see how it affects the universe next season.

Does this mean we are now returned to our regular programming?

not yet, the new scenario was just released about 6 hours ago and still in testing 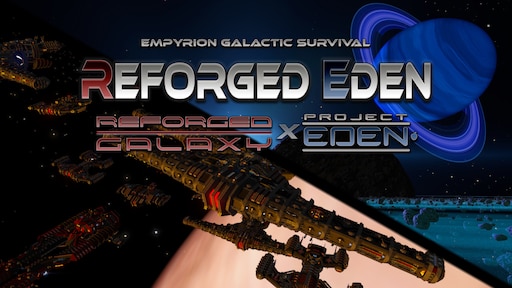 The review of the rarity of items considered in the topic concerns only the RE server. Who and why came up with the idea to review and apply similar requirements for OCD on EU and NA. The difference in the economies and priorities of servers is colossal and equating everything under the ode to the bar looks at least stupid and incomprehensible.

OCD on EU and NA can be safely ignored right now.
Once HWS+ comes closer there will be a similar new excel table with different categories for HWS+. The best you can do: do nothing and wait.

I would sit and do nothing if: 1 I could put teleports in one slot, but once I can’t. 2 right now I’ll put a few hundred teleports in the slot, and tomorrow you’ll say-oops, only 1 can be in the legendary slot and with the rest … well, do whatever you want. PS: That I have no information on the RE server with epic weapons, but on EU and NA EPIC weapons are lying around like a couple of ingots of metal, this is an EPIC imbalance and it is better to work on this issue, especially since it is promised to make this weapon REALLY epic and under this pretext all OCD were rigidly cleaned.

Hm, I repeat:
you don’t have to put anything right now. You don’t have to think about imbalance right now.
HWS+ will change categories, items, rarity, trading, loot distribution, etc.
I give a lot of time ahead the full wipe, so players can adapt their OCDs.
Right now it’s just a work in progress.

Good Morning everyone
yesterday at 21:50 I wrote

Really nice to see 135 players online by the way!

Half joking, cause I didn’t think 15 players would come out of nowhere within the next 2 hours.
You proofed me wrong!

I appreciate your invites you did and I stand by my word! 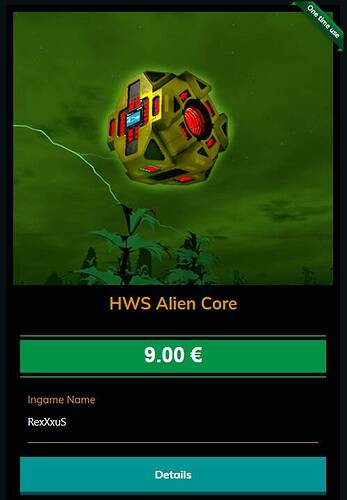 *I took ±2 hours of my announcement date, so in reality it affected 258 players that were online during that period. Thanks for playing on HWS!