The cure is to incentivize more fun pvp with easier access to it “by not increasing resource cost” for getting a decent pvp ship, a better class structure and sub-class structure, a better optimization, a better logical progression through out the game, and the end game should not be pvp itself but territorial control.

These are the old screen i could find from my pc. The biggest increase in resource cost has been titanium, zascosium, erestrum and sathium. Titanium that replaced sathium has risen from an average of about 7-8 times. Zascosium has risen from about an average of 5-6 times. other resources have significantly increased as you can see from compering the old to new screens. you can also tell by the 2 sv screens that the construction time has been raised almost twice from before.

The first is from a destroyed scyth sv from alpha 7 that has been cored in hws. 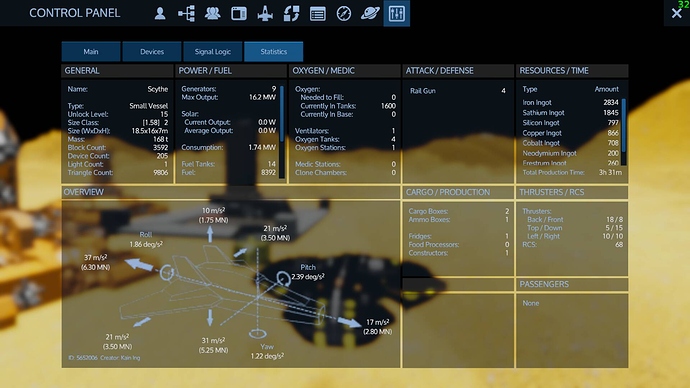 Scyth sv our current alpha 12 in hws; the exact same ship from alpha 10 above. 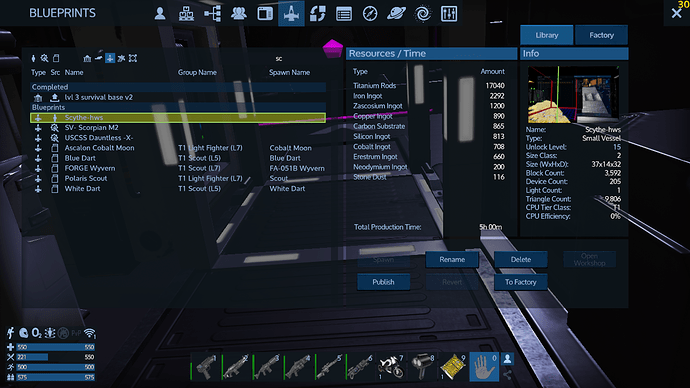 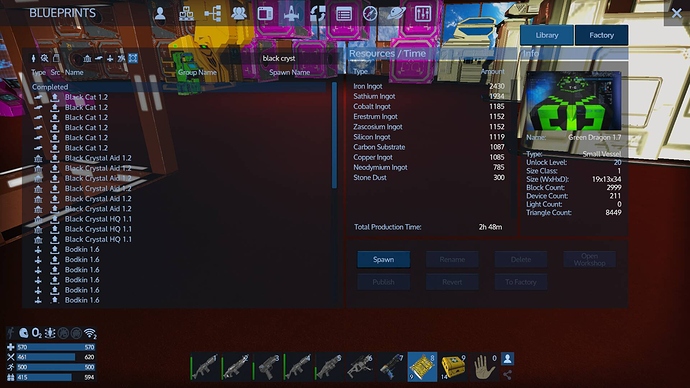 Green Dragon sv from our current alpha 12 in hws; the exact same ship from alpha 10 above. 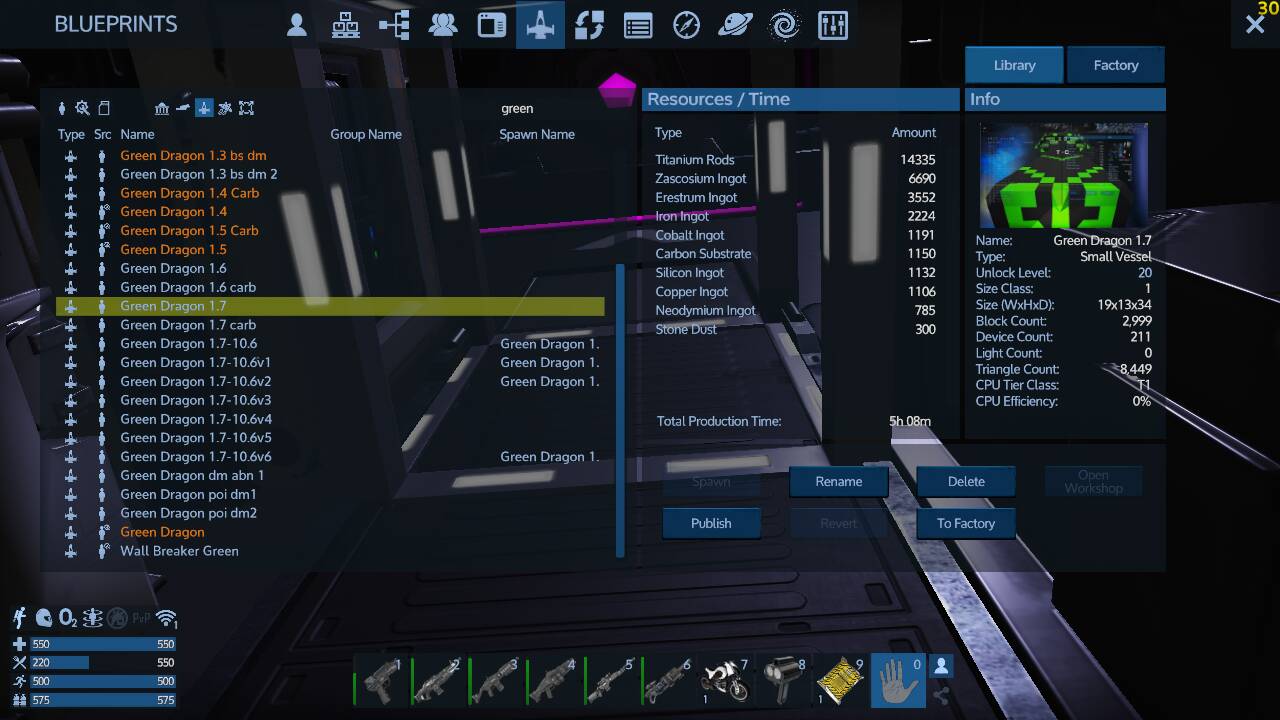 This is my Green Dragon sv that is alpha 12 cpu complaint. As you can tell the high resource cost is about the same then the non complaint cpu ship accept the cpu complaint ship raised the construction time even more. 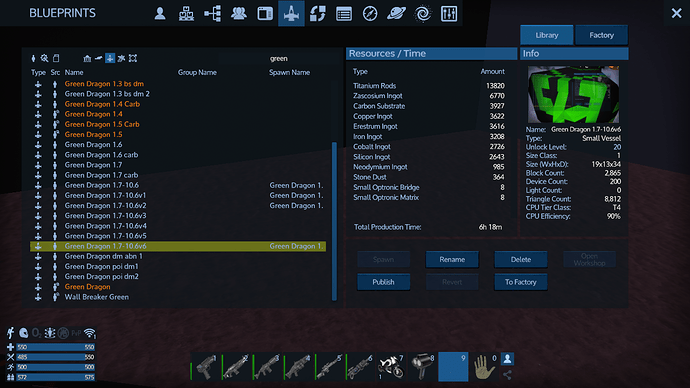 The third is from my own pvp carbon cv called The Crow, class 1 from alpha 10.5 in hws. 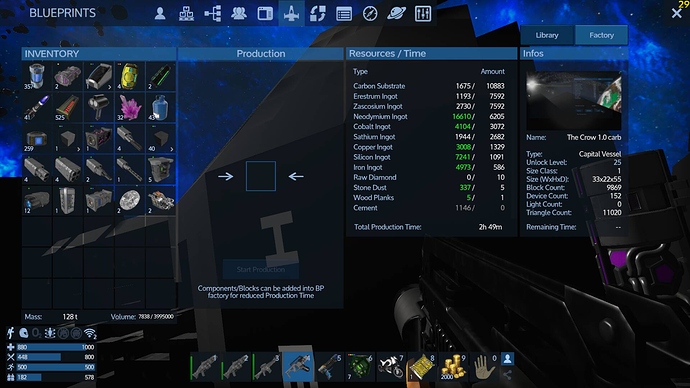 The Crow cv from our current alpha 12 in hws; the exact same ship from alpha 10 obove. 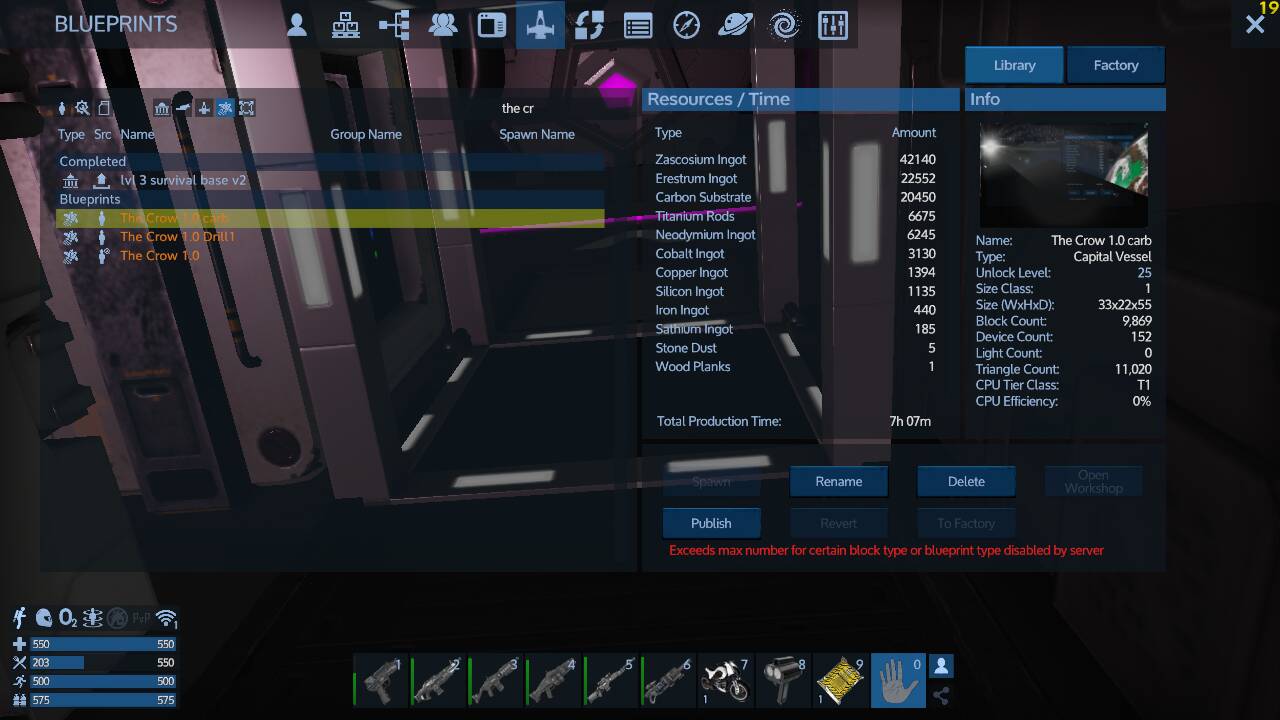 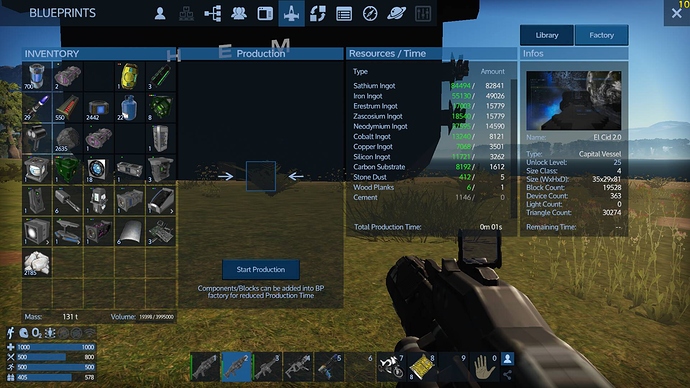 This version of the EL Cid cv is not exact same but the closest i could from from my old screens. The only main difference is that it has 2k extra armor blocks. But as you can see in alpha 12 in hws there is a huge resource increase of sathuim for almost an identical class 4 alpha 10 cv ship. 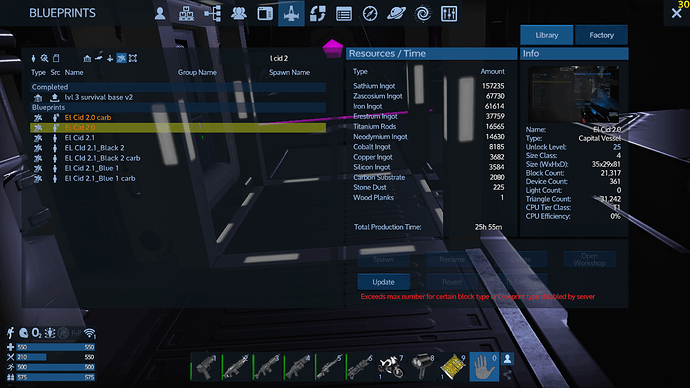 Secondly to counter your claim I will provide you with 2 comparisons.

One is of a Legacy Battle Cruiser from a9 vs my current facetanker that I use occasionally. This second CV called Black Scorpion is a good comparison marker, because it is currently almost the heaviest and well armoured you can produce for the flight model. The reason I am using this as a comparison point, because under current CPU and Flight Model, it’s my most expensive and well armoured ship. It fills the role that the Legacy Battle Cruiser was designed for.

The second set of blueprints I have to demonstrate to you is 2 SV’s designed exclusively for the same role. Cerberus was built in a8 and Dauntless -X- was built in a12.

This is the Legacy Battler Cruiser ^^^^^^ 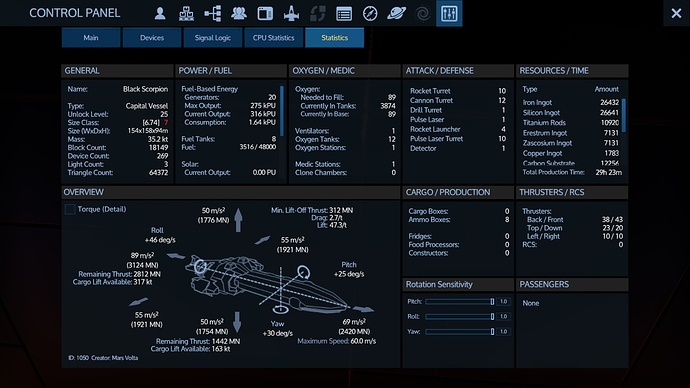 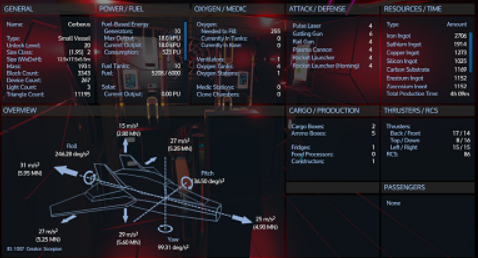 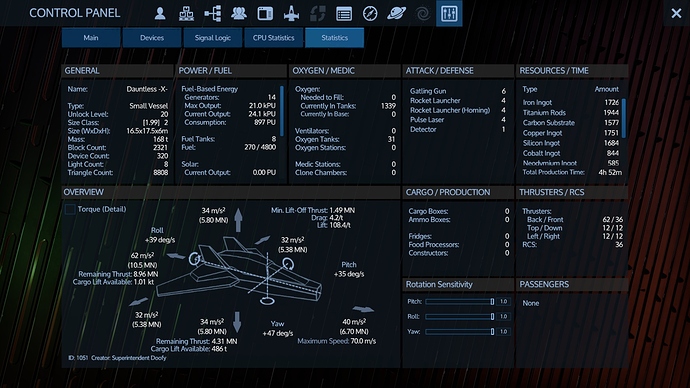 To summarise my point. As you can see here, the a12 ‘meta’ blueprints are vastly less expensive and faster to produce than pre a12 blueprints.

Your examples are not viable, because they are not usable and never will be.

The point I am making is that if a ship is not CPU compliant, it cannot be used on HWS. Therefor it is not viable in your argument. You argue that players cannot enter into pvp because the resources required are more… well I just showed you that they dont.

And in response to your latest comment… I ask you, is the resource cost for blueprints much more expensive in HWS than in Vanilla?

The point I am making is that if a ship is not CPU compliant, it cannot be used on HWS

a horse and buggy costs a lot more than they used to back in the 1800s. it’s ok though, we fly spacecrafts now. the construction materials are much more plentiful as well so bonus

This is the entire premise of your post. Is it not?

Increasing resource cost is irrelevant. Why? Because ships need to be CPU compliant. You are unable to understand that CPU is relevant to your claim. Because we are ALL forced to build within its parameters in HWS.

Therefor, as per the images I linked to you… it is NOT more expensive, it is less expensive.

Does it say anything thing about CPU on this post subject? No. The pictures you provided are of vanilla configuration and not of hws. Stay to the subject of this post please, thanks.

Your blueprint photos you provided cannot be used in HWS in a12. Therefor they are irrelevant. I suggest you build a vessel designed exclusively for HWS that would actually work in a12 on HWS to use as your example.

See I didn’t mention the word you seem to hate so much.

What is the difference between vanilla resource costs for blueprints vs HWS? Can you perhaps describe this point in further detail?

I have a cpu complaint sv of the green dragon version which is still much more expensive in resources cost then past alphas of hws configuration.

About vanilla configuration? Thats not the subject. The subject is resources cost in hws through alphas not vanilla.

Stick to the subject please, thanks.

The photo of your a12 Green Dragon says 0% efficiency, therefor is not compliant. Do you have a pic of your compliant version?

" The pictures you provided are of vanilla configuration and not of hws"
This is your quote. What is the difference in resource costs between vanilla and HWS?

What is the difference in resource costs between vanilla and HWS

So you don’t know? Thats strange the screen is right there.

I’m struggling to understand how my examples are irrelevant. Your photos compare multiple alpha differences, not HWS and Vanilla differences.

HWS resource cost is a bit higher than vanilla. Most likely due to the vast amount of resources available throughout the universe. I have helped a lot of new players find their way gathering resources and aiding their builds. There have been lots to go onto PvP once they realized how to recover quickly from their losses and have backup preparations ready to get back in the fight. I honestly feel the biggest thing holding players back from PvP (and lots of different things that matter) is the fear of the unknown.

Knowledge is primarily what I see keeping those from venturing out in deep end of the pool. One of the key things to remember is to prepare to lose everything you bring and always have a backup, of your backup…of your backup, ect.

Needed resources have never been this abundant in the mamy prior seasos i have played in. It just takes a bit of searching to find specifics you need.

Another key factor is the knowledge of proper building mechanics to ensure your ships are able to maneuver and be sufficiently equipped to stand up in a fight. This is where the community comes in play. You must rely on your fellow players from time to time and discover the trade secrets to dealing with the many changes from the “Seat of Pants” management the developers have guiding them. It has gotten them this far so let’s see where it takes us.

All in all we need to share ideas on how to grow this together. There are lots of very helpful tags everywhere. A few members have put up their designs in the workshop as well. Check em out and ask for advice. Constant changes are the “forever meta” i guess

The subject post is about hws alpha differences and has nothing to do with vanilla.

This is a side by side comparison. HWS on the left and Vanilla on the right. I think the differences are negligible. It seems to be about a 25-30% increase of resource cost in total only in Zascosium, Erestrum and Sathium. Regardless, you could use the HWS picture on the left in my example. Using Vanilla as my pre a12 example should only increase the difference between resources, yet we still see a reduction in cost.

This is my Green Dragon sv that is alpha 12 cpu complaint. As you can tell the high resource cost is about the same then the non complaint cpu ship accept the cpu complaint ship raised the construction time even more.

I added my cpu complaint ship above.

Individual cost per device/block has gone up on HWS
Number of devices/blocks on a meta ship have gone down dramatically due to CPU
Mostly balanced itself out, average E/Z cost higher, average Sath/Iron cost lower

E/Z cost of meta CV from old Alphas has gone up if you ran low thruster counts, but is unchanged if you went high thruster count to a low to become CPU compliant.

Sath/Iron cost is a fraction of what it used to be, in order to maintain mobility and become CPU compliant.

It’s not more expensive, it’s just moved around a bit. For me personally total costs are down or the same from pre CPU.

No one with a reasonable amount of playtime (Nothing serious, just average game play) should have any trouble spawning in a meta ship.

If you want to change lanes and say its Vanilla Vs HWS, you have to consider how much easier materials are to obtain in HWS.

I agree with alot of your points Bob. Building PvP meta vessels is a rather large learning curve and could be offputting especially to anyone who doesn’t really like building. That is why I am passionate about helping people into PvP with a rolling start and a basic level of understanding. I don’t subscribe to the whole secrecy ideas of keeping pvp mechanics to oneself.

“I added my cpu complaint ship above.”