the recent months one of the biggest PvP feature discussed was the “Proximity Alert” one.
Not only on HWS. Also on the Official Servers.
Hence I made a dedicated topic about that and other topics:

Hi Survivalists, as you know I'm the Owner of the Invader vs Defender Scenario and the official servers. @Taelyn helping me with administrating it....

The main issue of this feature is the usage in Space / Orbit. Since Empyrion has the “Decay” setting, every structure less than 10 blocks, will be decored automatically after few hours.
So the Meta was to spawn tiny trash decoys with 11 Blocks around (or even worse in Asteroids, breaking our rules) and wait for victims.

=> Flares are counted as Blocks!? 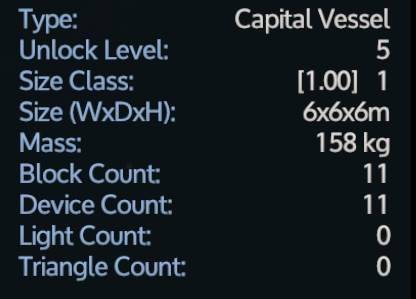 => A decoy made out of Devices, which has a very bad render distance setting. Almost an invisible Decoy in space.

As you can see players become smarter and smarter. They try to be as efficient as possible.
The screenshots above are for me not acceptable anymore and from perspective of new players or unexperienced players, an instant disadvantage / unsatisfying experience - probably forcing them to uninstall the game or just hate PvP.

PvP in general is currently not in the best shape - especially on HWS EU.
An initiative will be started soon to boost it dramatically. Making it more lucrative, fun, rewarding especially for PvE / New guys.

That being said a solution to the tiny decoy problem had to come.
Our approach:

You get Proximity Alarms only, if your Structure has at least 100 Blocks now!

I think 100 Blocks are fair to be seen in Space. What do you think? Make suggestions otherwise please.

And yes, neither 100 Flares are the solution nor abusing the HUD marker in combination with manipulating the center of objects in Empyrion as shown in the first screenshot.
Unfortunately I see only a rule to fix this issue. (I hoped for common sense)

I agree that beacons are too difficult to counter today. They should be able to be somewhat easier for newer players to detect so they know why there are suddenly experienced players coming after them.

Could you require beacons to have certain types of blocks or to be in a certain state in order for the alert to fire? What about beacons having to have at least 1 turret, with ammo, and powered up (meaning also a generator and fuel tank)?

If not, making them bigger makes sense to me.

Could you require a beacons to have certain types of blocks or in a certain state in order for the alert to fire? What about beacons having to have at least 1 turret, with ammo, and powered up (meaning also a generator and fuel tank)?

Good question. @Jascha have to answer it.
Would help at least to prevent the silly “No Flares for Decoy” rule…

Or, what if only one specific blueprint could be a beacon? HWS could provide the “Beacon” BP that all players would have to use in order to setup a beacon.

Can’t force it. Only by rules…

One more step to PVE server …

I like this a lot. Perhaps HWS can make use of some of those deco blocks that look like antennas. So, you have to have the antenna block, the ship has to be powered, and how about doing something like the more blocks it has the larger the proximity alert field is? So, yea cool you want to have a 11 block beacon but your proximity field is then like 50 meters.

In my opinion, the default alert fields are too large as well. Most of the time a player doesn’t even know there is a beacon there until it is tripped. Can there be a beacon detector? So something like a red drone dot within a 3km range, but it costs huge amounts of energy to run. So ships will have to account for countering beacons in their designs.

Also, perhaps different antennas have different max ranges for proximity alerts. So a small antenna can’t produce the maximum field. Lastly, the antenna should have a small window of operation after power is lost for ship that were actually fighting and got blown up. That will help determine if players are looting or guarding the ship.

I like to think that beacons should have lights. And antennas. Lights that flash. And if it could scream at you would be better.

Also the problem with the 100 block rule is that most escape pods are under this minimum and would never broadcast proximity pings. So then after a fight where you’ve already had to ditch to a pod and now have been blown up a second time you’d have to guess if they are camping your backpack or not. That sounds frustrating for new players as well. It creates a new problem albeit lesser of one.

I’m not sure if RexXxus also means structures under 100 blocks don’t generate proxy alerts to a over 100 block structure anymore.

I think he meant they would need to be at least 100 blocks to generate an alert.

The screenshots above are for me not acceptable anymore and from perspective of new players or unexperienced players, an instant disadvantage / unsatisfying experience - probably forcing them to uninstall the game or just hate PvP.

New players don’t destroy proxies, usually they don’t even know how they work or don’t care about them. Usually proxies are destroyed by opposing factions of more experienced players.

If you want to make it less frustrating for new people I have a suggestion: modify cb:gohome to move player to EGS HQ if there is no home set up and automatically execute it after 3rd death in PVP area within 5 minutes. This could prevent abuses of respawn here option as well as help new players if they get killed in PVP and don’t know what to do except respawning where they got killed only to be killed again or using fresh start (which sounds more scary for them then it actually is)

PvP in general is currently not in the best shape - especially on HWS EU.

Currently? From what I know it used to be like that for many seasons, with small exception of first part of last season when dominating factions have switched.

An initiative will be started soon to boost it dramatically. Making it more lucrative, fun, rewarding especially for PvE / New guys.

You get Proximity Alarms only, if your Structure has at least 100 Blocks now!

This doesn’t solve the problem as you described it - structure with core and flares will still be almost invisible, but it forces everyone to respawn all proxies so it’s a bad change and most likely there will be another one needed so instead of temporary solution like this please make the one which actually solves the problem.

This may be inevitable since eleon is focused on pve game.

If you want to make it less frustrating for new people I have a suggestion: modify cb:gohome to move player to EGS HQ if there is no home set up and automatically execute it after 3rd death in PVP area within 5 minutes.

this is a great idea. the main point being to have another option besides getting spawn killed, and fresh start. even I forget to reset my home spawn sometimes and find myself in a death loop. luckily my faction mates eventually save me, but new guys usually don’t have that option.

As for solving the proximity beacon issue. I think the only fair way for both the hunter, and the hunted is to change the distances you see, and are seen by it. As example: I should see the beacon on my minimap before it sends a ping out. that way anyone who pings a beacon knows they are responsible and can act accordingly. Even from a realism standpoint a passive system “beacon pings” should not be more effective then one monitored by a person, “hud, or minimap”

Like the idea with the powered antenna blocks necessary, because it’s somewhat self explanatory. The antenne blocks only exist for CV/BA but there is also a detector block for SV. Maybe it’s to complex to implement all this?

Anyway the 100 Block solution isn’t a good one, as one can easily still build structures invisible before the HUD Marker appears at 250m.

On the other side it isn’t to hard to figure out how to build a ship able to survive some hits to K-Warp out, especially with shields now. The last time i viewed there was also a “hard” in the servername.

Perhaps the beacon ships have to be powered to be a beacon? IE if it is not powered and on then no proximity alarms.