What happened:
=> Unfair tax amounts for faction members when alliance breaks rules. No warnings given to alliance.

Player(s) with issue:
=> ALL (faction based)

How can we help you now:
=> Resolve issues with Alliance rules on structure placement, Only faction breaking the rules should be penalized not the entire alliance. A lot of newer members including myself have close to negative bank balances as a result of the taxes this week due to structures being placed on planets with faction limits. We saw warnings but our structure commander showed ok, then our structures were deleted due to another faction placing structures. No warnings given for Alliance members for Shared playfield structures. Please implement a system to warn ALL members of an alliance about alliance asset structure limit exception or remove penalties for Factions who do not break the rules in an alliance.

I think you mix up 2 things:

Since others of your faction are also complaining and saying the same thing “alliance members are taxed too”, let me ask you: How do you know?
Can you please give me proof of that.

Because what I see looks very different:

The Ship in question:

People that got taxed: 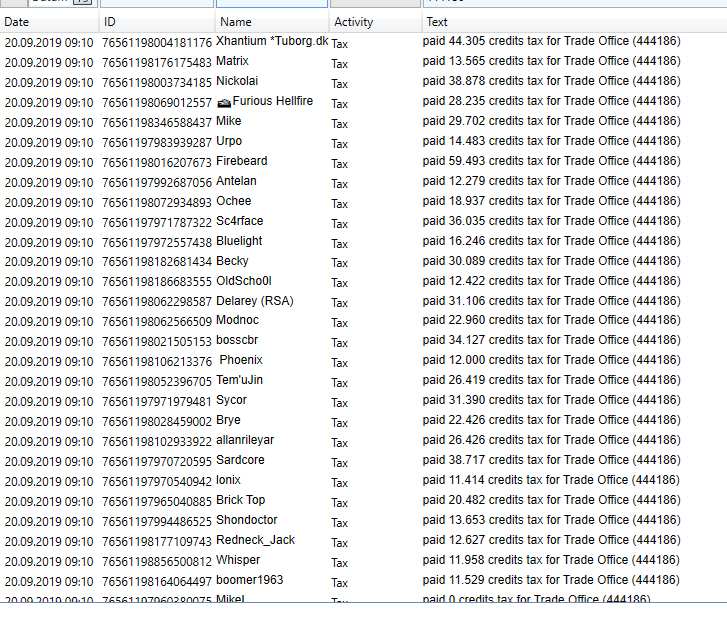 Same for the other structure you got taxed for: 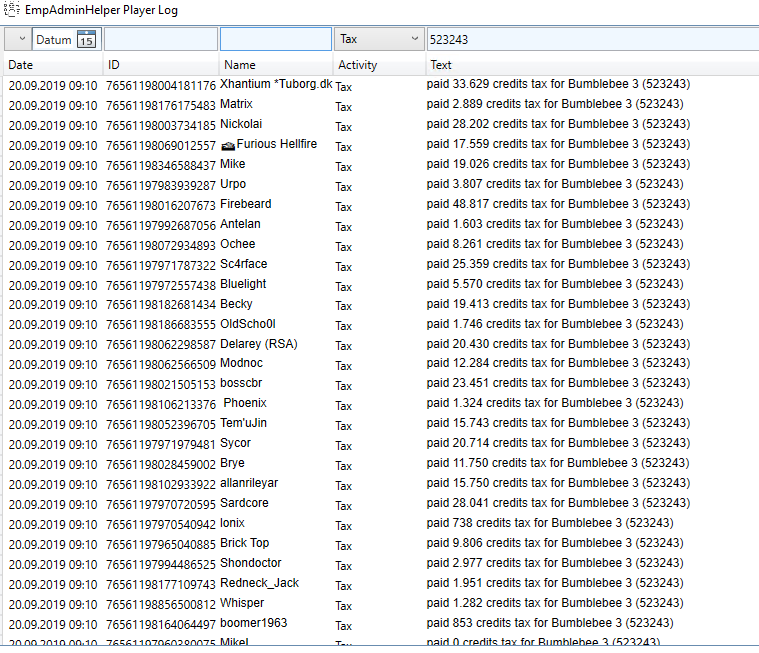 ALL from YOUR faction. None of any allies.
So how do you come up with “allies” are punished?

Perhaps the Tax might not be the correct definition, however we have been fined a large sum of credits for the actions that one of our allies has done. This looks like tax , but could be a punishment fine if you want to call it that instead. Either way its the issue ive come to the forums with today.

Well one thing that may help here would not to let anyone set structures if the limit has been met. Big problem is I had placed 3 bases got the warning but in that I had looked everywhere for the other base and could not find another base. Allies should be able to see ally bases or the structure limit needs to be worked on where no one can put too many structures down. Thanks Jascha!

Allies are from a different faction. The structure you were taxed by was in your own faction, not an allied one.

I think that’s more on Eleon’s side unfortunately.

Big problem is I had placed 3 bases got the warning but in that I had looked everywhere for the other base and could not find another base.

Sometimes the system lags a bit and will give false positives in chat. Two things to look for:

Sorry @ TheState you are incorrect. we have logs to prove that another faction in our alliance caused this to happen, they even admit the mistake. I was also online when this was happening and it was mayhem in alliance chat as our own structure commander for our faction was showing 3 buildings in our faction on golden globe. This is the maximum allowance per faction. We got warning messages within our faction to many structures had been placed down this morning. We checked and still 3 faction bases remained. We asked in alliance if anyone was placing structures and noone replied, mainly due to a language barrier perhaps, not everyones primary language is English. This went on for another 3 warnings and then a base was removed from game, this wasnt our base it was a named base without a faction tag. We then later found out we had been fined 400k each in the alliance in every faction within it. This has already been discussed in another thread and the facts are in there with screenshots from another member of our faction. So just to point out a FACT - the warning message do not say ALLIANCE they say Faction. And the structure limit is a Setting in the configuration file within the Server itself. I should know i have played with these settings in the past with my own servers.

Sorry @ TheState you are incorrect. we have logs to prove that another faction in our alliance caused this to happen, they even admit the mistake

The State is reffering to the screenshot.
See the other forum post about alliance punishements.

@Jascha is looking into it. This isn’t the technical truth but more your gameplay decision. The most important thing is that the leader knows exactly what allys he accepts or not (@Firebeard) In your case with hundreds of faction + ally members this is your responsibility. For now it is indeed a bit limited to only chat warnings - which were ignored in this case and communication with the guilty guy on Golden Globe not being made. We will work on a better way to display it on HWS Connect.

. So just to point out a FACT - the warning message do not say ALLIANCE they say Faction.

Thats not true. You mix up both situations.
If the Alliance is over the limit it will mention alliance in the message. And if its just faction, its the faction. You guys just had both happening.

This is for example the Message you got for your Alliance exploit by the other faction in your alliance:

“You are only supposed to have 1 faction CVs on Golden Globe for your Alliance. You have 2. Please remove all other 1 faction CVs, or they will be taken the NEXT time!”

The only thing misleading is the log, but I changed that now for the feature. I will also add the creator of the ship in those logs.

But again, lets use the other thread to speak about the alliance subject.