What happened: TPP has set up bases around a PvP supergate which constitutes “warp camping”.
Player(s) with issue: Phoenix
Server: NA
Time (cb:time): 04 July 2018 03:24
Playfield: Homeworld Space
Structure Name(s): See picture below
Structure ID(s): See picture below
How can we help you now: Please remove these bases as it is a blatant violation of the section “warp camping”. The supergate is a mechanism that allows players to warp from 1 playfield to another. Therefore, bases placed around these points that immediately lag shot anyone who enters the playfield is considered “warp camping” and should not be allowed. 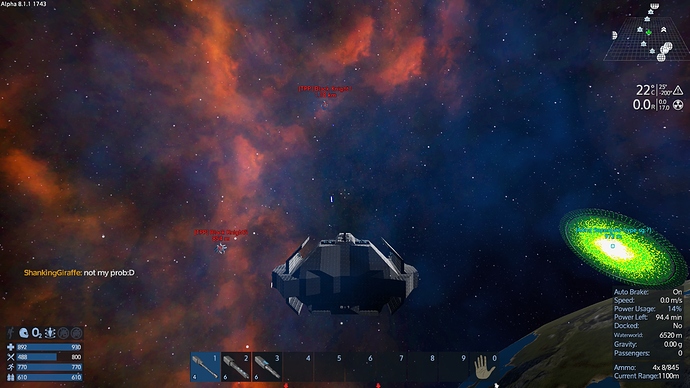 the “do not warp camp” rule is for now not active for Supergates, because I will configure very large zones. It’s part of the risk / adventure to not know what is on the other side (we would remove that rule completely if the current random factor of 3k would be increased for default jumps)

if that is the case, then this needs some serious adjustment, because there is no defense to warping into a system, lagging out for five minutes, and then getting shot by 15 bases.

The best defense is a good offense?

The super gates are a luxury item, not a necessity, you don’t need them to get around the universe, therefore it seems like a great opportunity for some PvP. IMO at least.

The warpgates are not a luxury item, they are a server asset available to all players, not those who choose to camp them with bases that cause 5 frames per second to anyone who renders them.

Furthermore, you are ignoring completely the current situation on GG which has proven time and time again hands off moderation simply leads to only one group of people owning and controlling the entire planet, with any attempt to engage in fun pvp, resulting in that group’s termination overnight.

Average joe doesn’t have the resources or time to simply remove the bases, and lets not forget the dogpile that happens whenever someone attacks a space station due to proximity alerts.

I will think about it.
At the moment it is indeed part of the warp risk as an additional, comfortable and free way of traveling. Some risk has to be involved, especially thinking about movies or the Freelancer Game where you never know what is on the other side.
Make sure to warp the normal way, destroy these bases and then use the Supergates again.
Or new player can pay a “Security & Guard” fee to PvP factions to get rid of them. (similar to the stuck => ask Alliance for help mindset)

I would really like to see more “issues” are solved with roleplay rather than rules and rules and limits left and right.

It is just sad that people have to resort to setting up bases right there. Those bases you know are just there to grief anyone that uses that function. Most of which are the PVE people trying to see what PVP is all about. Then they are destroyed before they load and well not only are they rage quitting but they really will never go to pvp again.

In my opinion those are the serious issues with allowing bases there. Now to allow people to sit there in CV that is one thing as they are present for the fight and that is PVP. Bases do not require anyone to be there for the fight. Just seems to me if HWS wants to be known for fair gameplay then any attacks no matter where that are occuring before people can even load to the playfield is not fairplay. Once again this is another EXPLOIT used on this server which seems to be a common occurence among some of the PVP factions. Exploits I believe are alreadty covered in the rules and NOT allowed? How would this be different.

People this is the real reason I am already getting bored with HWS because I know in PVP I am not getting jumped fairly at all. I will be hit with any exploit that can be used and to me that is cheating. Cheaters do not win anything they are just cowards.

In Titan, the only way out is the SG. There are several powerful ships camping the gate. I would think that in such a case either the SG is a protected zone, or you need to allow for normal warping out of the system?

When the risk turns into absolute death, no one will use the gates.

Sadly, most players will not be able to resolve the base camping issue on there own, any attack on the bases on NA currently results in 10 or 12 players dog piling the attacker from the alliance that owns them.

I hope you get this sorted rexxxus, I love this feature and would like to make use of it.

Yeah that seems to be a big thing in HWS atleast on NA. It is never an even fight if you attack a faction of 3 with 3 of your own members there is nothing to say 10 more do not show up. Sadly when that happens everyone lags out horribly and well the higher numbers will win there at some point.

Unpopular way to resolve that is no more than 5 in a faction and only allow one ally. This means never more than a group of 10 coming at you. Though I admit that number is still high. At the same time I do not see many PVPers willing to except that. Most seem to rule by as was said Dog Piling. Does not matter how good a fighter you are or how good that base is you built. Enough piles on top it will eventually fall.

I mentioned another way to PVP and no one wants to get out of their blocks of armour. They right now take out your AG device and then dig to your core and game over. So 10 SV come at your base at once I do not care what you do but your turrets will be overwelmed and fail. You will loose that AG since it is right there on surface. Then they will back off go underground dig to your core where turrets do not work and you loose.

Right now PVP is balanced ( in my opinion) toward the attacker always winning. So if you are attacked just take out your OP and log out you lost. Unless you have an alliance with the next biggest faction and they are all on you are done.

Now if they were forced to run a base attack like a POI where they have to get out after taking out your defenses and proceed on foot then you have a chance. Now all the types of traps that Eleon added to be used can finally have purpose. That mob of 5-10 coming at one defender may finally end up loosing if they are not prepared to get through your traps. At some point they will loose their hand weapons and have to pull out. You get to keep the base and they get to try again another day.

your correct, but any solution cannot prohibit member counts, because I do not want all 10 of my friends to be completely unable to play in the same faction as me, lot of those guys don’t even do pvp too. I think the best solution honestly would be to constitute a rule for no dog-piling (say no more then 1 additional member on each side) you could leave it up to the pvp factions to report violations because it would be in their best interest to do so.

I understand not wanting the limits but your idea would never be enforceable and would create a lot more arguing. As it is now you know when there is a PVP battle as there is usually an arguement about it either in game, forum, or Discord.

Could be that there is just no real solution who knows. Some things should be common sense and just common fairplay but maybe I am just foolish American that feels fair play means one vs one not 10 vs 1 or that diggin under a base/ to core is just unfairplay.

didnt see you complaining when the zerg empire controled gg 2 seasons ago so why now , gg still had the same lag problem etc etc, sooooo?

I was complaining even then, but to a lesser degree because the “Zerg” was much smaller, now days it’s called the alliance and it has well over 80 players. It’s also ironically caused more problems then it set out to solve.

Also GG is worse, much much much worse. Used to be 30 was obtainable, go near an alliance base these days and your lucky if you get 12.