after the first Teaser about the HWS Marketplace and Chatbot rework, it’s time for another new feature in HWS 8 I teasered already couple of times 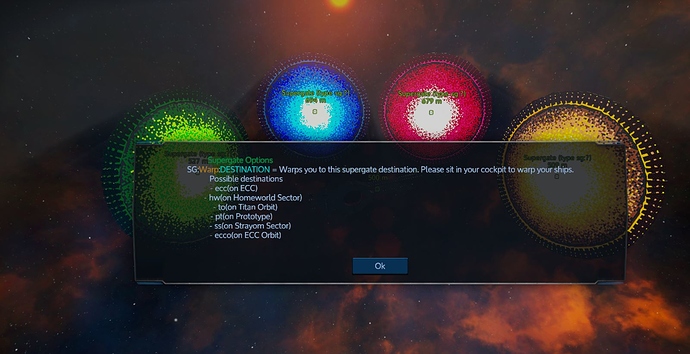 With Supergates you have now the possibility to warp with your ship(s) to another playfield - since the normal Portals can only warp your player.

This allows more dynamic within the Universe.
Especially since we implemented for the Supergates a simple “Allow” and “Deny” system, similar to the Sector mechanic.
This means for example that you can warp away from the Prototype Startplanet with your ship (after you have chosen an Origin) but can’t warp to that Supergate back again (One-Way).

The other way around: you can warp to the Supergate on the ECC planet but can’t warp from there to other ones.

Type sg:? in chat in HWS 8 to see the possible destinations

Some requested it and it’s our first version to a probably more complex system in the future.
In HWS 8 the size of the Faction and the activity in general matters more than before.

We have players with over 3000 playhours in total or +1000 playhours within one season. We want to reward this even more passively (along the other new systems as the Vote reward for example).
Regarding the Origin differences I want to see bigger decisions and immersion. Freelancer are well-known Solo / Duo Adventurer / Hunter. Alliance is a big collective organisation and Lawless is a potential big group with unclear infrastructure.

Of course Factions in Alpha 8 - with the new Offline Protection system are in a different spotlight now, but I know that some big factions stay and fall together.

That’s it for today. Excited to see how the Supergates will be used in HWS 8!

Wow that PvP hotspot that cannot be instantly warped out of sounds a really clever idea… you can see player kill counts increasing!

Freelancer getting a mere 1/10th the RP as Alliance and 1/5th the amount of lawless seems super-nerfy.

I could see it broken into thirds, where alliance gets 3x, lawless 2x, freelancer 1x, but 10x, 5x, 1x? Hopefully freelancer gets some cool new unique things to balance this

Hopefully freelancer gets some cool new unique things to balance this

This is already the balance. Freelancer are leading the current meta by far.
But each Origin gets an additional balance syringe

Freelancers have enjoyed the benefits of PvP/PvE with the least riskier losss 300 pentaxid instead of 999 gold ingots or 77 AM cores. It’s a legit nerf IMO.

Seems I need a faction and Alliances for this time around…Anyone need a base builder? Someone that would have a resupply and repair location?

This sounds SO GOOD REXXUS!

Only one question: What if a faction has a freelancer AND lawless or something, is it based purely on the faction Origin or do all players have to have the same Origin for it to work?

Great question wondering that as well.

Chill, it’s a piece of a bigger puzzle regarding how the origins will work; we need more information and we’re clearly going to be getting it

Maybe freelancer need a nerf but with what rexxus said I see no reason to play freelancer. It’s overkill in my opinion but no big deal. I will just play alliance like everyone else will now.

Pirate life for me.

I know the tool now has an option to prevent Factions made up of different origins. Maybe Rex will be locking factions to same origins.

Only one question: What if a faction has a freelancer AND lawless or something, is it based purely on the faction Origin or do all players have to have the same Origin for it to work?

Each player is counted and calculated individually.
Everyone gets what his Origin is.

Maybe freelancer need a nerf but with what rexxus said I see no reason to play freelancer. It’s overkill in my opinion but no big deal. I will just play alliance like everyone else will now.

Glad to hear you value this change so dramatically. Just a hint thinking 2 steps ahead:
If “everyone” is playing Alliance and you kill each other you lose quite some RP — in the end maybe more than you would gain as Freelancer

So, about 31.5 million credits for playing Alliance in a huge faction for a season? Assuming you log on once a day?

I think he is referring to alliance killing alliance.

Never know at this point, could also be an RP penalty for all we know at the moment, or an additional RP cost for becoming unguilty.

I can see that since they gain so much maybe the balance is to lose it as easily as they get it.