our announced patch is now live!

But as I said we will observe for now how it turns out and only show warnings, just to be save. PLEASE report us the warnings so we can check if all is working as intended.

Additionally you have on PvP planets now 4 minutes a 3 warnings (total 12 minutes). 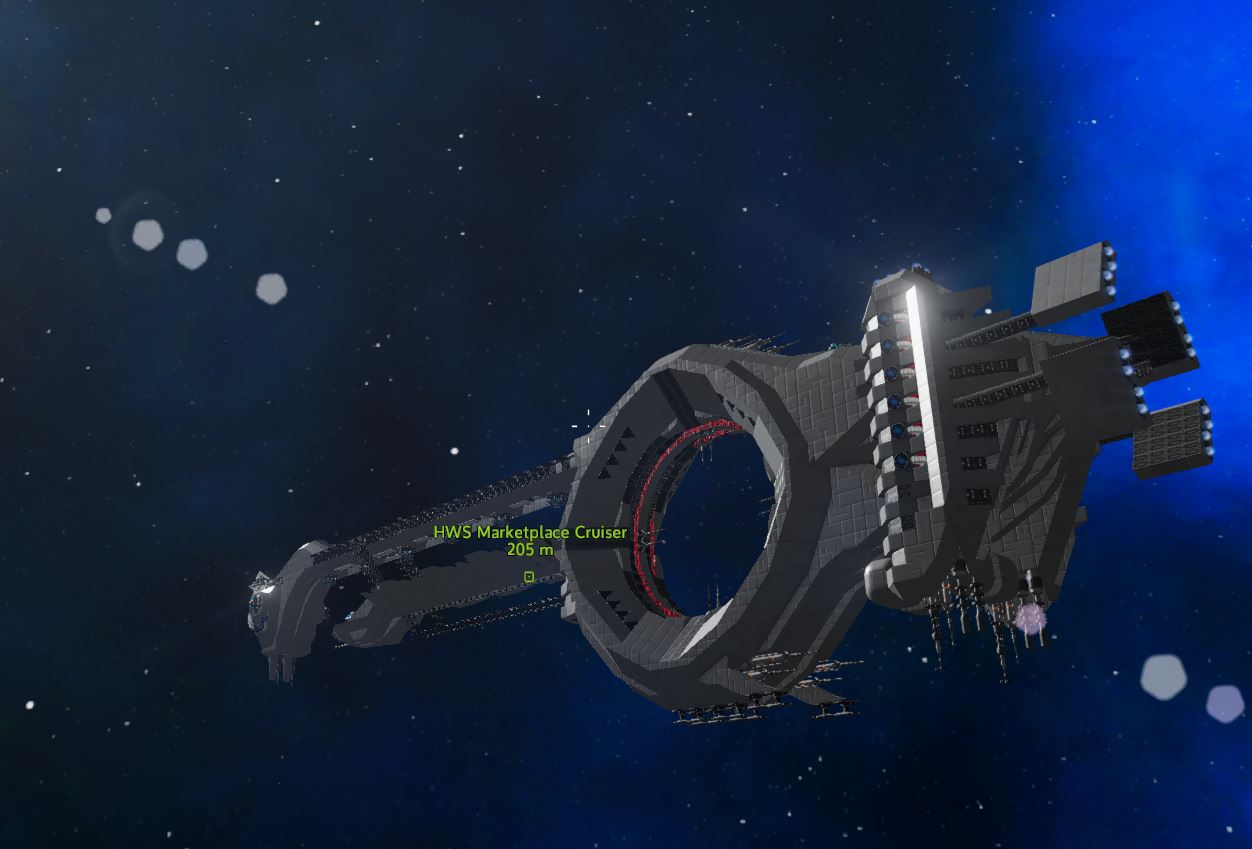 We have now the option to set a Mobile Marketplace for specific ships. Maybe a donation option for the future? Maybe a Freighter flying around in HWS 8.
For now a HWS Marketplace Cruiser will be sporadic jumping around from system to system with an Player Admin Core so you can see it on the map.

Info: you can use the ti:sell commands there or even sell / buy your ships around that Cruiser (in future flying Garage platforms maybe) 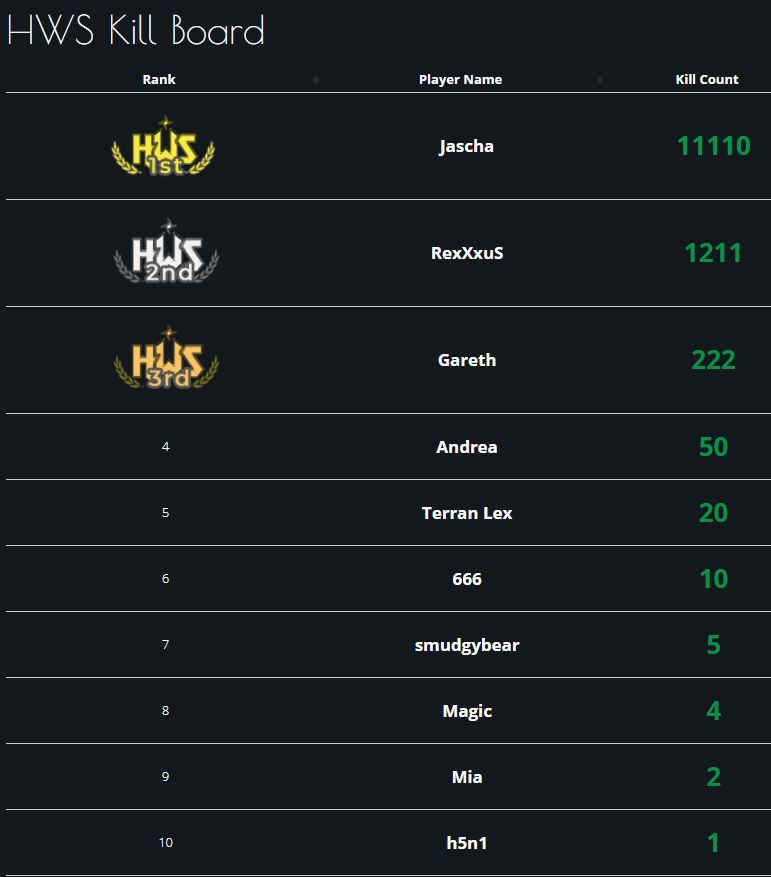 If you click in HWS Connect > Hunter Board you see at the bottom also the HWS Kill Board now.
It counts ONLY the player kills (no alliance and no faction kills) and only shows the Top 10 of the whole server.

It starts from today and gets updated on the web every 30 minutes.

At the end of a season I will reward the top 3!

I implemented in HWS Connect that you can stealth / un-stealth individual ships now as well! 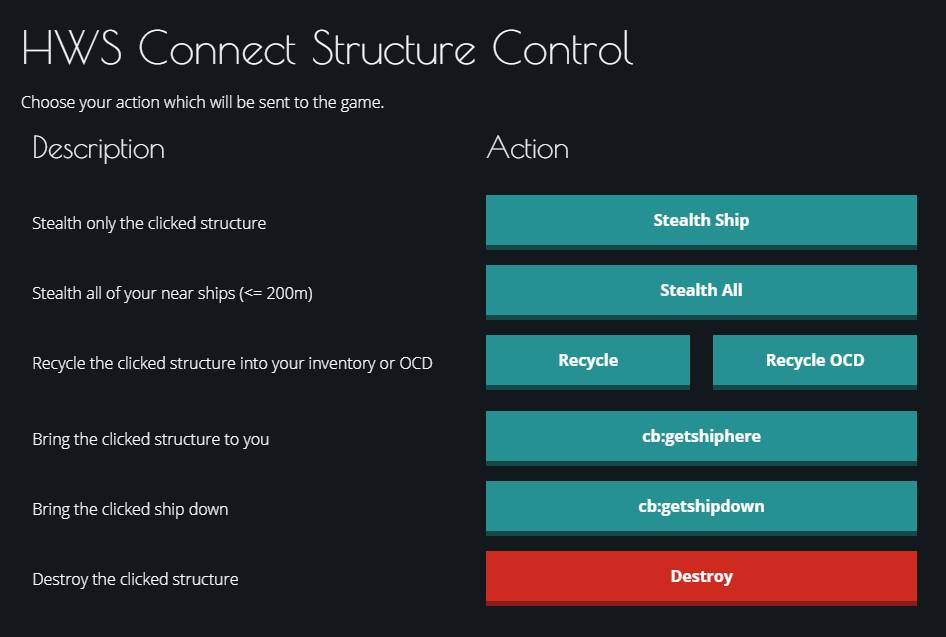 Faction members are considered as active if played within the last 7 days. Inactive players pay half of the taxes
Tax sinner (ignoring the tax couple of times in a row or switching their stuff to public) are paying the double amount of taxes

And don’t forget the event tomorrow!!

Hey @everyone, to overcome the wait for Alpha 8 / HWS 8 it might be good to have some Events from time to time! So here we go with a brand new one HWS Tank Rush Event It is pretty simple but will hopefully create tons of fun! [hws-tank-rush-event-1] Goal Your goal is to capture (replace the Alien Core with your core) and hold the big Tank Rush Tower in the middle of the battleground. Obviously it won’t be that easy… Conditions The battleground will be built within a large area and there are…

Could we see anywhere the actual limits?

Could we see anywhere the actual limits?

Or do you mean a pre calculated limit page, ready for your situation? So you don’t have to apply the factors above?

Would be nice if we could have a page where we can see our current limits and how many free slots we have.

We will see what we can do about that.

Great work admin. I really appreciate the conversion factor and the startin number, it seems well balanced althought it s only the first try. And is also great the specific stealth ship command, many many many RP points saved. TYVM

Also, this mobile marketplace, if on pvp spots, seems like just a camp fest. Will it be impossible to use guns around it or is it just a camp area?

The Cruiser itself does not shoot. What you do around that ship is up to you.

Kill board!!! - I’d have been happy just for that from this update

Just a pity its not retrospective lol.

Does the kill count record multiple kills of the same player? I think it should as often players respawn grab another ship and come at you again. However, is there anything in place to stop those multi-cheaters killing their multis over and over?

That is the new discussed and requested base number feature.

A faction can have 5 faction structures and then on top of that the factor you see in the middle.

Does the kill count record multiple kills of the same player? I think it should as often players respawn grab another ship and come at you again. However, is there anything in place to stop those multi-cheaters killing their multis over and over?

Yes, it records multiple and obviously we can’t prevent multi account abuse. Well kind of, if we see there are some lovey dovey killing each other all the time.

Yes the berechnete limit with all factors. How much cvs the faction actual could have ? The grenzen halt there the warning would geschickt werden