a lot of people woke up with some debts / taxes in their bank!

Was it a surprise? Yes and No.

However in previous announcements I said that all lower PvE playfields except the Peacekeeper Orbits are gonna be taxed IF 200 Cores are reached!

I also have setup the playfields that way obviously and everything I set up is transparent to you in HWS Connect, under the Universe tab. 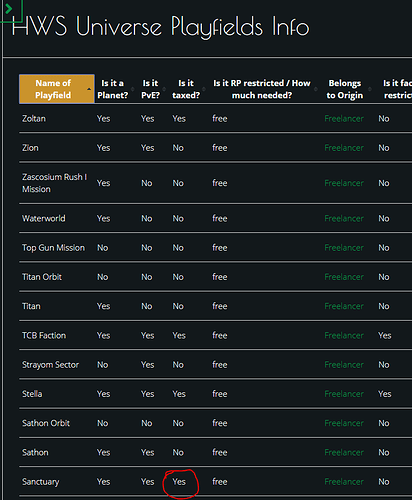 But since this is hidden, not all of you are using HWS Connect it was clearly my fault to not have provided the Tax information in the Planet description in time.
(because I was burned out from the Alpha 8 release etc. etc. nobody cares, I know)

So I spent couple of hours this morning to refund players with million of debts on both servers because of my mistake.
I’m sure I didn’t get everyone covered so

Check before though if you didn’t get the money already with eb:info.

I was also generous and set the Debts to Zero for People on the HQ planets with million of debts.
The info for these planets were there for long time and it wasn’t necessary for me to do but just as an one time service.

Overall you realized that Taxes are REAL, in case you care about your credits. It’s not a joke and should be taken seriously.

Players joining to HWS are infinite but the place we have is finite!

We must take care of the places we have. This is not Minecraft where you can just fly / run somewhere and it’s a new place you created procedural.
That means couple of things obviously:

Taxes on HWS are more than 1 year old and our way to deal with overpopulation — nothing new. But of course a good reason to rage quit, we understand this and we wish the quitter all the best.
But Taxes are especially one thing: a direct confrontation with reading and understanding the HWS gameplay and try to learn it. Taxes is about fairness for everyone, especially new player.

Of course there is room for improvements and we are open to it.
I just wanted to clarify some things because we have gained so many new players with Alpha 8.
Thanks for reading.

Even though i just had to pay 500k for a small ship i forgot on ECC. Without taxes most PvE planets would be waayy too full, and laggy. Imagine how ECC would turn into a big parkinglot.

And ---- many do care. Dont burn out in rl over play money, or anything else.

I am with SwissSteel1 it may seem like many do not care but well that is human nature and more sadly American nature to act like we do not care. In the end many are grateful for your hard Rexxus then let on. As I have said before this is the main reason I try to be in Discord to help people with questions I can answer.

I would suggest maybe if it can be done do the samething with taxes you did with help. Make it so if someone asks about taxes we can type Taxes in Discord and it links them straight here. This way we (vets) are not telling them anything even slightly incorrect.

Some will laugh and EU people may not get this reference to an old Cartoon when cartoons were worth watching. “Knowing is have the battle”. I will give you …well nothing if you name that cartoon. Bonus if you are under 30 and know that. LMAO. Hint was a big hit in the 80’s but the figures were exspensive.
LOL

Players joining to HWS are infinite but the place we have is finite !

heh Orginal GI Joe cartoons. And you got a typo, It’s “And knowing is HALF the battle!”

Well… i do see what you mean by refunding they who was on a planet with no information ingame… But with the planets already marked tax if over 200 cores, why not let them just pay their taxes?

Maybe the vets could be a bit more strict also? I love to help people, but “what is ocd, where do i sell stuff” Maybe we should say, press F1 or go to connect.hws.global? This way they may start reading all the other stuff as well…

btw… Was there an unscheduled surface wipe on freelancer hq today?

So peacekeepers will be taxed anyway? even if there are less then 200 cores?

all Canadians here care you ya bro and appreciate what you do , this server would be like any other crappy empyrion server without what you do (i think i worded that right ). So take it all in and bast in your glory thats is HWS (and get some rest and get those garage ships in

Here Here.
Been around since 2016 on and off, this is the only server ill play, I feel for Rex as he just gets all the work from newbs not reading up.
Keep up the great work