Since you left out the reason why you need me I guess you know already what happened.

I got a report that you are breaking the rules with your high tech SVs regarding legit building.

I checked it and indeed your guns can shoot through the triangles. That is a huge regression since I know that this wasn’t possible in Alpha 2-3 at least.

It is a massive advantage above others who build their ships legally with open ways to the guns / chassis.

I seized your ship as a warning and can give them back to you if you rebuild them and all the others your faction fly.

Also a reminder and warning: we expect from you that you report such exploits without our intervention

So this is illegal? 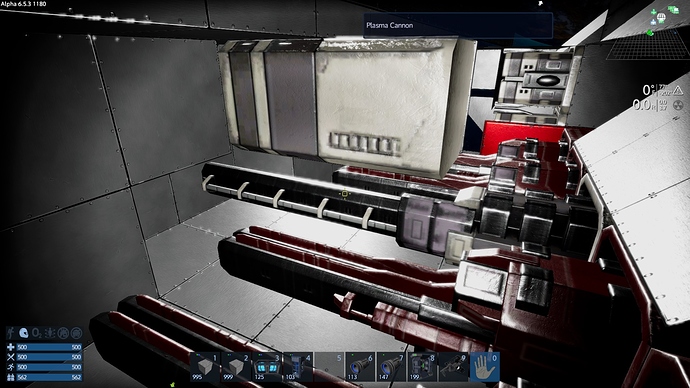 And this is legal? 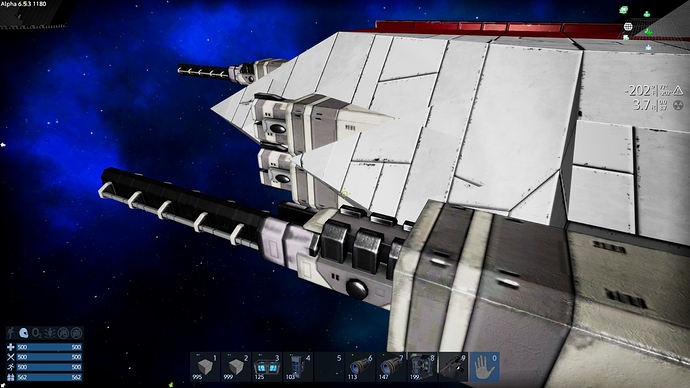 So this is illegal?

yes. What ship is it? Where is it?

And this is legal?

yes. What ship is it? Where is it?

Okay thanks for the reply. Thats the ship i used in homeworld planet. The last picture is the workshop ship before i modified it to make it look like the first picture.

OK for my (and I have no doubt others!) absolute clarity, I have the made the following two examples in creative, RexXxus - would you be OK to confirm the legitimacy (or not) of both techniques?

Recessed weapons. Mounted inside the body of the vessel, with a clear path to the front. 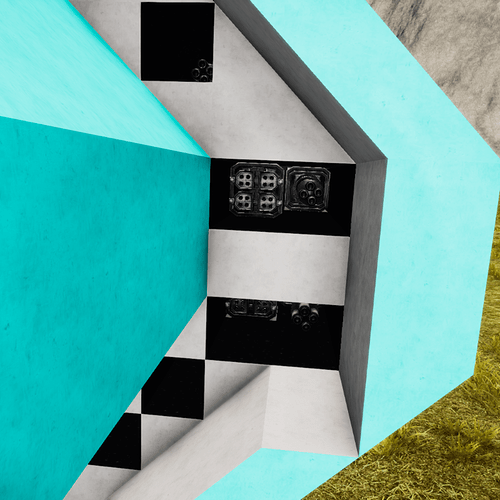 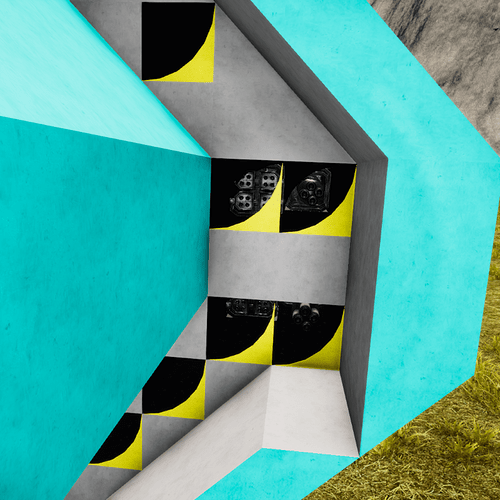 Whilst both approaches do not fire through blocks, I would like to be sure if they are considered legitimate or not. Especially before we start working on T1 designs for the HWS 6.X.X.

On a constructors note: There is downside for the vessel in these techniques as side ways movement often will cause rounds/missile to not exit the vessel, so this is NOT a “no brainer” approach to building - but it is very good for POI busters where you fly straight in and then out again (sniping).

Both examples are totally fine.

Second example it is the same like it inside the ship. In fight when SV is moving game “logic” think it weapons cover by blocks.

@RexXxuS have you ever considered making a rule that “distraction” guns need to be inoperable? Mostly thinking of SV’s here, we use gatling guns to draw fire to parts of the ship that are not important, and just never load ammo into the things. I havent tested putting the guns backwards on sv’s, but I know that if you do it on cv’s, it makes them effectively useless, and ensures that there is no way they could be firing through blocks. Might be the easiest way to differentiate on sight from distraction or decoy weapons, and those intended to exploit and fire through blocks.

It’s not an exploit, the devs themselves explained somewhere in 4.0 this “feature” was added to prevent projectile collisions with your own vessel. There is nothing to report.

Nothing to report, that your guns magically shoot through some sort of 1 way glass made out of steel? Way to try to bend some sort of patch note involving preventing sv’s from shooting themselves to pieces to mean that you are correct.

I remember reading hummel explaining you can shoot through 1-2 blocks with projectiles weapons in an experimental version to prevent collisions, somewhere in 4.0, I’m lazy but I’ll try to find it.
It’s possible since build 648. http://empyriononline.com/threads/alpha-experimental-4-0-build-648.7683/

A lot of players use these distraction guns. I’m not a builder but I believe this building tactic is used
in every vessel by all the best builders. Unless there is actual evidence of these guns firing in
PvP or PvE they are simply there as dummy guns. before any accusations of exploiting one should
consider the guns being buried are the worthless ones. The accuser needs to provide evidence that
the guns were used. Them being there is not reason enough to make accusations.

@mcprouty I believe builders are now turning the guns sideways so they don’t appear on hot bar.

@chobo sorry mate spent good portion of yesterday arguing with Rex as he accused Op4 of
exploiting claiming this was why we always win. Yet anyone who has actually fought us knows
we only use rockets in our SVs. And their faces are fully exposed. The other available weapons
are currently worthless in a PvP fight/duel. Have been for some time. NO ONE is getting an
unfair advantage by burying these guns. The idea they might is laughable.

Thats why I suggested making it a rule that they have to be pointed the wrong way. That way there is no confusion, or claims that “oh yes it is an exploit, but I didnt use it”. Pointed backwards, they cannot be used. Problem solved

Currently our builders are turning them sideways. They wont appear on hot bar that was as well.

I’m aware of this “feature” since 4.0 and never found it useful, your “hidden” weapons are still lockable and in range of aoe damage, you can’t go through severals layers of blocks, what I found when I tried it after reading the patch note is hit reg weapons (mg, laser) can’t be used if burried, only projectiles (rockets, plasma maybe railgun) can go though 1 block.

I get the general idea, but I do feel that this sort of concept is not clearly definable in such a way as to be able to make a rule.

In the specific example Gatling guns are quoted, now in many SV builds I currently use (and most default/workshop builds), Gatling Guns are used and to me, as long as the guns are in a position they can legitimately fire from (per RexXxus ruling) then how can they be called a distraction?

For me I want every possible weapon on an SV (or any vehicle) be able to fire! I certainly load ammo for all types (spread across the ammo boxes of course!).

If my ammo boxes get destroyed or I run out of ammo, I still do not consider my weapons to now be decoys - just out of ammo until I have the opportunity to refill them.

Which is why, unless I am missing something, I think a rule on decoy weapons is not practical to implement.

Decoy weapons here references forward firing weapons, which are targetted by turrets AND hidden behind isolating armor. Never intended to fire, only to draw fire toward that area, if built right. If you dont use em, all guns are targets, and they should all need to be open to the front. This is specifically regarding the legitimate use of buried guns that DO NOT fire. Dont want someone to walk up and say oh these targets here have guns buried inside, and not be able to conclusively say that they cannot be used to exploit fire without being destroyable.

Short version: If it is buried and not exposed to the front, it needs to be facing wrong way, and thus inoperable.

I am a builder, and I use distraction guns, but they are BURIED deep behind lots of blocks, its 100% pointless to build distraction guns with 1 block of armor, the weapon would serve more purpose firing any measly damage at that point.

Proper distraction built turrets could never hope to fire through so many layers of armor.