it’s time again for our ritual…

As always we take this opportunity to go to our big major HWS version — even though it means that our run time of HWS 7.X.X season was not 3 month by then, but almost (end would have been the 17.06.).

Common question and the general answer can be found

But with HWS 8 we also wipe additional things because the game changed in a bigger scale. This was already announced but just a reminder again:

So you get some credits back for your OCD content and can enjoy to farm it properly again.

I am still in the middle of progress… can’t share much but some insights — known and not known:

Last but not least three notes:

I’m in a hurry again, sadly can’t make it more “catchy” but just hope all will be cool in HWS 8! Trying my best!
Stay tuned…

I laughed my ass off on the camping, hoarding, hugging. Too funny.

Ah taco no fair I wanted to be first

No matter what you do Rexxus your true fans will enjoy HWS 8. I have yet to find another server that can compare to HWS. I can not believe that I did not get hooked on HWS before 6. Just remember Rex there is still a world out there so go get some sunlight for 5 minutes a day. LOL. I hope you see that as the joke it is meant to be. See you in 8 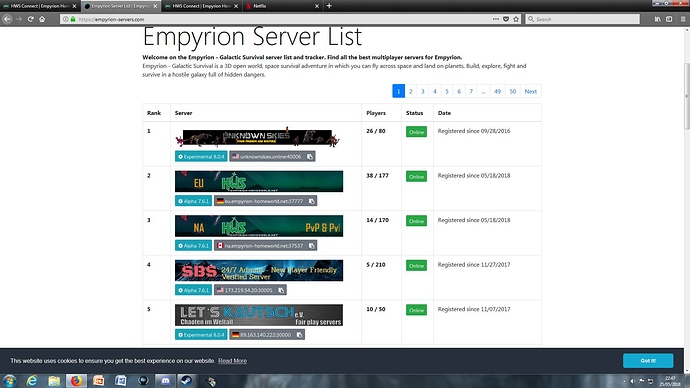 If people keep voting for HWS regularly then we might be Server number 1 pre-8.0!

That’ll be great as it’ll bring in a flood of recurring players to HWS!

Common question and the general answer can be found

But with HWS 8 we also wipe additional things because the game changed in a bigger scale. This was already announced but just a reminder again:

So you get some credits back for your OCD content and can enjoy to farm it properly again.

I’ve heard rumors of saplings and vegetables themselves not transferring to the next season too due to changes in 8.0. Is that true or just a rumor? I want to make sure so I can optimize my OCD.

Dont know about carry over but they can definitely no longer be pre-placed in your blueprints.

“Gold hoarding was the brother of boredom” will be my new mantra.
Thanks for the update on what will not be carried over.

I didn’t hoard that much gold. Actually spent about 90% of it.

No Epic weapons can be crafted again

hopefully they will be repairable then.

I use my gold to pay my alliance kill fines. Has cost me 8 mill this season so far. RP to cred conversion should cover most of it as I too avoid mining.

I had to get the ever-elusive OCD7, to support my hoarding habits. 70000 of one item per slot, isn’t enough.

Supergates will be your new travel system around the universe

If your saying normal warp drives/system are being replaced with this object. That means no one can just warp jump from any location to a system. Meaning if you are being chased, you better run to the nearest gate.

This also means people can use camp weapon satellite bases better. As long as the exit point from one of these super gates are not static. Unless you also give each gate like a 2-5km diameter “no build zone” bubble around the gate. Then all is fine so that no one can drop bases on these new gates.

Language… I didn’t mean “replace” even though this would create such a dynamic you are talking about.

In fact it is an addition. Not only for Prototype guys to take their ships with them this time but also for shortcuts here and there.

You have to reach the Supergate zone, yes. But the zone is a random drop off / or take away zone. So in PvP it will be quite big to don’t make warp camps that easy happen.
The anti Grief zone isn’t that high in space so I guess the don’t camp rule has to be extended a bit.
We will see.

Yea no problem Rexx, just that to us “your new travel system” at least for me meant that : ). You know me, I like building things in places people did not expect lol.

my bad. I’m in a rush at the moment

It is a brand new big feature and we see first how it goes, hence the warp is free, no cost doing it.
Excited to see how all turns out

hey @RexXxuS i was thinking about the congestion on the Origin HQ planets and how you were saying people were not spreading out to the other PVE planets.

Would setting RP cap on the HQ planets be a feasible solution?
for example: Alliance HQ would be capped at a 100 RP, once a player has reached that cap they have a timer similar to the Starter planet where they had 7 days to move or lose their cores.

That is an interesting idea. It is only missing the “counter part”. The motivator to earn a lot of RP. Otherwise everyone is happy to not collect RP anymore.

While I made RP dramatically more gameplay relevant for HWS 8, the bigger thrill (why) to earn them is still missing I guess. Beside buying stuff with it, entering planets, etc.

Maybe RP can also be used to determine the number of assets on HQ planets, but in reverse. Low RP less than 100 you could have say 5 cores, every 20 more you get 1 less, to a max of 1.

Or maybe have allowed a 1 size larger BP on a restricted play field for X number of minutes.

Or conversion for 1 time discounts at the garage.

The only thing that would bother me is that the RP would be too easily received for freelancer, 300 Pentax is nothing to lose compared to 999 ingots or 77 AM cores, it’s weighted heavily in that favor.