I have been here some months now but still only know a fraction about pvp in HWS.

When i finally made a pvp sv as a pve player who wanted to get his foot in the door in pvp, I headed up north to the pvp side of galaxy but found i needed a cv to transport my sv to pvp area,
instantly I felt like i was held back, it was an inconvenience, no idea what supergates were about at that point or where they go and if you can return through them all or can i blocked from returning etc nobody wants to have to build and risk a cv also just to go and lose a sv for fun.

I did not want to discuss the matter in global and ask questions as that would have revealed my pvp intentions to those in the server who were not expecting it from me.

Element of surprise after all is an advantage, if someone you know to be a boat building PvE noob suddenly comes out of nowhere and pummels the shit out of you or at least dies giving it a good go in a custom built pvp sv, and your a top pvp player, that will be a nice surprise for you

So anyway I built the CV also but reached a state of thinking where i figured whats the point in building a pvp cv to drag my sv to a place and probably loose both lol.
I was then going to make a tiny cv carrier thing for pvp sv but got sidetracked with updates etc

It is no wonder there is little play in pvp from the regular pve group.

We need to know:
how to access pvp areas by sv only.
how to use supergates to access pvp and which supergates.
The obvious dangers.
Also remind players they can pvp on their origin factions HQ moon ( i only found this out last night)

I really think we need an in server tutorial for pvp that can be started with a command or the PDA which would also explain the usefulness of the sethome and gohome commands in conjunction with pvp.
Or perhaps the command can just point users to a thread here though I think PDA entries are probably best.

PvP would look like a more fun option to explore I think.
And pve players would be more likely to come and have some skirmishes if they all knew they could just take a sv and teleport right back to their home doorstep afterwards.

I believe a lot of general PvE players would enjoy a pvp skirmish if they knew more about the above mentioned items, a fair and quick access tutorial explaining the concepts of HWS PvP would be a promoter for PvE players to want to try it out more often. And would further inspire new players to try PvP having more knowledge of the subject.

I have still yet to have a battle in HWS and in actual fact, the pvp cv and sv I had built recently ready for the occasion have seemingly vanished from the server

That’s probably because they sat rotting in mothballs for 2 weeks while i was unsure about how and where to access pvp more easily with a sv and so went onto other projects such as building PvE sv lol.

We could probably do with a quest that tells you to fly to a pvp area and land at least 1 hit on a fellow player to complete.

This way players can be cheeky, find someone in pvp give a quick hit and hopefully warp out quickly

This hands down would make or break PvP for a lot of people. Understand how to go into it properly without getting killed 5 times to find something out is helpful. Also most PvPers coming into HWS probably don’t care to read much, so a PDA mission to help them with the basics makes more sense then trying a guide so.

I have tried to put a list together here to show the differences between a pvp pro and a guy who just bought emp yesterday.
This list is mostly reference to PvP ship battles.
Please feel free to mention anything I should addd.

Pro PvP players currently have adapted and learned over time the following skillsets and probably more I have not mentioned.

The random new players have the following disadvantages.

A HWS ship PvP tutorial needs the following explanations.
When someone asks in server " hey how do i do pvp " and this player is new to empyrion, I want to refer them to a single forum post containing all the following information, or even a PDA page.

The idea to boost PvP with knowledge transfer is great.
There is soon something coming about this

And ingame wise it’s planned for sure to have a POI, showing the EWS guide in more detail for example. Deathmatches could boost it too.

If there is anything I can do to help buddy, I got free time every day.
I spend most of it in server just staring at the beautiful vistas of atlantis, and sailing lol

There is nothing so taxing about my gameplay that I cannot help you out in some way at any given time so let me know if anything comes up, I would love to have a hand in helping the server evolve.

I am definitely with you on the PvP travel issue. I’m also mainly a PvE’r, but wouldn’t mind exploring more of the PvP side of the game. I don’t fully understand the supergate system. And I don’t see the point to take time to build a CV just to get into a PvP zone and then lose both before I can even undock my SV! If I can’t easily understand how to get there without losing a CVs worth of resources, what’s the point of checking it out?

Maybe I’ve missed it and will eventually come across it as I check out more and more information on the HWS website. But a detailed description/map of the supergate system would be a big help for just jumping in with only my PvP SV. Or should I say my attempted PvP SV… LOL

Thank you for your feedback on the PvP guide, if you’d like to fully understand the supergate system, please look at HWS PvP Tactics & Layout Chapter 2 Subsection 1. That will detail everything you need to know about supergates. If you’re having difficulty evading other players, might I suggest subsections 2 & 3 as well, from chapter 2.

I read the HWS PvP Tactics & Layout, Chapter 2 Subsection 1. I’m more of a visual learner. I’m talking about having an actual map of the Supergate System. I just started working on one. This is what I’m looking for (I hope it displays correctly): 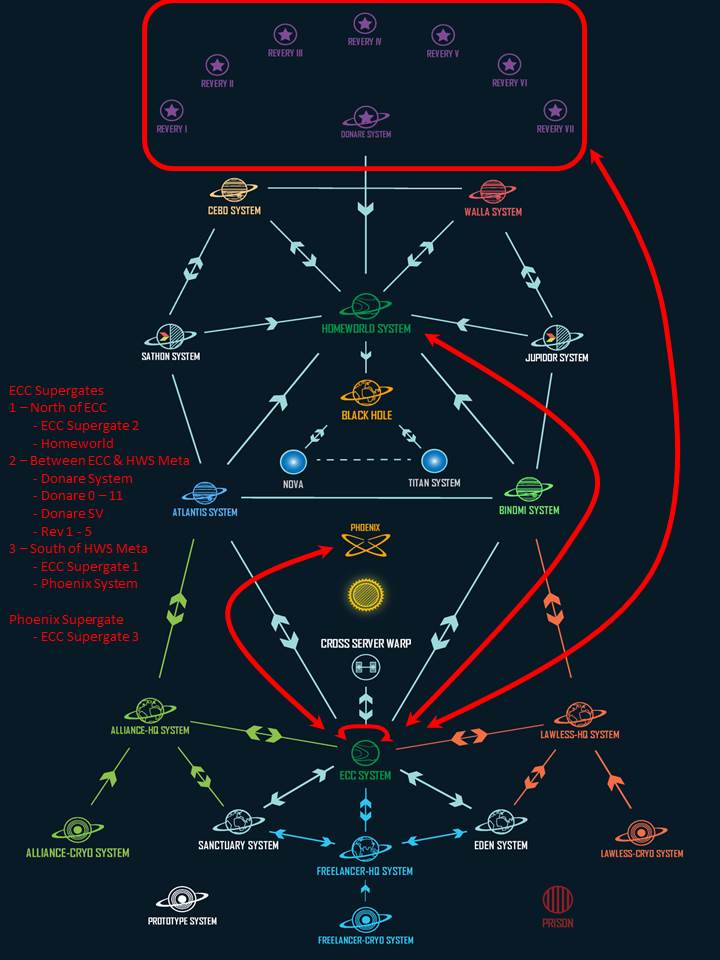 all pvp systems have supergates

Because I’m trying to create a map so I can figure out which zones are linked via supergates so I can travel more efficiently between zones (and not require a CV to do it).

Sort of correct, yes! All gates below black hole can directly link to HW as far as I am aware. Don’t forget other systems!

I’ll see what I can do about making a more visual map for people!

I’m about 1/2 way done with a map. I’m hoping to finish it this weekend.

Mapping within the game is complete. I just have to finish drawing it out on the map. I should be done by the end of the weekend.

Thanks everybody here, shows that the PvP community has good people willign to share info and help others.

Some good info here maps etc, thank you all.
Much love.

The draft version of the map is DONE! I’m getting back into the game right now to double check on what I had down for 3 supergates to ensure I didn’t mess those up. I have also noticed that some of the coordinates on the supergate chart are incorrect. So that is the last thing I want to add to the map is the actual coordinates. I will post the map for everyone on Sunday, NA time.

The Supergate Warp Map is complete! I didn’t think I would finish it before I went to bed, but here it is! I tried to be pretty thorough and accurate. Please let me know of any mistakes, or additions that I didn’t have access to. If you can’t zoom in here, try downloading it to view it better.

I really, really appreciate content the Community is doing! Thanks for providing it!
I would like to implement the final version to the Guide here:

[HWS-Supergates] To enhance the HWS Universe gameplay we have implemented Supergates. They give you the option to transport from A to B even with your (docked) ship(s). Just keep in mind that ONLY the pilot should use the sg:warp command and not the Passengers! The Supergate Locations Name Command Coordinates Atlantis System sg:warp:at 0, 7000, 0 Atlantis System (Only SV) sg:warp:at-sv 0, -7000, 0 Binomi System sg:warp:bi 0, 7000, 0 Binomi System (Only SV) sg:warp:bi-sv 0, …

The Supergates on Jupidor were even set to the wrong System (Sanctuary).

Overall some notes now (you can verify better too):

Great fundament we can build on top though!

Wooow! Great map my dude!
Would you like me to add it to the pvp guide?

It’s been a long day here. Let me make those changes by RexXxus and then it should be good to post. I should have it done later tonight (NA Central time).