after the furious first HWS 9 Teaser we are coming to the second big one!

As it got already teasered there will be a new way to play on HWS with Alpha 9.
It will affect both PvP and PvE to a certain degree. It pushes slowly the mentioned direction Empyrion is going towards “MMO”.

I want to utilize our Story and make more out of it. Giving you more depth and hopefully fun in your given Origin to create a dynamic gameplay.
The only little issue: our Reputation word got grabbed and it might confuse some players along the way. Please “re-learn” the differentiation of “HWS Reputation Points” and the “Faction/NPC Reputation Points”!

As you can see in the teaser Screenshot: each Origin has it’s default standing with one of the NPC factions at the beginning. But be careful, depending on your actions you can lose this standing.

This will not only mean the NPC Trader won’t talk to you anymore but also that Turrets on the Trading Stations will shoot at you!
Re-learn here as well to pro-actively check your map and what Faction owns that POI — before you get shot to pieces!

If you press TAB and go to the Factions tab at the top, you see your
Reputation Points for the 3 NPC Factions.
Each Origin on HWS has a base line Reputation towards them.

Choose your Origin wisely and think about your actions along the way!

The HWS universe is waiting for you and what decision you will take! 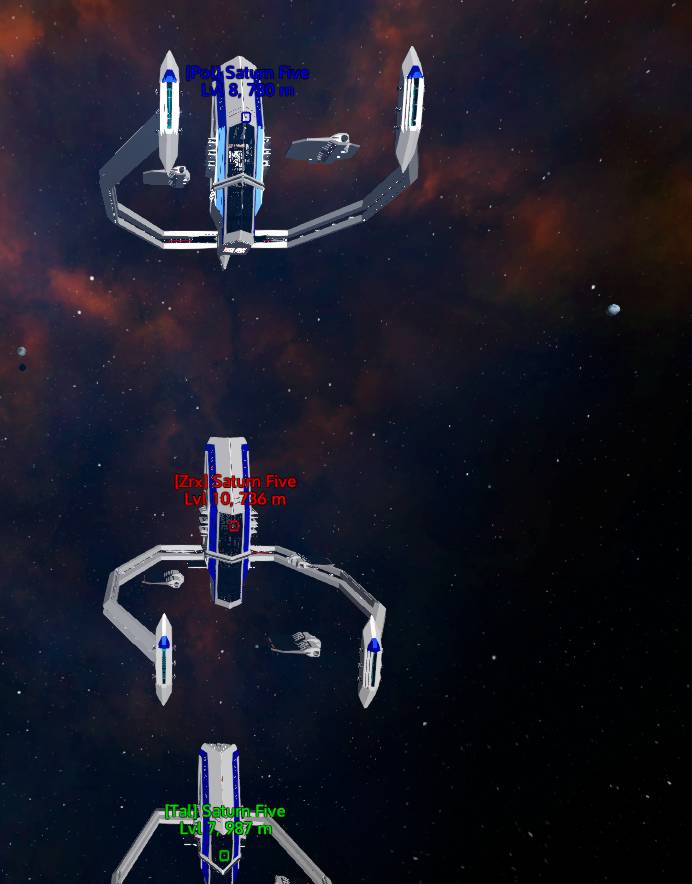 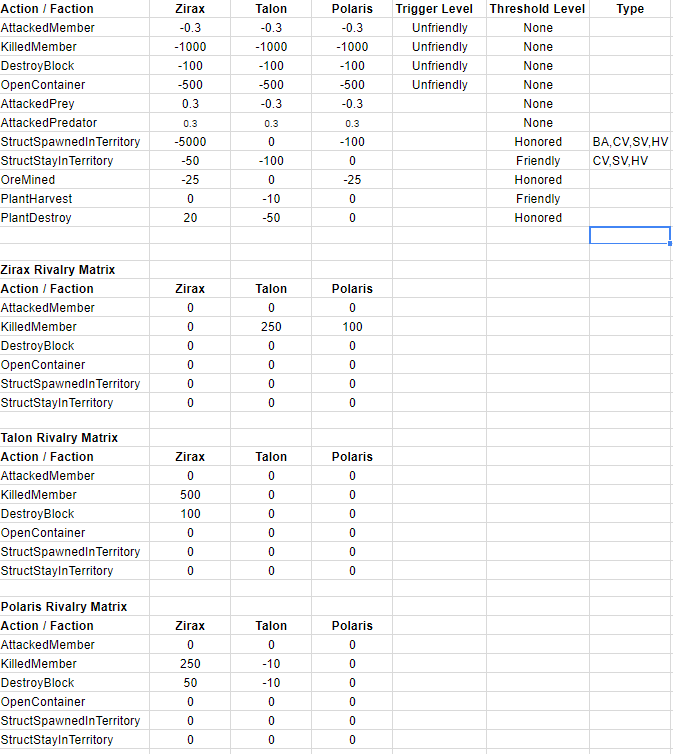 How the detailed Rivalry works etc. will be coming into the Guide as well.
Just a quick example: if you kill a Faction member, you get automatically Unfriendly and lose 1000 RP.


Overall, the travel routes you want to fly are very specific now. And PvP does not mean automatically the end of PvE guys!

What if you don’t want to bother with some rivalry matrix and just want to “play your game”?
I got you! Look out for the dedicated NPC Faction Mission Dealer shown above in the screenshot.

Some Missions are only shown if you got the needed NPC Reputation Points. Some will help you to get a better standing. Some will force a decision from you, to whom “you belong”, etc.

Always remember though: each HWS Origin has it’s “favor” towards their base NPC Faction. And you earn in the end the profit out of this favor / “ally”.

Final Note: This gameplay / idea is way bigger than my head is ready yet and even bigger regarding the time I could spent on that! With your feedback I want to fulfill my known plan to have “Singleplayer” inside of “Multiplayer”. Awesome stuff is possible here!

Same as the Elemental Bank, I want to have a baseline of level 10 features in HWS (even though it is not HWS 10… at least something for EGS Recycle as reserve)
So here is my idea of the future of OCD.

Note: OCD in its own is a permanent feature. Not like the EB where the levels reset after each full wipe. Maybe that will change in the future but for now and from the past, OCD is your very personal end-game content to dream about / achieve. Especially not in one season possible, but motivating you to get it after couple of season.

Edit: I went back to the drawing board and redefined OCD. Implemented Categories, made it much more lucrative for beginner but giving veterans and motivated players later on a much better experience on HWS!

Note: This will allow us to implement the Prestige OCD idea on a later stage

Possible to use OCD from any PvE Zone (Starter etc. excluded of course)!

Possible to use OCD from any PvE Zone (Starter etc. excluded of course)!

=> No Cooldown in PvP anymore for all Origins

Another requested feature might get into HWS 9 as well.
Similar to EB only Faction Admins and Owner can get stuff out of the OCD but members can only put stuff inside.
Make sure who you trust in your faction (I told Eleon to implement more faction permission levels!)
Same as EB again, the Faction OCD wipes with a full wipe.
Both new features should help temporary to organize a “Project” together.

Please let me know your feedback!

That’s it for the second HWS 9 Teaser combined with the release of EXP.
As you know this means the release of Alpha 9 is almost there — probably next week, which brings back our Ritual

Prepare for the full wipe everyone!

Once Alpha 9 is out we are forced to full wipe as well.
Don’t ask me how I should finish everything I have planned for HWS and the official Eleon servers

I plan to release a third and final teaser about the Universe, HWS Survey results and Origin rebalancement changes — affected by the new gameplay I mentioned above.

Hey RexXxus. loads of changes and we have to stay on our toes. I have a few questions.
1)i have ocd 6 with gold ingots in it. what will hapen to those soz ingots is now for 7
2) Cant we make the faction OCD and bank a more perma thing. Gives a great reason to stick with faction and make it grow as to rather 1 man it?

I have a question though? You say epics won’t be removed from ocd. How about the rest of the stuff(Auto miner cores, gold ingots…)?

What happens to the gold ingots in our ocd6’s if we are only half way to ocd7? Combined with the eb changes I would not be able to reach ocd7 and would essentially lose all my hard earned gold

1)i have ocd 6 with gold ingots in it. what will hapen to those soz ingots is now for 7

They stay. All good. The changes coming only for HWS 9.

How about the rest of the stuff(Auto miner cores, gold ingots…)?

It’s christmas… no other wipe.

Would love to, but factions wipe/change each season. So I have no fixed key/name to save it.
Player is easy because your steam Id never changes. But factions are fresh each season

How about a special made OCD/EB, which the personal player can create(not ingame faction), and then you can choose a player to share it with. This way you Can do this. It just can’t be connected with ingame faction.

and 1 Billion Credits for it uff …

Only 2k RP? Hmm. I’ve been pretty inactive this season and i’ve got 3k+ just from voting, and faction bonus and stuff. Being active i imagine 5k or so would be possible.

What i mean I play for FUN ! not for Working -.- … and if its not make fun anymore (run for rp as like lifework) no thanks

Games should be fun and not become a life task.

To store what lvl 6 does today ---- requires lvl 9 going forward.

In the overall framework of what you have planned ---- how much effort, and how realististic is that for the average player?

Obtaining current ocd 7 at 700m is out of reach for many. The new numbers ----- I cannot even begin to comprehend, and that required to stay even.

In general, please consider you may be moving a bit too fast with the degree of changes you have planned for 9. Especially with eleon offering so little in 9 as an incentive to encourage continued egs game play.

Ask yourself the question ---- does what I plan to do encourage gameplay on hws? Only you can judge.

the mentioned direction Empyrion is going towards “MMO”.

was this an announcement from eleon, or is this where you want to take HWS?
because MMOs are notoriously awful at making people slave grind to achieve very minor improvements.
I think we are already at a good balance of play & grind.
OCD is what differentiates HWS from all other servers, its a prime staple that keeps bringing people back. Its the glue that holds all that work we’ve done before to the next season.
making adjustments to the current structure in such a way that we will now need to grind out another year just to get what we already have (ocd 6, ocd 7) is not something we need. sure you have your handful of players that figured out how to get ocd 7 in a season, the majority have not.
i am literally within reach of ocd 7, and i know i wont earn it before the 12th, unless i get miracle credits.
and now you want to change the entire system to mean all my work is now worthless.
I’ve been here since Season 4.

also by removing gold ingots from ocd 6, what can people hold that will buy ocd 7?

I like the fact that the OCD can have more levels now! Once again this is a feature based on a previous discussion.

I think the bit folks are having issues with are what you can keep at what levels (I for one am at OCD7 and have a LOT of autominer cores mwahaha, but I understand where you’re going with this.)

My only quesition is say i’m AFK for the end of 9 and still have cores in my OCD, will they just be deleted/carry over/ or will I be compensated for them and they will be deleted? Just a curious question!

Answered above, you will keep them.

Looks good, something to work hard for. But also agree with the loss of gold ingots in ocd 6. Remember that the step from ocd6 to ocd7 is huge… for 90% of the players it is impossible to get that much in one season. And if we have to remove all the other stuff just to place the gold?
I would keep the ocd 6 and gold ingots . Rest of it looks good

Personally I’m okay with the changes overall. The max level OCD should be something that only a handful of try harders are able to achieve. But gives the rest of us something to work towards and yearn towards.

My biggest critique of the proposed system is not being able to hold gold ingots until lvl 7. The reason is because it is such a huge jump credit wise from 6 to 7 that the ingot storage is a must. Yes some can get it in 1 season that that is a minority for sure.

As far as cores and epics not being held till higher levels I’m okay with that. They are easy to get so doesn’t truly impact anything there imo.

The rep costs on top of the credit costs is pretty massive, but I’m expecting more ways to earn rp to help even that out. You should have to work for enough rp but not spend an entire season rp farming for an upgrade.

wise ---- we have had some really good conversation in the past over the seasons.

But — your take on this is really puzzling to me.

The 2 major changes in the works — eb and now ocd, are nerf’s for the average, long term player and supporter of hws.

I’m just not getting any ‘warm and fuzzies’ where this is headed.

Take that, combined with eleon’s lack of changes meaningful to mp pvp — and well… discouraging.