today I start with the series “Teaser Countdown” — releasing each day a new Teaser for HWS 8 until the release. I try to cluster some things, spoil as good as possible while still granting you some surprises on the release day!
Today we start with 2 big things: 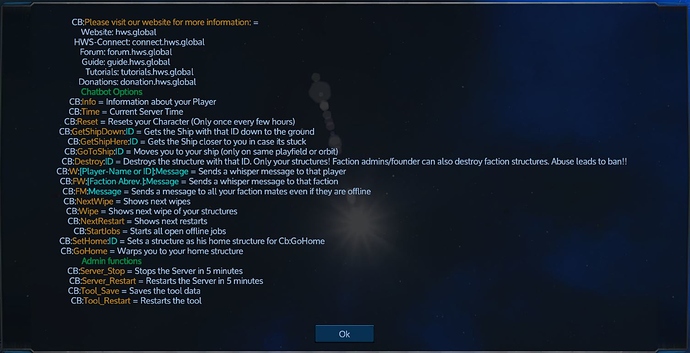 Here you can not only see a new feature to whisper to another faction but also the overall change regarding our chat outputs.

This not only improves the performance drastically but also is an easier way for you to make screenshots of that popup to help us in Get Support requests or for your archieve.
The current version has the advantage to have a kind of history for you but since the chat system in the game isn’t “ready” yet, it was quite fiddling.

This popup above can be closed with the Enter key as well.
But there is more you can do:

We also have a confirmation window for some interactions now. Finally this cb:yes / cb:no typing is over and fits in the workflow with our HWS Connect Button integration. As you can see you can accept / decline such popups logically with the Enter or ESC key as well.

As mentioned elsewhere we not only tackle the current (trickster) mechanic to sell stuff globally (with a 10% fee) to have a nerfed OCD along the way, but also update the general gameplay of the HWS Marketplace.

You can buy items globally from the HWS Marketplace in HWS 8 again, but it will cost you 1 RP per item.

With this change a couple of things are addressed:

I think it’s easy to understand. You want to sell globally and don’t care about the 10% fee (as doing now)? Let’s see what your RP account will tell you.
Same here: you can still sell items for free (credit and RP) in the HWS Marketplace zone of course.

Alright, I better stop here before leaking more new stuff but the two (three ;)) new changes should be enough for today!

Last but not least this series here will also mean that the HWS Guide will be updated along the way this week. Just for your information and thank you @KptnKurt once again for the complete walk through, fixing the Guide here and there!

Stay tuned for more — it will become more exciting the closer we get to the release date!

Good lord 999 rep for a stack I hope we are gonna get alot more opportunitys to get rep !!!

It’s not about “get rp” or “madness” - it’s about spending your current one very wisely.
And translating to the current gameplay: nobody forces you to do that. Just visit a Trading Zone

But yes, except the big RP reward for voting, you will get some new ways to gain RP in a bigger scale…

After reading the teaser again, seems like RP will be a very different thing in 8.0. I guess there will be lots more ways to get RP, interesting.

Hrmmm. A planet with a crust of RP. Could be a new element. Scientists are baffled.

Glad to help and it’s a poignant victory, being that just as we finished auditing and updating the guide, it will need another light run-through after 8 drops on us all.

I wonder,
If we could remove warp drives and only use gates…
That would force us to actually cruise trough system encounter rate would be higher and SV flying would be more viable.

I think with the new faction RP bonuses, this will be giving an unfair advantage to factions over solo players. But then again, solo life should be hard.

Factions always are at an advantage over the solo players. Ask DM.

If we could remove warp drives and only use gates…

Eleon plans to implement better ingame mechanics to prevent yolo jumps any time (EMP, etc.) but until then we might push Supergates even more.
Titan Orbit will be the first test for stability and usability.

Titan Orbit will be the first test for stability and usability.