Introduction: HWS has structure limits to grant a smooth game experience for thousands of players and to fix some gameplay-related problems not yet addressed. 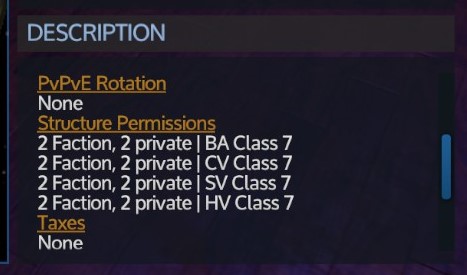 Playfield structure limits may have higher or lower maximum class restrictions than what is shown above. Please refer to the playfield description in the lower right corner on the in-game map (press M) for information and limits specific to that particular playfield.
Rule of thumb: the more intense the PvP playfield is, the smaller the Class Size to get the max. fun out of Empyrion.

Last but not least keep in mind that some playfields have specific rules and settings. For example ECC/ECC Sector:

Elemental Capital City (ECC) is the Mecca of the Universe! It holds every secret, every service, and every treasure that you could hope to acquire. Visiting the Capital City is part of the daily lives for many players and some Origins cannot operate without it. ECC Features The Elemental Capital City Sector has several attractions: HWS Garage HQ (Space) There you will find special CV ships for sale from HWS Garage or players. EGS Recycle & Repair Station In ECC Sector you will find the EGS …

In the event any of the above and/or in-game stated limits are exceeded, the server will take the following actions:

Structures consisting of less than 10 blocks or without a core are considered "‘micro-structures’. If not ‘touched’(interacted with), these structures/vehicles will be deleted by the server after 6 hours.

After 15-days, a structure not ‘touched’(interacted with) will be deleted by the server. You or others must minimally ‘touch’ a structure every 15-days to avoid deletion.

2.3 If a Structure is Deleted

You may submit a support ticket on the HWS Forum — it can be likely restored for free if you report it within 3 days.
However, if it was your mistake and you repeat this mistake, it will cost you in-game credits + HWS RP as follows:

We strongly encourage you to go to HWS Connect > choose your server > click on the HWS Universe Card and check all other limits there!

(Numbers shown are the MAX allowed of each type of weapon, drill, tool, etc.)

If your blueprint is Orange or Red and not allowed on the server, it means the blueprint exceeds the server weapon(s) limit or has an outdated / illegal items.
In Creative Mode (NOT on HWS) you can use the console command
prefabinfo 'name of your blueprint file'

Choose means a decision between the normal Turret or the retractable Turret.
For BAses and CVs it also means certain type decisions.
For example either 5 Pulse Laser Turrets + 5 Plasma Turrets or only 10 Plasma Turrets => You can pick the amount of Turrets out of a group limit.
Choose wisely with our Effective Weapon System in mind!

Retractable Turrets have on HWS 20% more internal armor if retracted and +20% more Hitpoints.